I’ve been trying to find this movie for years

The gist of it is that a female protagonist is trying to locate crystals. I believe it was in order to save her city or kingdom from being destroyed.

It was a movie made sometime between the 90s and early 2000s. I believe it was western style animation. I want to say something similar to the swan princess.

And as for when I watched this it would’ve had to have been at least 10 years ago.

This seems to match The Legend of Atlantis (2004). 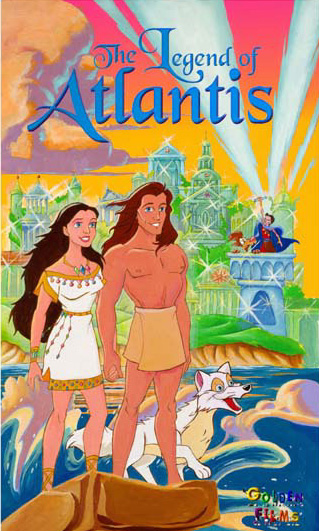 The antagonist is the royal advisor Belial who is trying to collect 4 crystals - corresponding to Earth, Wind, Fire and Water - to gain control over the kingdom. The princess tries to stop this by getting to the crystals first.

There is a scene where Belial looks for a crystal behind a waterfall, but doesn't find anything. The final location of the water crystal is in a grotto that the princess swims into from underwater, but there was a small stream of water falling over it so I guess that could be what you remember.

I don't really remember anything from the movies, but there were Final Fantasy movies released in 1994. I remember seeing 2 of them when I was a teenager-but I thought they were silly and quickly forgot them. As it turns out, there seems to be 4 movies in total. There were multiple protagonists riding a Chocobo bird at high speed, that's all that I can remember from the films.

Copying from the wiki: The main protagonist Prettz is a headstrong and reckless young man with feelings for Linally who rides a motorcycle and uses a nodachi and spiked bombs as his weapons. The other protagonist Linally is a brave, young, blue-haired girl, the direct descendant of Bartz and a novice in the art of summoning (she can only summon Chocobo), and became a vessel for the Wind Crystal after the others were taken. Supporting characters include: Valkus is the bumbling general of the Tycoon air force, leading the flag-airship Iron Wing, who, despite his aggressiveness and large size, is fiercely loyal to Queen Lenna; Rouge, a scantily clad sky pirate captain, with a love for all things shiny, who attempted to take the Wind Crystal from Linally and company, but was captured by Tycoon and held prisoner until Queen Lenna offered her a full pardon if she agreed to aid the others; and Mid, Cid's grandson, an engineer who returns as a ghost to aid the heroes with his advice and general knowledge of historical events important to the series, and, although apparently unable to physically manipulate the world in this state, is clever enough to convince his living allies to complete tasks with words alone.

The antagonist of Final Fantasy: Legend of the Crystals is Ra Devil, a powerful wizard intent on gaining the power of the Void for his own ambition. He steals Cid's brain away in hopes of using its knowledge of the four Crystals to his advantage, assuming his true form, Deathgyunos, once he succeeds.