I read this about a month or so ago, I thought, but I'm not seeing it in my history. The beginning of the story is a familiar one for isekai. A high school class is transported to a fantasy world and are told they are to be heroes, with the main activity being exploring a nearby dungeon. The main character is judged to be of a lower rank than others, and is relegated to a lesser house. One of the initial twists is that the heroes are encouraged to have regular sex with their servants, with more senior heroes being assigned more comely women, and in greater proportion (I remember the artwork being fairly adult, although I don't recall if the genitals were censored). Later, he learned that the female students, rather than designated as heroes, are basically being used as public sex objects (it's normally not revealed to the adventurers, but he gets an offer to participate after bringing a particularly choice cut of meat to a merchant friend) with some sort of magic ensuring their compliance.

One of the things the main character has as an advantage is that, early on, he's offered a tutorial function and he keeps it on, which he finds many others turned off immediately. In the course of speaking with his tutorial (which I think might manifest as either a fairy or a crystal), he learns that they are actually in a world in the far future, an isolated dome where everyone lives in a form of virtual reality. Some aspect of the past has left most residents almost entirely fertile, the people isekaied to the realm are basically being used for their fertility, with the men able to sire children on native women and the imported women being used as broodmares. He also comes a bit to grips with his own voracious sexual appetite (although he's unusual among the adventurers for not sleeping with every woman in the house, he keeps acquiring women that he is exclusive to, and finds that his appetite for them is growing), he comes to realize that one aspect of the magic from them being imported is that, as their levels and skills grow, so does their endurance and sexual appetite, which manifests in the more powerful adventurers as basically having them take any woman who crosses their path, and sometimes leaving them injured from the experience.

I don't recall the adventurer having a particular "cheat" skill, but the combination of the tutorial module and his relatively slow progression (he stayed in the lower levels building up his basic skills before moving on) has made him relatively powerful for his level. Also, as a "lower" hero, he had fewer distractions in terms of the luxury and women thrown at the adventurers. I think it's also implied that, since he was a bit of an outcast, he's been soloing the dungeons. He picks up a Jump skill and manages to combine his strong basic skills with the physics results of the jump to start nearly one-shotting powerful enemies as long as his attack hits and one of the plot developments when I left off was that he found out that some of the items dropped by the bosses he beat gave him some sort of "property rights" on parts of the dungeon, which is why he's been able to bring up such good meat. A later development was him gaining the province of a sea world, which is the only source of seafood, and is supposed to be the sole property of nobility.

At some point, the tutorial interface informs him that he has successfully impregnating some of his chosen servants, and gives him the option to store the embryo for later implantation, which he chooses to do every time. He begins putting some of those "property rights" onto the embryos because the nobility is starting to try to find who has those rights that they consider to be solely theirs. I think that perhaps his "inability" to impregnate the women he's with continues to play into him being considered a lesser hero, and thereby going under the radar.

As per the questions in the comments: I think there were at least a dozen chapters, I think I read the latest translated chapter, which was not the ending of the manga, it was entirely black and white other than maybe the chapter covers, the first few chapters basically involved them being summoned, split into upper and lower heroes (I specifically remember there were two different houses and the upper heroes got better food and more maids, as well as I think better upkeep on the house), and him foraying into the dungeon and learning about the tutorial interface. I think it was only later in the manga that he learned of the true nature of the kingdom One other plot point that came to mind, while answering the questions was that there was one other classmate, I think in the upper class of heroes, who habitually had the same women with him at all times, and who acted in a hostile manner to the protagonist. They eventually wind up talking and it turns out that the other guy had seen the protagonist's tendency to pick up new women, and assumed that he'd still his women as well whereupon the protagonist let him know that he was being selective about the women he acquired.

I think that the title was something along the lines of Instead of Becoming an Adventurer, I Decided To Start a Maid Harem! as per the usual excited long titles for isekai manga.

This is Astro King: Summoned as a Hero, I Turned Out to Be Low Rank, so I Made a Maid Harem!.

After being transported to another world with all of his classmates, Yoshitsune was ordered to conquer the dungeon as a hero. While his peers were all reeled in and tamed by the offer of unlimited sex with the castle maids, Yoshitsune, a low-rank hero, devoted his cheat skills to getting more and more maid wives...

Opening scene has the main character be summoned along with his classmates, and there's a fairy who introduces herself as the guide. 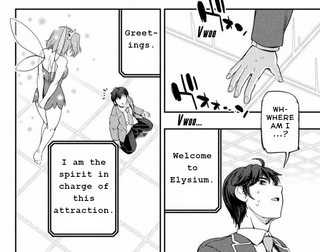 The part about people being largely sterile is also mentioned; 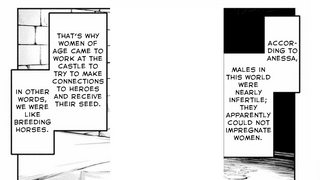 This is just from the first chapter, but it's such a perfect match that I don't think there's any need to check later chapters.

Found by searching mangaupdates for the tags Sexually Active Protagonist and Transported to Another World, filtering out Shoujo, Josei, Shounen-ai, and Yaoi