80s cartoon fantasy movie with hero that has 3 heads

I saw a cartoon movie as a child in the late 80s I barely remember.

In the movie there was a bad guy (a wizard maybe) and a team of heroes that traveled to defeat him. The movie had a fantasy (medieval?) theme. One of those heroes was a eagle human. When they fought against the bad guy the eagle human tried to attack and was thrown (cooked?) in a big cauldron.

Edit: The 1981 Hungarian cartoon The Son of the White Mare has three brothers.

And this scene could be remembered as "triangularly stitched together" - though obviously most kids in 1981 wouldn't have seen this movie.

I look forward to an actual answer with a triangular protagonist.

However I'll propose that perhaps some memories are being mashed up. I hope the other users of this site will forgive an answer attempting to be helpful with multiple suggestions and pictures.

In addition to below suggestions other notable medieval fantasy may include "the Black Cauldron" or the non animated Krull or Dark Crystal.

The movie Gandahar (or Lightyears) has a multi-faced mutant. It also has some bird imagery. The end of the movie is the hero jumping into a brain but there's enough things in the movie that could be remembered as a cauldron. 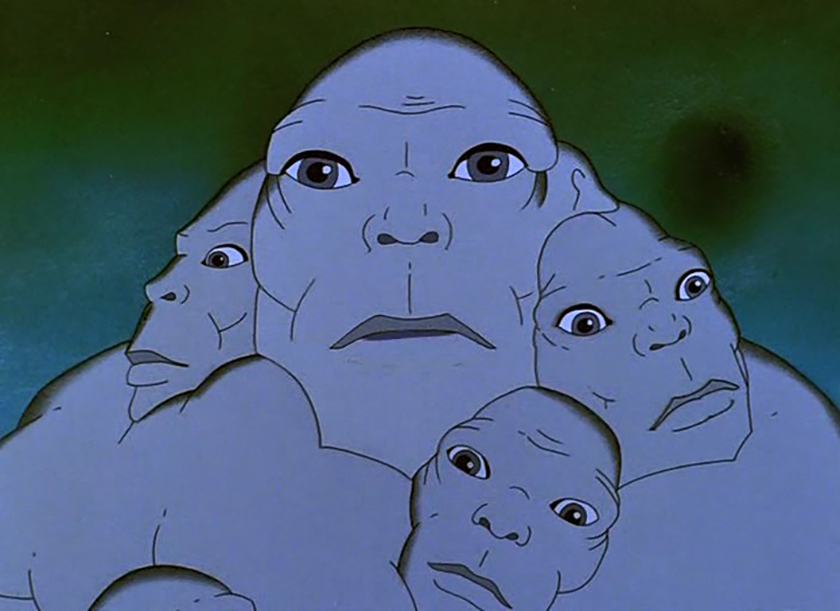 Alternatively episode of He-Man and the Masters of the Universe "Betrayal of Stratos" featuring his flying friend Stratos has eagle motifs and a demon in a cauldron. And since this was a series that raises the potential for more modified memories from multiple episodes.

Edit: Additional speculation noting that Man-E-Faces in Masters of the Universe can switch between three faces. Again I realize this isn't a great match to the original question - but no alternatives have been proposed.

8
What late 80s - mid 90s cartoon had heroes with insect mechs?
13
Cartoon movie where the main character had a robotic arm
9
Old heroic fantasy cartoon
10
Space cartoon from the 80s or 90s
5
80s(?) animated scifi/fantasy movie with spaceships, a fantasy castle, and a princess wrapped up in a carpet by bad guys
2
post apocalyptic movie with eagle-helmet
7
Asian fantasy movie with a medieval setting, and a hero, a princess, and an evil general