I'm searching for a cartoon released in the late 2010s. It may have been from a minor streaming service or small TV network. There was at least one season. I don't know if there was a second.

The main character was a middle aged, male 'chosen one' (in the mould of Buffy the Vampire Slayer) selected to fight monsters. He dressed in cheap black suits and was visually past is prime. He wasn't fat. The setting was modern day but with secret monsters - like Supernatural or, again, Buffy.

The cartoon has action heavy, with blood and gore, but I don't think there was any nudity. 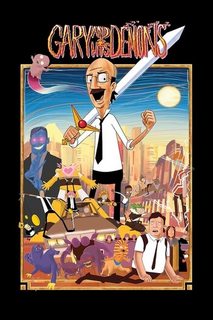 The series opens on aging Gary as he chases what he thinks is his last demon. After a disappointing failed capture resulting in him injuring an innocent homeless boy, Gary returns to the Demon Ministry to attend his own retirement party - his second retirement party in thirty years since Chosen One status is only meant to last fifteen years. Shortly after an underwhelming retirement speech his boss, Leslie, reveals to him that they've once again failed to find his replacement, and she asks him to serve one more term as Chosen One - which would mean fighting until he turns 60. The show revolves around Gary's adventures in demon hunting while also dealing with the frustration of being unable to retire.

Found with a search for cartoon middleaged "chosen one" monsters

5
Cartoon in the late 80's early 90's about dinosaurs with armour on
6
Novel about an alternate history of the Aztec empire from a modern day archaeologist time travelling back there
5
80's Short TV story about a monster in the closet which grabs the mother during the day
3
Old TV show cartoon from the late 70s about a time traveling professor?
3
2010s(?) cartoon: three teens have the power to control monsters to fight other monsters
12
Old cartoon about a modern-day man who gains super-strength by wearing a hat made from Samson's hair
5
Pokémon-like movie where the characters fuse with their monsters. The plot includes a school trip to a museum and an Asian baby that was a king