Why doesn't Carl Lumbly have a starring credit in The Falcon and the Winter Soldier?

In the 2021 MCU series The Falcon and the Winter Soldier, Carl Lumbly plays Isaiah Bradley, a super-soldier who fought during the Korean War. Lumbly is an established actor with decades of screen credits and appears in multiple episodes of the series, more than some of the main credited cast members. At the end of each episode, the credits run, with Lumbly's name nowhere to be found. Why is that? Is it Screen Actors Guild-related?

He was in the end-crawl billing of the episodes New World Order, Truth and The Star-Spangled Man (on Disney Plus).

His billing was similar to other supporting actors who received a similar amount of screen-time, such as Daniel Brühl (Baron Zemo). 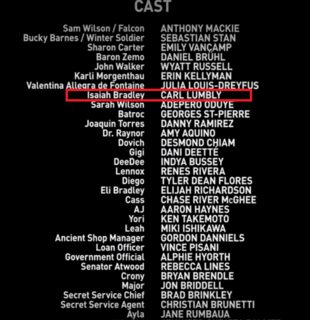 In this instance, billing in the end credits would be determined by Mandated SAG rules. Apparently his agent wasn't confident enough to insist on a main billing.