Book about miniaturization and reading thoughts

I've read a book in the past about I believe an American scientist that has found a technology to read thoughts (eventually to connect brains,) but his research didn't go well.

He was taken to Russia, I believe, to help extract the thoughts of a person by miniaturizing a ship with some scientists and his brain connection machines. It turned out the person had a dead brain.

It was unsuccessful because the person was dead but it proved his technology to be useful to help people connect their brains. At the end he escaped and both countries exchanged technologies in this way preventing one side to have a significant advantage over the other.

I'm not sure if the book was Russian or American, nor the author.

akostadinovakostadinov
23311 silver badge44 bronze badges
New contributor
akostadinov is a new contributor to this site. Take care in asking for clarification, commenting, and answering. Check out our Code of Conduct.
1
Add a comment  |

This is Fantastic Voyage II: Destination Brain by Isaac Asimov. 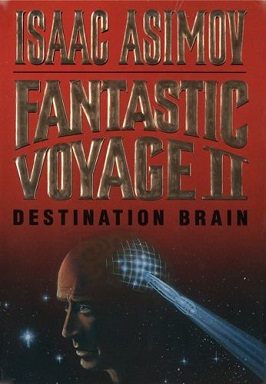 One Soviet scientist, Pyotor Leonovich Shapirov, a pioneer of the miniaturization process, had spoken vaguely of a way to make it affordable. Unfortunately, he now lies in a coma, with his secrets apparently locked away forever.

But Shapirov had been acquainted with an American scientist, Albert Jonas Morrison, who has his own peculiar theories regarding the brain's processing and storage of creative thought. Shapirov had been greatly intrigued by Morrison's ideas, and it's this interest that led the Soviets to turn to Morrison for help.

After a great deal of coercion, Morrison agrees to be miniaturized along with four Soviet scientists, enter Shapirov's dying brain, and attempt to use his computer program to retrieve the thoughts contained therein.

11
Identify book where murdering antagonist uses FTL communication to bypass 3-implant-per-person limit
8
Identify a book and sequel about Mattias Hand, inventor and Prince who is exiled
6
Can you identify a book where brains are harvested and used as computers, bringing them back to life and driving them insane?
24
Short Story about chess playing supercomputers
11
Story about brain implants that were similar to Google Glasses
6
Book series about a torturing doctor on a starship
5
I was reading a book about a boy who was able to travel through time, and i am trying to remember its name
8
Book identification: 90s/2000s novel, American travels to fictional town called Khartoum
5
70s/80s book: Cold-war Psychic superweapons
9
Book identification: children's book about family of vampires