I watched this movie in the early to mid 90s about a small group of teenage like alien boys that landed, possibly due to a tech issue or even crash landing, on earth. They were found by some younger kiddos. One was a little girl.

The alien boys had a very surfer, hippie tone of voice and personality. Super radical type of teen behavior. I can't remember much from the movie itself but the young kids helped the alien boys fix their ship and got them off the planet before they were taken in by the government I believe.

Before they took off, I remember the little girl crying and one of the alien boys telling her not to cry yadayada.

These are shots in the dark memories. First thought everyone thinks of is "explorers" but that is not it. Not the same aliens or story line. The kids in this movie do not build the ship at all. They don't go to outer space.

These teen alien boys come here and need the kids' help getting home. There is a little girl helping them too. Someone has to know what I'm talking about.

In this film, the aliens are Martians - classic little green men - forced to take part in a space war with the Arcturans by an enforcer drone aboard their spaceship. Flying near Earth on Halloween, they pick up a re-broadcast of Orson Welles’ The War of the Worlds and think the Martian invasion is real, so the drone forces them to participate and they land in a rural American town.

Most humans they meet assume they’re kids in fancy costumes, but they are discovered by the local sheriff and his daughter Kathy, a little girl played by a pre-Jurassic Park Ariana Richards, who eventually realise they’re kind of harmless and help them return to space.

There’s sort of a gang of kids - it’s mostly about Kathy, who’s new in town, and the aliens themselves, who kind of fulfil that role. The Martians aren’t kids but they sure behave like goofy teenagers, and some of them have personalities matching what you describe. Kathy does have a couple of trick or treating friends, though, including one kid dressed as a duck. The Martians don’t so much crash as park very badly, though they do damage their ship. The drone also forces them to stay to carry out what it thinks is their mission, and their hyperdrive threatens to melt down near the climax of the film. And there’s definitely a farewell similar to the one you describe, though Kathy consoles the tiny scout robot the Martians bring with them, as well as (or maybe instead of) them consoling her.

So I think it seems a pretty good fit. It’s not seen as a great film but I loved it as a kid and it has some really interesting quirks that have earned it a bit of a cult following. 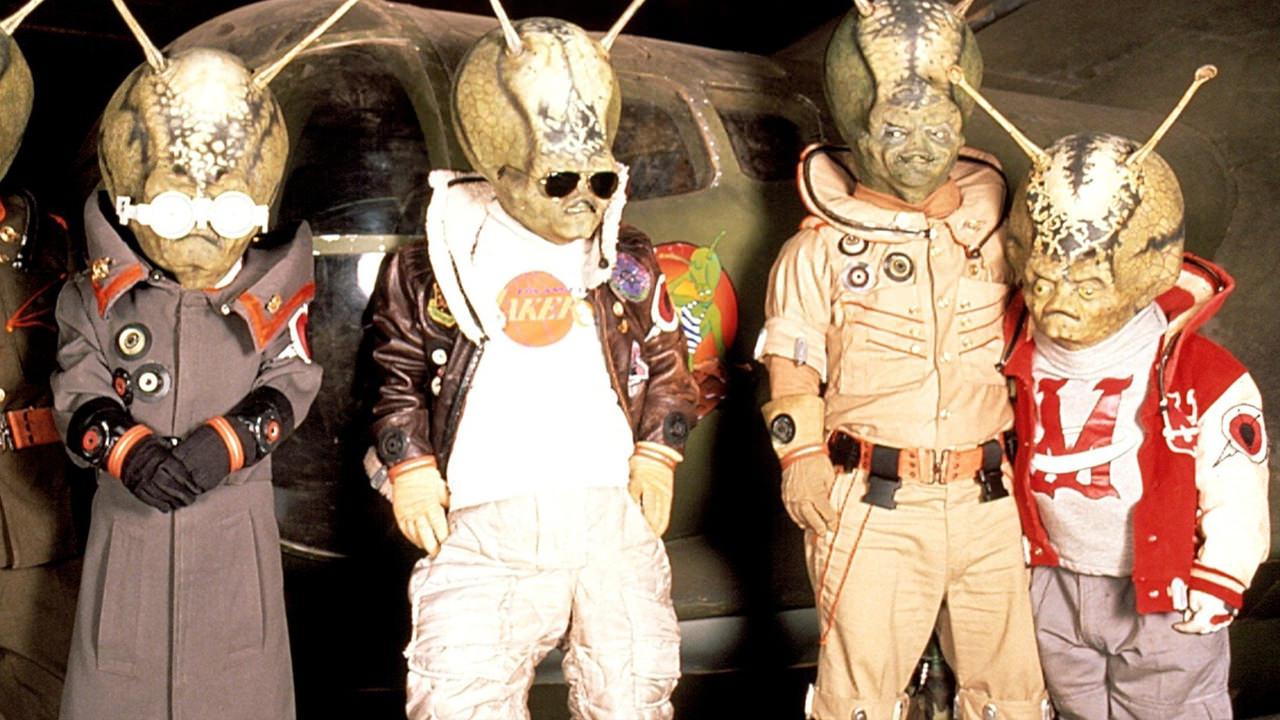 8
Movie about a mysterious girl who turns out to be an alien
12
Obscure kids (non animated) movie/film series from the 90's or so
9
Cartoon movie set on Mars, human kids with alien pet
9
Movie with teenage alien girl living on Earth
5
80's-90's sci-fi kids movie (possibly a live-action Disney), two alien girls stranded on Earth in a ranch/farm
8
I can't remember the title? Post-apocalyptic- Teens run away from cave cult in the desert to the city?
5
What is the name of the anime kids, mecha and fantasy series with a group of 4?
9
Child's science fiction book about kids in space with a metal disk and an alien chasing them after it
3
80s/90s movie: boys go missing at neighbor's house