Book with magic: Soldier [insert number here] ends up with an important girl in a swamp

I read this book or half the book in middle school, roughly around 2012. I can't remember much about the plot, but the book had a purple cover with a picture of purple leather with golden corner frames and some variation spelling of the word magic as the title.

I know there's a boy who doesn't have an actual name, it's "Soldier [insert number here]", who somehow ends up with a very important girl in a swamp. That's how far I've gotten in the book. I've tried Google, Goodreads and even Yahoo. I know the book is real, but I just can't find it.

This is Angie Sage's Magyk, the first book in the Septimus Heap series. 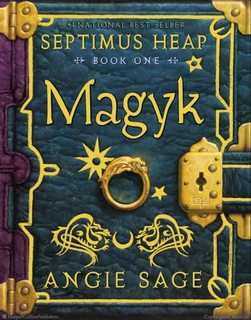 Marcia whisks Jenna to her apartment in the Wizard Tower, where she can temporarily be kept safe. Marcia also finds a boy, part of the Young Army, buried in the snow and close to death. The boy, called Boy 412, is rescued by Marcia and is taken into her apartment to warm up. [...]

The Hunter, accompanied by his Pack, follows the group, heading for the Marram Marshes. [...] The group reaches the Marshes and must navigate through perilous bogs, but eventually reaches a safe cottage belonging to Zelda Heap, Silas' aunt, and a White Witch. Aunt Zelda keeps everyone safe and well-fed throughout the winter.

Jenna is the very important girl (princess). Boy 412 is the Young Army boy soldier who becomes one of the main characters.

It's the first book in a series which I continued reading at least up to the fifth book. If you enjoy this one, you could have a fun ride ahead!

6
Two spacecraft pilots travel at light speed, meet back on Earth in different era due to time dilation
5
Horror anthology-purple cover with "The Open Window" late 80's-early 90's
5
Trying to find a book about a girl in a coma?
12
'The talking head' fantasy book with a girl on a quest with a severed head and a sassy crow
8
Sci-Fi Book involving Aliens with Halos
5
Fantasy book, group of women meets group of (mercenaries?) men, has a shipwreck scene
4
Old sci-fi book where a man is transported to another world, and meets woman with green skin. Involves black floating transport?
12
Book with fire monster, alien girl and dog, and corvette?
18
"Pulp era" story: "Dachwu, remember?"