Not exactly sure whether it was a manga, manhua, or manhwa, but I remember it being colored, maybe, I could be wrong.

I remember it being a story about a demon king, or lord, or emperor, any of those, who the line of demon kings are always destined to lose to the hero, and he does not want to die. So he goes and finds heroes or adventurers to train them high enough level so he could kill them to get experience and level up. Though he doesn't end up actually killing them from the point I remember leaving off at, and he may never will.

Though he thinks he's weak and will automatically lose to the hero, he is incredibly strong. I vividly remember the start of it being him panicking about that and decides to do this hero training plan, and he ends up saving a couple of people who he is deciding to train, the monster he kills barely gives him any exp. Somehow at some point I remember them being in a desert, but at this point it might just be my mind making stuff up. 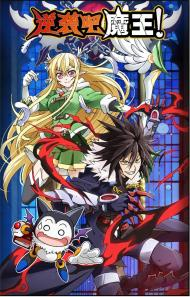 Leaving behind his throne, his wealth, and his women. The Demon King now disguises himself and start raising heroes in his pen?! He even formed a party to level up "newbies"! Aren't this suppose to be the war between Good and Evil?! Caesar mockingly answers: "Rules? I create the rules!"

7
Manga where a teenage boy absorbs others' wounds
7
Dystopian manga set in a post industrial world where old technology is forbidden and everything is steam/air powered
4
Manga whose main character's level keeps resetting at level 15
2
Japanese anime/animated movie where the girl is the key to a world of destruction?
4
Searching for a manga, djinn/jinn who creates a "black hole" or "black sphere"
6
Book about a girl with magic, who can teleport and is mated to a powerful vampire
5
A manga about a demon lord job with a dark-skinned elf woman
3
Manga where the main character can travel through worlds that he thinks are movies
3
Manga/manhwa/manhua about a main character who lived in a different world with wild wolves for hundreds years
6
Isekai manga where the main character has a servant harem in a world where adventurers are imported because residents are sterile