Why isn't there a safeguard to stop people stealing your time in "In Time"?

One thing that surprised me was how easy it was for other people to steal someone's time. It merely took a handshake and some mental will to drain someone else's time – whether they're awake or asleep, co-operating or not.

Why wouldn't the system have included a safeguard to stop people stealing time so easily? Or, even if the basic system didn't have that safeguard, why wouldn't someone have invented such a safeguard?

It's noteworthy that the rich girl character carries "only" a decade with her, and has to be surrounded by bodyguards at all time. But, time isn't like money, where, if someone steals what you're carrying with you, you can just go to the bank and withdraw some more. If someone steals the time you're carrying with you (whether it's a year or a millennium), you're dead and can't go to the timebank to top up! In that context, why wouldn't someone invent a safeguard and sell it to people who wanted to protect their time from theft?

As you noticed there wasn't much of an interface/imput device to the 'time' device upon each persons' arm. This leads really to one logical conclusion; anti-tampering. It does seem rather rediculous that a person could simply steal time from another person so easily, but honestly, muggings are that way. Do you carry something that locks up your wallet to prevent someone simply taking the cash.

I think your question mostly delves into the fraud protection/identity protection aspects of the 'time clock' that each person inherits upon birth in the movie. My observation is that this is totally on purpose; elitism at its finest. The rich live among those who have no need to steal time, while the poor are amongst those who would literally 'kill' for some more time. Fact: Look at the Minutemen (what a clever name!). They were the underground/underworld enforcers of the poor districts, much like loan shark shylocks and low-level mob enforcers. The only reason that these guys (obvious thugs) get away with it is that they serve a valuable commodity; they keep the man down! Not only do they enforce people paying their debts to the time loan banks, but they also keep someone from rising up, aquiring too much time, and somehow buying their way out.

The lack of personal protection against thieves also seem to be a point against the poor; they could protect themselves... only if they could afford it. As the movie exclaims, the system is extremely schewed, and the point was pretty much to keep the poor from ever succeeding. Though someone could theoretically live forever, the numbers to support one immortal must be maintained; how many deer must exist for one lion to live?

Maybe it isn't physically possible to safeguard against; rather like asking why someone doesn't invent a device to prevent guns from firing or nuclear weapons from exploding.

If we assume nanotechnology is involved in keeping In Time citizens both youthful and alive, then modifying or reprogramming the systems involved may be impossible for an enterprising inventor. The computer in front of me contains some key components that I simply cannot usefully modify even if I knew how. I can overclock my Intel Core i7 processor but I certainly can't build my own or modify an existing one to execute a new instruction set. The cost of the tooling is far beyond my means by several orders of magnitude. I wouldn't expect that retasking a complex nanotech system or deploying a new one would be any easier or cheaper.

In the In Time universe, the rich people/governments who control the chip fabs or nanoforges or whatever the key industries are that make the time-based economy possible decided that allowing people to steal time from other each other was better than not. They had their reasons; I won't speculate on them here. But if you're already rich enough under this system to able to tinker with it (probably need to be a billionaire in today's dollars), would you risk your comfortable existence and spend enormous sums just to help people too poor to afford bodyguards? Remember that the penalty for even a small mistake is most likely death.

They do have an anti-theft device, it's called a time storage capsule (prop pictured below in case you want to buy one of your own). Rich people keep their time in vaults, presumably because the idea of toting around more than a few hundreds years is considered a) somewhat gauche and b) a security hazard. On top of that, the wealthy have bodyguards with them at all times to ensure that their personal time is well guarded. 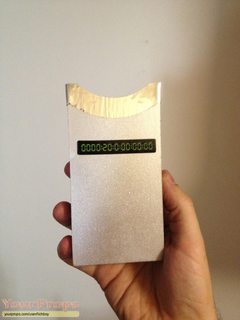 Poor people, on the other hand tend to carry all of their ready cash around with them. The usual rules apply regarding crime and punishment. If someone steals your time, you call the police and they arrest the perpetrator and presumably take your time into evidence while they determine its true owner.

Not the answer you're looking for? Browse other questions tagged in-time or ask your own question.

9
How does the "time" technology stop a person from aging?
6
Do the people in the movie In Time suffer from any diseases?