What story is Shrek's donkey from?

I saw a post on Reddit that implied (without sources) that Donkey was one of the bad boys from pleasure island (Pinocchio), which explained how he can talk.

But I couldn't remember or find online any mention of that origin in the Shrek franchise. Plus Pinocchio has definitely spoken to Donkey in the Shrek movies but again, I don't remember them recognising each other.

I'm also not aware of any stories or fairy tales that mentioned a talking donkey? I am aware that donkey is in the original book (although, I have not read it myself) but regardless of that, many characters from the movie do have a fairy tale (or similar) origin.

What original story is Donkey from, or is the movie character Donkey take from the book Shrek?

Donkey, and Shrek and (technically) Princess Fiona are all from...

The plot of the book is considerably different from that of the film, with the exception of there being a quest for a princess whom the titular ogre marries in the end. Early on, the witch who gives Shrek the quest to find an ugly princess to wed tells him he'll come upon a donkey who will in turn take him to the princess' castle.

While this donkey isn't the wisecracking motor-mouth Eddie Murphy gave us in the film, most of the characters differ from their original versions anyway (Shrek, for example, is a lot more obnoxious than the grumpy recluse of the film, and Fiona is never enchanted to turn into an ogre by night). If there's further inspiration for Donkey from other works, the text of Shrek! makes no mention and the book itself does not include the "all fairy tales are real in this world" array of characters found in the movie series. 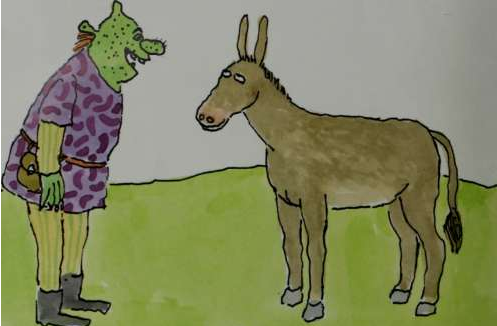 The donkey raised his sleepy eyes and brayed:

However, per edits made to the question, movie-Donkey's in-universe origin/basis is left a bit up for grabs with implications made in Shrek 2 that it was related to the story of Jack & the Beanstalk. Additionally, the Shrek wiki posits that Donkey may be related to a fable by Aesop of a stubborn donkey due to a line from the first film where Donkey promises never to be stubborn again to avoid being arrested; this may be possible but the donkey in Aesop's fable never spoke and the general "stubbornness" of the animal is not necessarily related to the fable itself. The wiki also mentions that the film's creators wanted Donkey to be a human turned into a donkey by a wicked witch, per the audio commentary; humans being turned into animals or otherwise punished by magic-users is a common enough subject in a wide variety of fairy tales, but as with the Aesop suggestion, that part of Donkey's backstory may not be considered valid as it was apparently scrapped or never alluded to.

In Shrek 2, Donkey claims to have belonged to Jack of Beanstalk fame.

He then meets Puss in Boots, and becomes jealous, as he is spending a lot of time with Shrek. By the end of the film, they are great friends. At one point in the film, he reveals that he was the donkey traded by Jack for the magic beans, which greatly offended him. He and Shrek ended up drinking the "Happily Ever After" potion from the Fairy Godmother's workshop and while Shrek transformed into a handsome human, Donkey became a magnificently bred and handsome white stallion (albeit with the same buck teeth and voice, and on the bottle it read that the potion is not for those with nervous disorders, after which Shrek and everyone else stares at Donkey as it is strongly hinted that Donkey has one, but he remains clueless as to the reason of why everyone is staring at him.)

First there was the time that old farmer tried to sell me for some magic beans.

Then this fool had a party and he have the guests trying to pin the tail on me.

Then they got drunk and start beating me with a stick, going "Piñata!!"

What is a piñata, anyway?

It may be worth noting that Jack Andy Beanstalk shows up in Puss in Boots, but has no interaction with Donkey in that film.

Given the heavy preponderance of Brothers Grimm characters and motifs throughout Shrek, it would be very surprising if Donkey wasn't at least partially inspired by the titular diminutive donkey in the Grimm's Fairy Tales story The Little Donkey, which features a prince in the guise of a talking ass as its main character.

Thus they raised the little donkey. He got bigger, and his ears grew up straight and tall. He was a very cheerful sort, jumped about, and played. He was especially fond of music, so he went to a famous minstrel and said, "Teach me to play the lute as well as you do."

SHREK: Listen, little donkey. Take a look at me. What am I?

DONKEY: (looks all the way up at Shrek) Uh ...really tall?

The earliest story I can think of with a talking donkey is Baalam and his ass, from chapter 22 of the Book of Numbers. I cannot think of any reference to that story in the film, but perhaps it indirectly inspired some of the other European folklore about talking donkeys that the donkey brings up in the book.

Donkeys in general appear in a lots of fairy tales.

In "Die Bremer Stadtmusikanten" (Musicians of city Bremen) it has a main role and can sing. But it is never clear, if it can talk to humans. In the story it mainly talks to his collagues: a cat, a dog and a rooster.

In "Der gestiefelte Kater" (Puss in Boots) the 3 boys of a died miller get: oldest the mill, second the donkey and third the cat. Which then get boots and start the magic.

In "Tischlein deck dich, Esel streck dich, Knüppel aus dem Sack" (Table prepare yourself, Donkey stretch yourself, truncheon out of the bag) one of three brothers gets a magic donkey which is able to poop golden coins.

Ali Baba transports the treasures with a donkey, Josef and Maria are drawn with a donkey too. In the old french version of "Allerleirauh" the fleeing girl is dressed in the skin of a donkey, to live "invisible" in the woods.

Donkeys were the working and riding animals of the poorer people. They were used to pull vehicles or help in farming at the field. They turned even some kind of mills. Donkeys where one of the commonst and most important animals in the time, the fairy tales talking about.

And they are famous to be "stubborn"(see "Der kleine Muck"/The small boy Muck, when the fools be grown donkey's ears) but they simple do not flee from danger but stand still and think first (in opposite to horses).

So if the author searched for an intelligent unusual pet-friend for Shrek with connection to the fairytale times, a donkey is absolute logic :)

12
What happens to Dragon after Donkey & Shrek drank the Happily Ever After potion?
3
How does Shrek's rescue party reach him so fast at the end of Shrek 2?
12
Does Donkey even have a real name at all?
12
Why wasn't Donkey afraid of Shrek?
15
What is Farquaad’s first name?