Do we ever see a hobbit use their natural ability to “disappear”?

The Fellowship of the Ring prologue contains the following information about hobbits:

They possessed from the first the art of disappearing swiftly and silently, when large folk whom they do not wish to meet come blundering by; and this art they have developed until to Men it may seem magical. But Hobbits have never, in fact, studied magic of any kind, and their elusiveness is due solely to a professional skill that heredity and practice, and a close friendship with the earth, have rendered inimitable by bigger and clumsier races.

Do we ever see an example of a hobbit using this skill in either The Lord of the Rings or The Hobbit when not being assisted by Elven cloaks or the Ring? Otherwise, why did Tolkien draw attention to it? Was it purely to explain why we don’t see hobbits nowadays to reinforce the idea that The Lord of the Rings is a historical work?

In the chapter Three is Company:

For a short way they followed the lane westwards. Then leaving it they turned left and took quietly to the fields again. They went in single file along hedgerows and the borders of coppices, and night fell dark about them. In their dark cloaks they were as invisible as if they all had magic rings. Since they were all hobbits, and were trying to be silent, they made no noise that even hobbits would hear. Even the wild things in the fields and woods hardly noticed their passing.

In the same chapter, the movie scene with the Ringwraith plays out, though slightly differently; the Ringwraith stops and seems to be sniffing them out, then suddenly trots away:

The other two ran quickly to the left and down into a little hollow not far from the road. There they lay flat. Frodo hesitated for a second: curiosity or some other feeling was struggling with his desire to hide. The sound of hoofs drew nearer. Just in time he threw himself down in a patch of long grass behind a tree that over-shadowed the road. Then he lifted his head and peered cautiously above one of the great roots. [...] From inside the hood came a noise as of someone sniffing to catch an elusive scent; the head turned from side to side of the road. [...] At that moment the rider sat up, and shook the reins. The horse stepped forward, walking slowly at first, and then breaking into a quick trot.

The Hobbits get caught again while loudly singing, at night when the Ringwraiths can see, and only the intervention of the Elves saves them:

The hoofs drew nearer. They had no time to find any hiding-place better than the general darkness under the trees; Sam and Pippin crouched behind a large tree-bole, while Frodo crept back a few yards towards the lane. It showed grey and pale, a line of fading light through the wood. Above it the stars were thick in the dim sky, but there was no moon.

Once more the desire to slip on the Ring came over Frodo; but this time it was stronger than before. So strong that, almost before he realized what he was doing, his hand was groping in his pocket. But at that moment there came a sound like mingled song and laughter.

In short, like the quote says, this isn't a supernatural ability - they're just very good at moving quietly and quickly hiding. And yes, it does seem to be in part to tie it in as historical - in the same paragraph you quote, Tolkien says they are still around today, and then explains why seldom see them.

Even in ancient days they were, as a rule, shy of ‘the Big Folk’, as they call us, and now they avoid us with dismay and are becoming hard to find. They are quick of hearing and sharp-eyed, and though they are inclined to be fat and do not hurry unnecessarily, they are nonetheless nimble and deft in their movements. (Prologue)

Bilbo demonstrates his ability to disappear into the forest in chapter 2 of The Hobbit, "Roast Mutton." First, after Thorin sends him off to investigate the firelight they see, Bilbo moves with absolute stealth. The emphasis in the narration is on the silence with which he moves, but he is equally unseen and unheard.

Off Bilbo had to go, before he could explain that he could not hoot even once like any kind of owl any more than fly like a bat. But at any rate hobbits can move quietly in woods, absolutely quietly. They take a pride in it, and Bilbo had sniffed more than once at what he called "all this dwarvish racket," as they went along, though I don't suppose you or I would notice anything at all on a windy night, not if the whole cavalcade had passed two feet off. As for Bilbo walking primly towards the red light, I don't suppose even a weasel would have stirred a whisker at it. So, naturally, he got right up to the fire—for fire it was without disturbing anyone.

He presumably could have stayed and watched the trolls without getting caught, or made his way back to the dwarves (which is what he was supposed to do) without their ever knowing he had been nearby. However, Bilbo unwisely tried to pick Bill's pocket and got himself caught. However, after the dwarves finally show up looking for him, Bilbo manages to disappear into the bushes yet again.

Thorin came last-and he was not caught unawares. He came expecting mischief, and didn't need to see his friends' legs sticking out of sacks to tell him that things were not all well. He stood outside in the shadows some way off, and said: "What's all this trouble? Who has been knocking my people about?"

"It's trolls!" said Bilbo from behind a tree. They had forgotten all about him. "They're hiding in the bushes with sacks," said he.

A nice pickle they were all in now: all neatly tied up in sacks, with three angry trolls (and two with burns and bashes to remember) sitting by them, arguing whether they should roast them slowly, or mince them fine and boil them, or just sit on them one by one and squash them into jelly: and Bilbo up in a bush, with his clothes and his skin torn, not daring to move for fear they should hear him.

Tolkien even illustrated Bilbo in hiding (which is actually the only front view of Bilbo's face he ever drew). 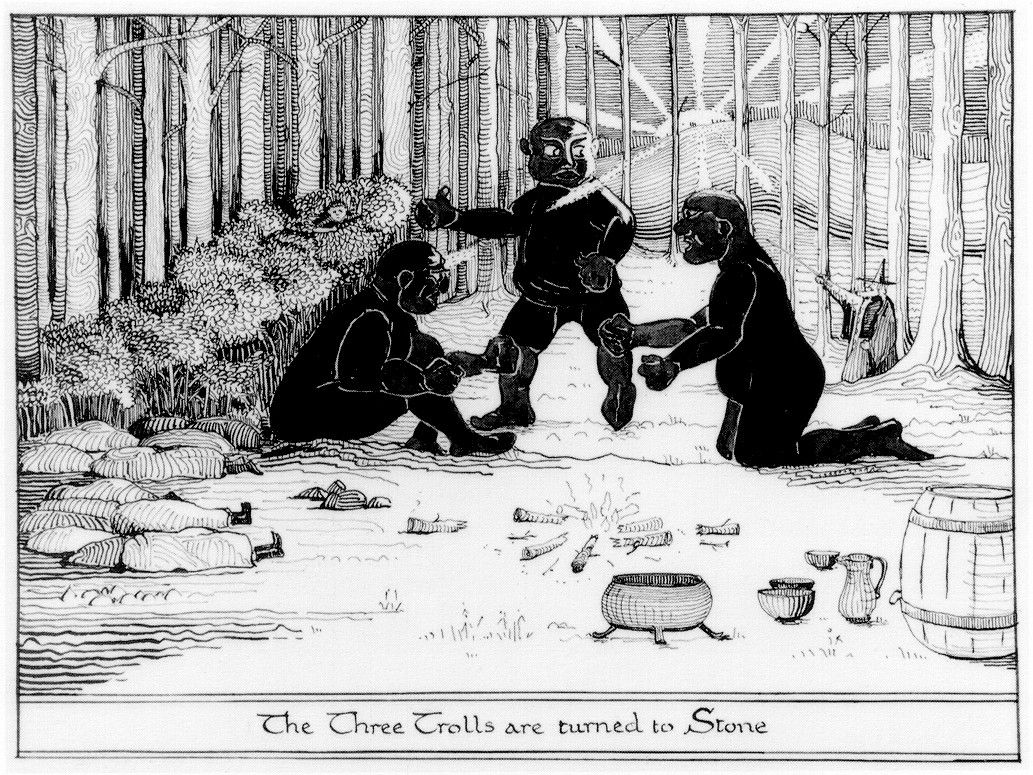 In both the movie and the books, the quartet of Hobbits fleeing the Shire and Buckland were quite adept at skipping the notice of a ringwraith who got down on all fours to sniff after them when they were literally hiding underneath its nose.

Merry was overlooked by the Witch King. Does that count?

It's not always a misfortune being overlooked,' said Merry. 'I was overlooked just now by -- no, no, I can't speak of it.'" ~ ROTK Chapter 8

As to whether Merry still had an elven cloak on when he was 'overlooked' by the Witch King - that's a good question. I think not. When they arrive in Fangorn, Pippin asks Merry:

How are out supplies?

Low, said Merry, We ran off with nothing but a couple of spare packets of lembas, and left everything else behind... And not a wrap or blanket, said Merry, We shall be cold tonight whichever way we go.

I took that to mean that the cloaks, and their packs, were either looted by the orcs earlier or in any case left behind when Grishnakh carried them away from the orc camp.

40
Did J.R.R. Tolkien ever write a deeper connection between The Hobbit & The Lord of the Rings: The Fellowship of the Ring?
96
The use of the word "guns" in The Hobbit
23
How much did Tolkien write about the connection between WWI and his work?
6
How many Hobbit clans/families have 'feet' in their surnames?
9
Did Tolkien ever explain why he mentioned Gondolin in The Hobbit?
6
From whence comes Tolkien's history of the Mûmak (Oliphaunt) and its demise?
30
Was "The Hobbit" book ever abridged?
14
How come Balin and Dwalin never mention their travel with Thrain II in The Hobbit?