I have suddenly remembered with a painstaking level of detail a supernatural short story I have read in the late '90s or early '00s, most likely in Italian or - less likely - in English in a school anthology book, but my search engine skills have failed me badly and I can't identify it.

The protagonist is an artist that, after being struck by inspiration, draws a corpulent man under trial, in the defendant seat, nervously crumpling his hat among his hands and looking very disconcerted. Content with his drawing, the protagonist then goes to the city for a walk and sees a gravestone with his own name and the current date in front of a shop.

The owner of the shop - the sculptor - turns out to be the man he drew in his cartoon. Finding out about this incredible coincidence, they decide to have dinner together, after which the protagonist starts writing something in his diary about hearing the sculptor preparing his tools for something.

The story ended there, but the implication (never stated explicitly) was that the sculptor murdered him - effectively making the gravestone predicting his death and the cartoon predicting the trial that would have ensued.

If the story was in text I think it was August Heat by William Fryer Harvey. You can read the entire story here.

"The protagonist is an artist that, after being struck by inspiration, draws a corpulent man under trial, in the defendant seat, nervously crumpling his hat among his hands and looking very disconcerted. "

The final result, for a hurried sketch, was, I felt sure, the best thing I had done. It showed a criminal in the dock immediately after the judge had pronounced sentence. The man was fat -- enormously fat. The flesh hung in rolls about his chin; it creased his huge, stumpy neck. He was clean shaven (perhaps I should say a few days before he must have been clean shaven) and almost bald. He stood in the dock, his short, clumsy fingers clasping the rail, looking straight in front of him. The feeling that his expression conveyed was not so much one of horror as of utter, absolute collapse. There seemed nothing in the man strong enough to sustain that mountain of flesh.

"Content with his drawing, the protagonist then goes to the city for a walk and sees a gravestone with his own name and the current date in front of a shop."

Mr. Atkinson finished his work, spat on the ground, and got up with a sigh of relief. "There! what do you think of that?" he said, with an air of evident pride. The inscription which I read for the first time was this --
SACRED TO THE MEMORY
OF
JAMES CLARENCE WITHENCROFT.
BORN JAN. 18TH, 1860.
HE PASSED AWAY VERY SUDDENLY
ON AUGUST 20TH, 190-
"In the midst of life we are in death."

A man was sitting with his back towards me, busy at work on a slab of curiously veined marble. He turned round as he heard my steps and I stopped short. It was the man I had been drawing, whose portrait lay in my pocket.

"Finding out about this incredible coincidence, they decide to have dinner together, after which the protagonist starts writing something in his diary about hearing the sculptor preparing his tools for something"

We are sitting in a long, low room beneath the eaves. Atkinson has sent his wife to bed. He himself is busy sharpening some tools at a little oilstone, smoking one of my cigars the while. The air seems charged with thunder. I am writing this at a shaky table before the open window. The leg is cracked, and Atkinson, who seems a handy man with his tools, is going to mend it as soon as he has finished putting an edge on his chisel. It is after eleven now. I shall be gone in less than an hour. But the heat is stifling. It is enough to send a man mad.

Was the story a comic? In that case, it might be the story "Impending doom" from Tales from the Crypt #20 By Johnny Craig.

It has some notable differences in how the image looked and where the stonecutter lived, but the story is basically the same.

The story is about an artist who draws the face of a horrified man without knowing why. 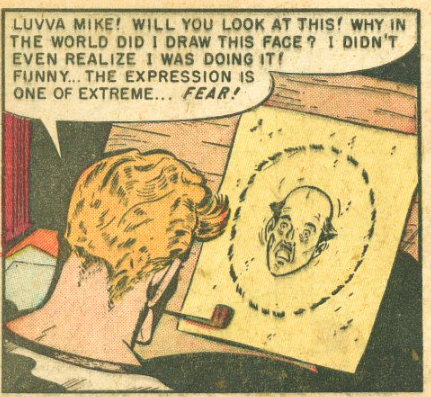 The good weather inspires him to take a walk and he passes the house of a stonecutter. The stonecutter is finishing a gravestone that has the artist's name on it and today's date. 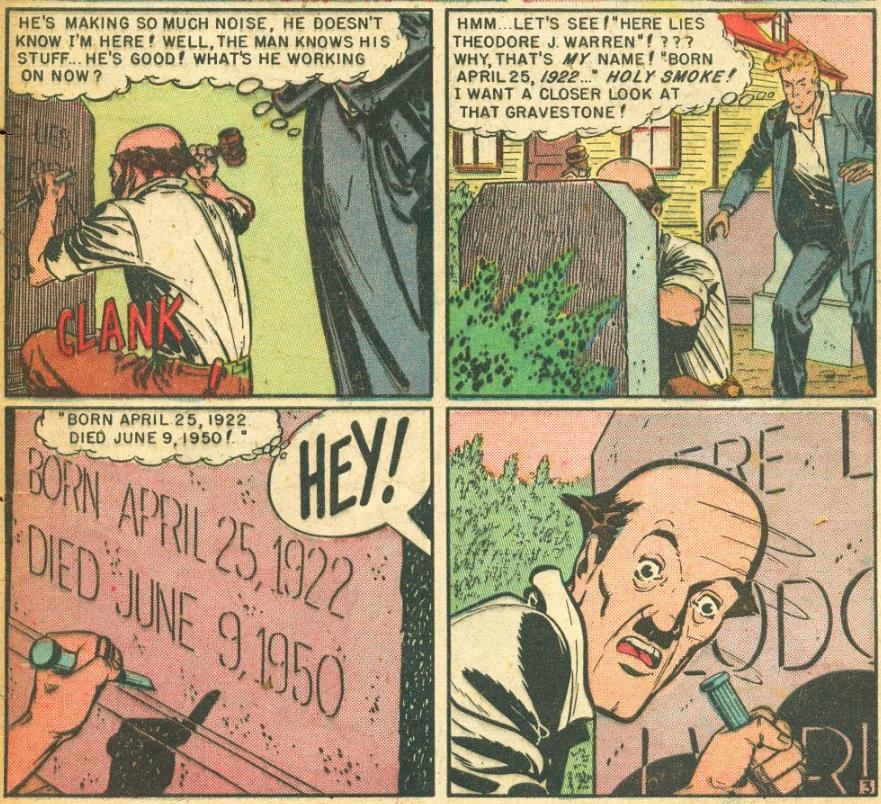 The stonecutter hears the story and is shown the picture. Both of them are intrigued by this mystery, thinking it is an omen, and the stonecutter introduces the artist to his wife. The wife then invites the artist for dinner. It turns out that the wife and that artist know each other since old when they were lovers. The stonecutter does not take this well. 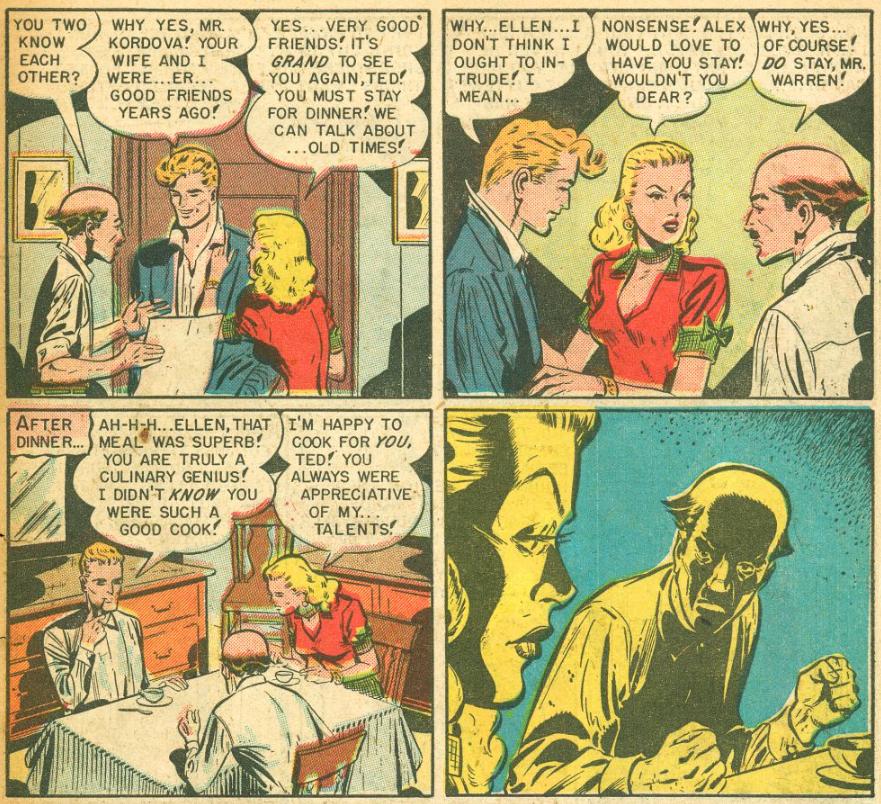 While the stonecutter leaves them alone to finish some work they take the chance to rekindle their old flame. The stonecutter however catches them and kills the artist in a fit of jealousy. 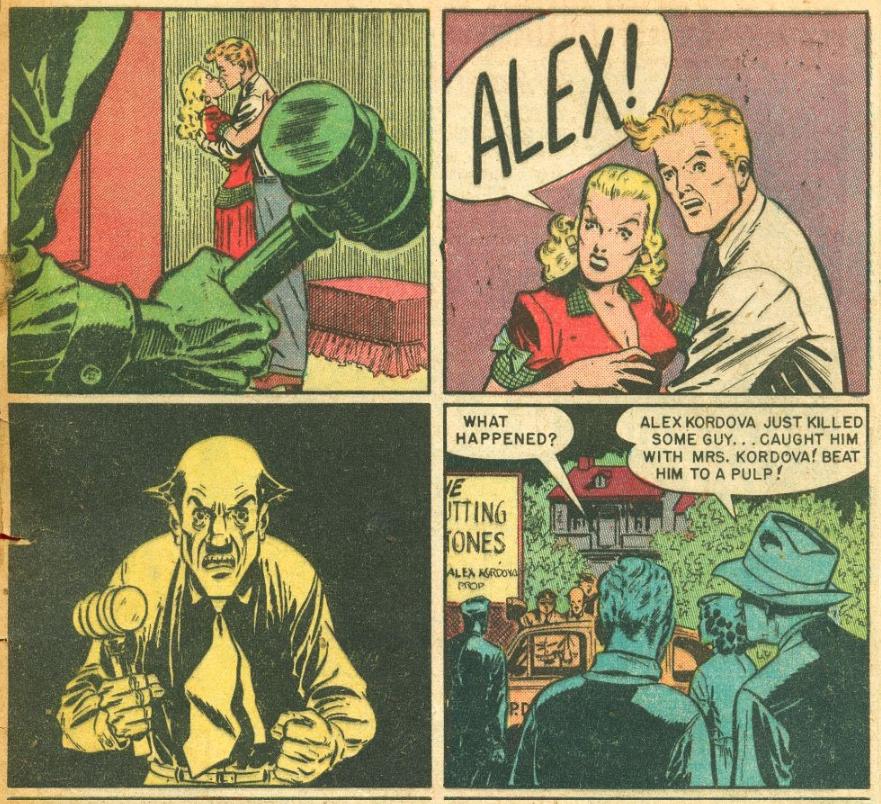 In the end, the stonecutter is hanged, with the expression that he had on the artist's image.

11
Looking for story about man on televised trial, presents plans for laser gun
11
Story About Boy Finding Out His Relative Time Travels
11
Identify a short horror story about a cursed man with imps crawling under his skin
11
A short story about a word that is always the right answer
8
Story about shadow people who measure a tree before a car accident
15
Looking for a sci-fi story about a prisoner and a universal solvent
9
Short story about a man finding out his (ex?)wife is a rebel leader of a robotic society
11
90s (or earlier) short story involving a process of cellular cleaning that involved temporarily liquifying someone into a swimming pool