How are the Green Lantern Corps Sectors arranged?

How are the Green Lantern Corps Sectors arranged? I know 0001 is Oa, but how are they arrayed through the universe? Are they amorphous shapes like terrestrial geography or is there some uniformity in spatial size?

Despite the name of the Guardians (who call themselves the Guardians of the Universe) the correct name for the regions of our galaxy which their Green Lantern Corp have jurisdiction seems limited to our galaxy proper and has been called 'The Oan Protectorate'.

To be perfectly honest, DC has never clearly defined the regions effectively even though they have happily assigned sector after sector in different stories eventually having to compile a list of sectors used. See: Sector Guide > Book of Oa.

For the record, I have problems with the Green Lantern Corp only needing 3600 members to patrol the entire Universe (hence my assertion they only patrol our galaxy or local group of galaxies) given that our galaxy alone has 200+ billion stars, it means that each member of the Corp in our Galaxy alone had 5,555,558 stars to patrol!

A correction that I was recently reminded of. In the GLC of the DCnU, there are 2 Green Lanterns per sector making a total of 7200 (give or take, Green Lanterns working for the Guardians) at any given time. 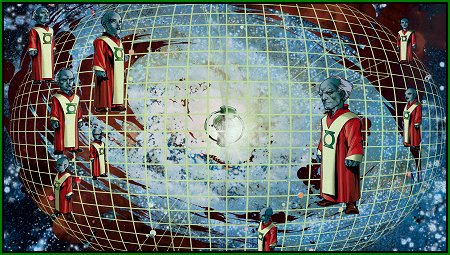 For a listing to the sectors and the Green Lanterns who patrolled them in the Post-Crisis but not necessarily DCnU universe, you can read the listings at the Book of Oa. They do their best to keep up with the changes in the DCU but it is a never ending task.

The back part of each slice may not have a 'crust', meaning that each sector goes on to infinity...or at least the known universe according to the Guardians.

In the mini-series Tales of the Green Lantern Corps, writer Mike Barr said the 3600 sectors were arranged "like the spokes of a wagon wheel" each one tenth of a degree of the circle. The problem with that layout, as with the layout depicted above, is that each sector is an ever-widening arc or conic section, extending to the end of the universe, meaning effectively that each sector is infinitely large.

The main conceit of the sectors starting at Oa was that it meant that technically, Oa was in every Corpsman's sector, and as such could be called to report there while still maintaining patrol in their sector.

There was also an assertion for some time that the sectors were of irregular size - some sectors had many planets but were smaller, and vice versa. IIRC, G'nort Esplanade Gneesmacher, when he became an official GL, was given one of the few sectors that was almost entirely empty.

It's fair to assume that the appellation saying they guarded the entire universe is indeed a combination of ego and marketing. "Guardians of the Virgo Supercluster" seems a bit off.