Do the four brothers in TMNT train in other weapons?

So I've been watching a lot of the 2003 TMNT cartoon, and I've noticed that whilst they claim to be ninjas they only seem to use their own iconic weapons.

Is there any evidence that they train with other weapons? I'm not asking about just use, I mean proper training, involving kata or some such?

Because I like to pretend all the reboots and remakes share a sort of pseudo-canon I'm happy for answers from the comics or other cartoons.

All of the turtles were trained by Master Splinter who learned his martial arts from his owner before he was mutated. He taught the Turtles all the martial arts they knew and each Turtle is quite capable no matter what weapons they used. They are all capable open-hand fighters and able to use any weapon they have at hand when necessary.

When the original comics were written, each had chosen a signature weapon that suited their mental preferences and combat styles. Eastman and Laird showed many examples during their appearances in the comic series. The cartoons were far less likely to show such training since the cartoons were often a marketing tool for associated toys. 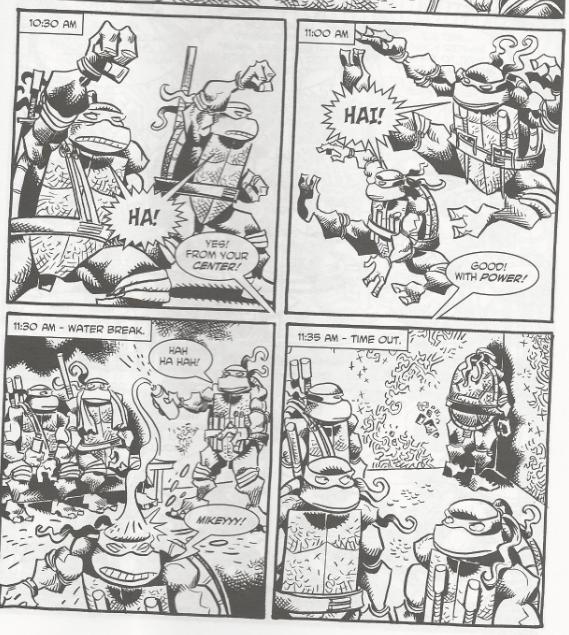 The Turtles trained from 7:00 AM until noon. Master Splinter extols that diligence is the only path to mastery. Tales of the TMNT (Vol. 2) #55 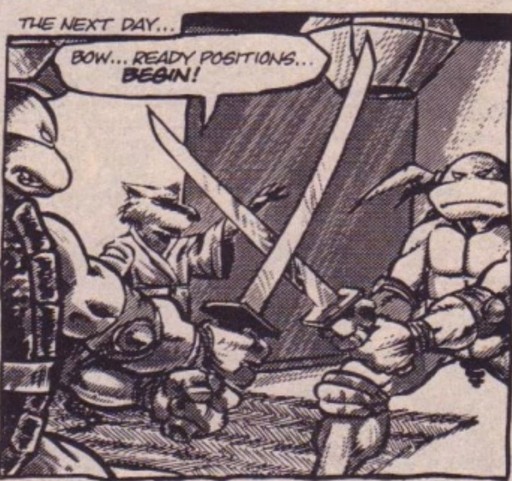 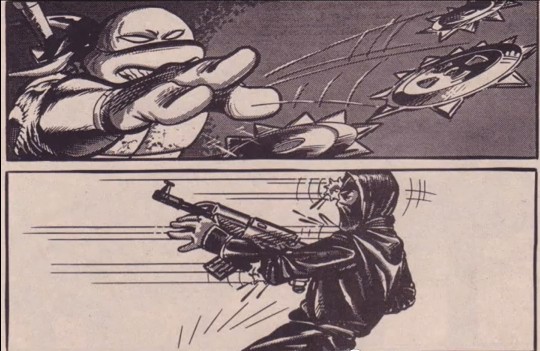 Do the four brothers in TMNT train in other weapons?

Well, Thaddeus Howze's answer already established that, yes, they did. There are other examples from the early comics as well.

Eastman and Laird's first sketches of a ninja turtle (later cleaned up and inked, as seen here) were both with nunchucks... awkwardly tied to the back of the arms for support rather than ready to be used as weapons. As they began to realize what a truly fun idea their truly ridiculous idea actually was, Eastman sketched and Laird inked this image

Put them into Daredevil's origin story, given them a mentor, and give that mentor a reason to restore his honor and that's the entirety of Issue #1 right there. Everything else grew from the rapid success of that first issue and the decision to run an entirely separate kid-friendly universe for the first TV show.

In other words, the turtles have been identified by their weapons longer than they've even had identities. The identities came from the weapons first, before they even had a story, and have continued on through every iteration of the concept. The TV show used color-coded headbands but the original series used all red masks in a black-and-white medium: having the turtles use their different preferred (or possibly only-available) weapons was the way you could tell them apart at all.

Not the answer you're looking for? Browse other questions tagged weapon teenage-mutant-ninja-turtles or ask your own question.

7
How does TMNT relate to other series from the Turtles franchise?
7
How are the mutants in TMNT different?
6
Why is Splinter's origin inconsistent in the various TMNT series?
10
Does the TMNT episode 'The Darkness Within' reference a specific H.P. Lovecraft story?
19
Are there any other weapons designed using lightsaber technology?
6
How did the turtles acquire their weapons?
4
Book with short stories, one about cars with weapons other about sports with war
10
Name of the song used in TMNT 2 HBO commercial