Is there any basis for The Destroyer in Norse Mythology?

So I'm re-watching the film Thor, and it goes without saying that it is based on Norse mythology. After watching it the first time, I read an introductory, but fairly thorough book of Norse mythology, to see how close Marvel's "re-imagining" was to the original mythos.

On re-watching it this time through, I came to wonder... is there any basis in the original Norse mythology for The Destroyer? I don't recall anything like it in the stories, but like I said, the book I read was somewhat introductory.

Does anyone know whether there is or is not a mythological basis for The Destroyer?

There is no direct basis for the Destroyer in Norse mythology. However, I can make the case that it is consistent with it.

First, how many minor gods and goddesses are extant in this pantheon? Wikipedia suggests forty or more, and some of the sagas and eddas hint that the real number is far higher. Add in all the other not-quite-divine supernatural beings part of this mythology, and the proper count is in the high hundreds or even thousands.

Now if each of these deities has their own magic weapon(s) or item(s) of which we only know of a few, how many more can be assumed and what of their nature? There are at least several smiths and sorcerers in Norse mythology capable of creating something like the Destroyer.

Second, let me borrow from another European mythology to the south: that of the Greeks. In Greek mythology there is a humanoid being made of metal, that of Talos. This was the creation of the cyclopes instead of Hephaestus in some accounts, so such things don't even require divine construction. Additionally, Talos acted as the guardian of an island, defending it from Jason and the Argonauts in the same fashion that the Destroyer defends Asgard from its own threats.

In other words, such things would not necessarily be inconceivable to ancient peoples.

Considering these two points, I don't find the Destroyer to be ultimately inconsistent with Norse mythology.

The Destroyer was created as a threat capable of being a challenge to Thor in its early appearances. The Destroyer first appears in Journey into Mystery #118 (Jul. 1965) and was created by Stan Lee and Jack Kirby.

Since it could be inhabited and controlled by a spiritual/magical being, it made the perfect weapon for Loki to get an opportunity to get the physical upper hand on Thor. Loki has taken control of the weapon more than once and has nearly beaten Thor to death on more than one occasion. It would be nearly fifteen years later before a story would be created which would give the Destroyer a real reason for existing. 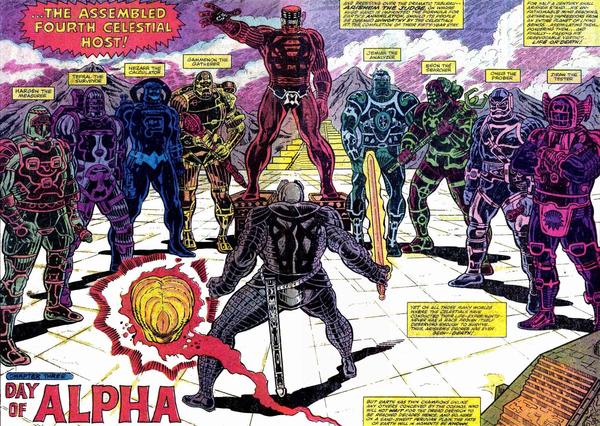 The Gathering of the Celestial Host in Thor #301

In Thor #301 we learn the Destroyer was an object created by all of the Earth-616 Skyfathers as a Final Solution in case of the eventual return of the Celestials, cosmic beings at least partially responsible for mutation in the human genome of the Marvel Universe. The Celestials would be coming back to Earth to judge it and if found unworthy, they would destroy the Earth.

See: What was the ultimate origin of Asgardians?

Odin, leading the Skyfathers, would absorb the souls of all the Asgardians (except Thor) inhabit the Destroyer and armed with the Oversword of Asgard, the deities of Earth would confront and challenge the Celestials. Despite its amazing capabilities against any and all forces on Earth and Asgard, the Destroyer performs poorly and is destroyed almost effortlessly by the Celestials. 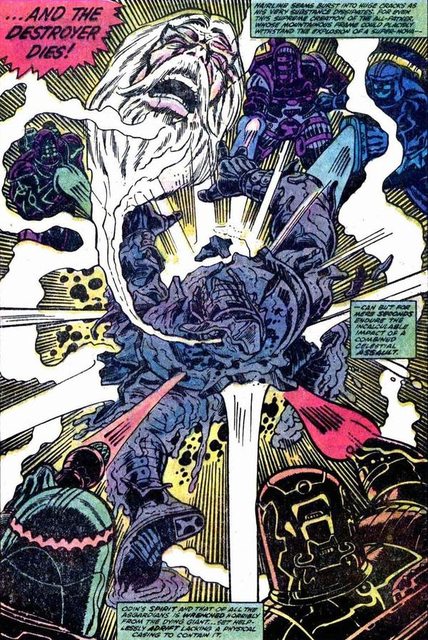 The destruction of the Destroyer by the Celestials

Not the answer you're looking for? Browse other questions tagged marvel thor-marvel mythology origins or ask your own question.

37
How did Odin lose his one eye & why couldn't he fix it?
8
What was the ultimate origin of Asgardians?

6
In “Fear Itself,” did Matt Fraction base his additions to the Thor-canon on actual Norse mythology?
5
Is there a name for a vampire werewolf hybrid in mythology?
8
Ragnarok in space?
15
Why did early Marvel writers change Thor from his legendary red-haired appearance in Norse mythology?
26
How did humans know about Thor and Loki?
2
What are the differences between different Bulfinch versions?
4
Did Tony base J.A.R.V.I.S. off of the real Avengers butler?