What was the "Watcher in the water"?

In the Fellowship of the Ring, our heroes encounter a creature called "The Watcher in the water" which was guarding the Doors of Durin, the ancient and abandoned entrance to the Mines of Moria. What was it? It isn't revealed in the trilogy. Is it explained in any of Tolkien's notes?

It appears to be some kind of vaguely defined underground lake Kraken or similar dungeon lurker.

Outside of The Fellowship of the Ring it is only mentioned in The History of The Lord of the Rings which contains some of Tolkien's notes. 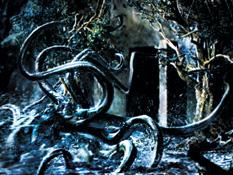 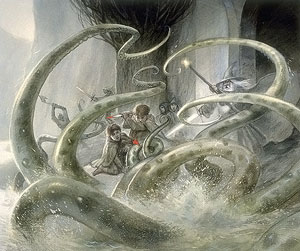 From Watcher in the Water on Wikipedia:

Since Tolkien never explicitly stated what the creature is, others have felt free to speculate on its identity and origins. In A Tolkien Bestiary, David Day calls the Watcher a kraken; however, he also implies that there are some differences between the kraken of Scandinavian folklore and the Watcher in the Water. However, Tolkien never called the Watcher a kraken nor described the presence of krakens in Middle-earth. In The Complete Tolkien Companion, J. E. A. Tyler postulates the Watcher was a cold-drake: "...these dragons rely on their strength and speed alone (the creature that attacked the Ring-bearer near the Lake of Moria may have been one of these)." Another writer compared it to squids.

The accepted answer is excellent, but I'd like to add that we just don't know.

Within the works it's not even 100% clear that the Watcher is one creature or a number of independent snake like creatures working together.

‘I felt that something horrible was near from the moment that my foot first touched the water,’ said Frodo. ‘What was the thing, or were there many of them?’ ‘I do not know,’ answered Gandalf; ‘but the arms were all guided by one purpose. Something has crept, or has been driven out of dark waters under the mountains. There are older and fouler things than Orcs in the deep places of the world.’ He did not speak aloud his thought that whatever it was that dwelt in the lake, it had seized on Frodo first among all the Company.

While it's extremely likely that it was one creature, and the Kraken theory does fit, we cannot say for certain without a degree of speculation.

There is a clue to the Watcher in the Water's identity in The Silmarillion. In the chapter "Of Beren and Luthien" it is revealed that before the Gate of Angband "Black chasms opened beside the road, whence forms as of writhing serpents issued."

This suggests the tentacled monster described in The Fellowship of the Ring was a remnant of one of Morgoth's creations which had somehow survived the destruction of Beleriand at the end of the First Age. Perhaps the creature still retained some instinct to guard the gate of its master's abode, similar to the Balrog of Moria.

In addition to the suggestions in other posts, when Gandalf was recounting his fight with the Balrog to Aragorn, Legolas and Gimli, he says

[...] till at last he fled into dark tunnels. They were not made by Durin's folk [...]. Far, far below the deepest delvings of the Dwarves, the world is gnawed by nameless things. Even Sauron knows them not. They are older than he.

So it is possible that one of these "nameless things" found its way up to the lake.

i agree, it seems pretty likely the watcher is one of the nameless things just like ungoliant, whom had scary grabbing arms as well (ungoliant is just as scary as the watcher, but we just don't know anything about him)

22
Who controls the Watcher in the Water?
39
What are the evil things Gandalf encounters in his battle with the Balrog?
9
What did Hal see on the North Moors?

32
Was Isildur a Coward?
56
Why did Gandalf chase the Balrog down?
12
How could Orcs survive in subterranean settings?
8
Could the messenger sent by Sauron (to Erebor) be an Easterling?
16
What language was the inscription on the Doors of Durin written in?
24
Why didn't the Moria record-taker fight more and write less?
9
Could an Elf kill Sauron in single combat?
51
Where do the Dwarves put all the stone from the Mines of Moria?
14
Was Gandalf astray, or had the land changed, on the road to Moria?
47
What unit system does Middle-earth use?