Why does everyone on almost every planet in the Pegasus Galaxy speak English?

The issue of each planet speaking a unique language was sidestepped from the beginning of SG-1. The show-runners decided that they didn't want to have each episode include Daniel deciphering the language for the planet of the week. So to simplify things, they made everyone speak English. This carried over to Atlantis.

It seems most likely that there would be a common language among all of the people, or at least, a few languages. They are in constant trade with other worlds, so they would likely have a few languages. That language would most likely be Goa'uld among the Milky Way (And the movie would concur), and some variant of Ancient in Pegasus. At the very least, they should have people at each planet that would speak this common language.

But we do have to remember that this is a TV show about space travel and exploration, and not about linguistics. And while it'd appeal to a certain portion of the world to hear cool languages, it would make for more expensive, more difficult to follow story.

According to a recent entry in Joseph Mallozi's blog,

But, then again, I’m not exactly sure why all the aliens SG-1 encountered spoke English. Oh, right. It was the communication nanites that “infect” all gate travelers, allowing them to understood and be understood in any off-world language. Except goa’uld of course.

Well, it was probably meant mockingly, but then again - Babel fish

I dont think you will find a logical answer for this that fits within the story of the universe. Even if every single planet was populated with a started colony of people that spoke english, it would have been a dialect of english that was hundreds of years old. Also, what we consider english from a thousand years ago is pretty much a completely different language. There's a few words that are the same, or similar, but it's VERY different from what we speak today.

There's really no logical way all these planets would speak the english we speak today. Even when all these planets were colonized they were speaking english as we speak it now, the language would drift over time and each planet would have different dialects after hundreds or thousands of years.

So really the only reason everyone speaks english is based on practical considerations for the writers. They don't have to create a new language every time they go to a new planet. I'm guessing it's a lot easier for actors to memorize lines when those lines aren't in some made-up language. and i'm sure there's a significant percentage of people that wouldn't like having to read subtitles.

DHDs may be responsible.

The issue of understanding an alien language is partly addressed in the novel Sacrifice Moon, by Julie Fortune.

After being sent through a Stargate to an alien world, SG-1 find that they and the people they meet can all understand each other. Each group believing the other is speaking their language.

Based on the evidence available, Carter and Daniel believe that the DHD may be responsible:

"This is incredible," she said, "If he's speaking Greek but we hear it as English..."

"...then the Stargate must be translating for us."

"That doesn't make sense. It didn't work for us before."

"Yeah, but look, we used our Stargate to get to Chalcis - "

"-- and their Stargate to get here," Carter finished, enthusiasm bubling up.

"They had a DHD. We don't back home, we cobbled the system together by tiral and error. Maybe there's something in the DHDs that translates languages - "

" - yes! Software, some kind of part, I don't know, but something's doing this." Daniel was almost jittering with excitement. "Captain - Doctor - do you know what this means? We can -"

" - understand alien cutulres, even the ones with root languages that may not be familiar to us," Carter said.

The answer to this is that the movies are in fact dubbed into English, the movie producer determined that if the movie are shown in its original language they would be less popular as a lot of people wouldn't be able to understand the conversations, and since Sci-fi movies tend to be action-heavy, reading subtitles may detract attention from the actions.

This isn't unlike watching, say, WWII movies where the Germans speaks (dubbed) English.

Actually, in the episode moebius, SG-1 go back in time to 3000 B.C.E. and teach the humans serving Ra English. Therefore when they were transported elsewhere in the galaxy, they had already been in contact with English. The only two issues I have with this: The people from 3000 B.C.E. would have had to preserve the English language almost religiously to keep it perfect relative to modern English. This means that every individual since then would have to have been taught English as some sort of special universal language that was kept from naturally evolving. This is a stretch to accept, though theoretically just-barely-plausible. The 2nd issue is that the humans of the Pegasus Galaxy in SG: Atlantis also know English, and, presumably, they didn't come from the humans controlled by Ra in the Milky Way galaxy. So this does not cover Atlantis at all.

But SG-1 is plausible if you stretch your belief to accept that the people 5014 years ago preserved and spread English perfectly through their lineages.

Aliens in Stargate speak mostly English for two reasons: one, as previously stated, for convenience. Two, the Stargate TV series were produced in close collaboration with the US Air Force from the outset, and were explicitly intended to promote the Air Force and the US more generally--having American English as the lingua franca of the universe does that in a subtle but effective way.

In the canon comic book Stargate Universe: Back to Destiny #2, the Ancients are shown to understand English after listening to it for a remarkably brief period of time (but it is never explained how). 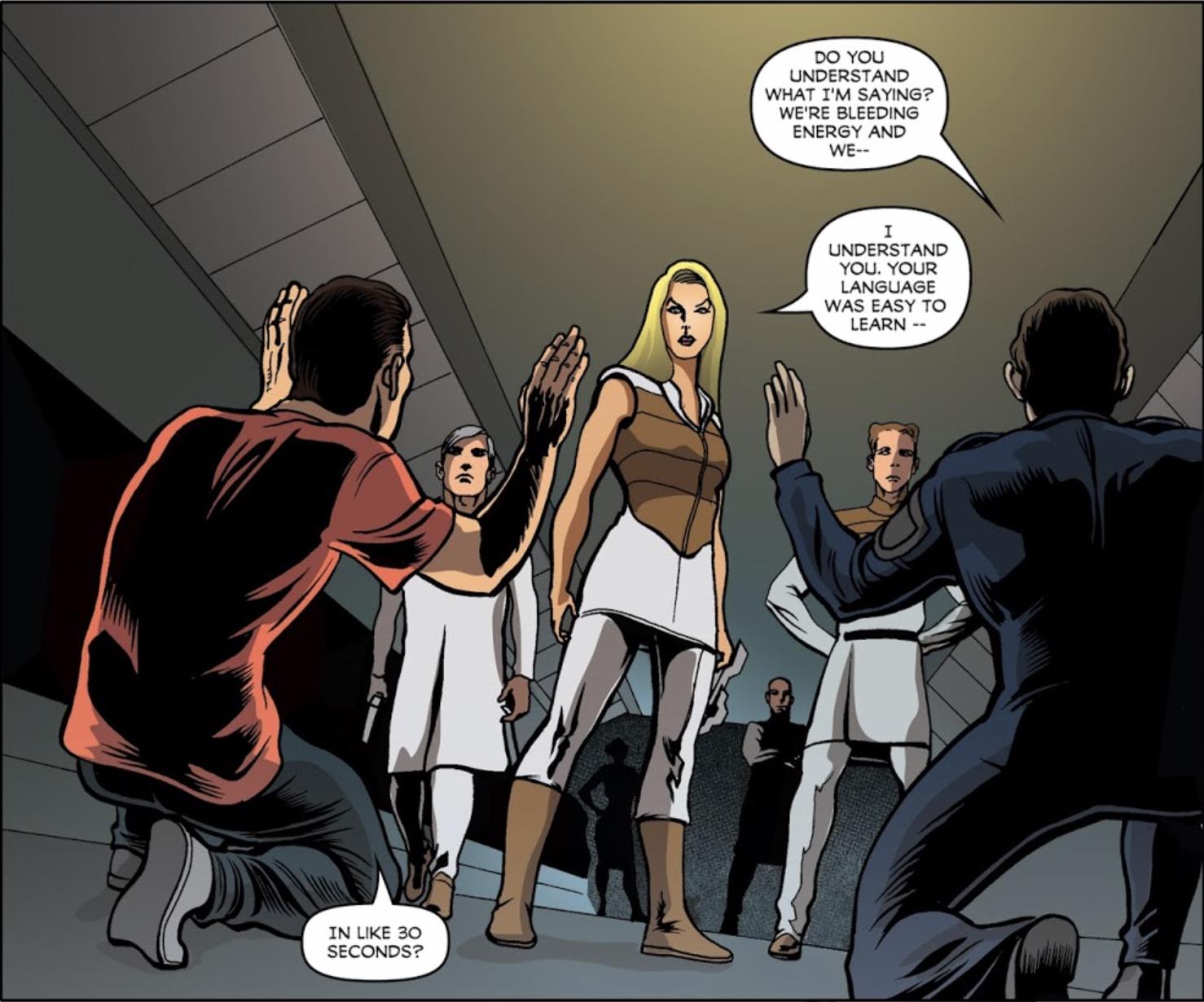 Young: Do you understand what I'm saying? We're bleeding energy and we--

Ancient: I understand you. Your language was easy to learn--

This is similar to the Nox in their eponymous episode, who were allies to the Ancients.

Nox Man: It took time to learn your speech.

Samantha Carter: Not much time.

Given that the Athosians, and the Wraith, are descended from the Ancients, it's possible that this ability was passed on, and they were able to pick up the language almost instantaneously after the humans from Earth came to Pegasus.

Out of universe: it's been brought up and deliberately avoided

This was addressed, and deliberately avoided, in a 2005 behind the scenes episode of Sci Fi Inside about Stargate: Atlantis.

David Hewlett (reading a fan letter): The Ancient hologram was speaking English, which I feel she wouldn't have. Also, why did they have the Athosians speaking English—the Ancients didn't speak any form of English at all in SG-1. Heck! They even have the Wraith speak English!

Wraith Queen (in clip): How did this come to you?

David Hewlett: Damn them! They noticed!

The fact that an official production has deliberately avoided the answer suggests that there is no answer and that it is a deliberate conceit of the show.

They don't. Each of us has to deal with that question ourselves. If the Americans couldn't communicate with the people of Abydos (in the movie), but could later (in the show), there are only two possibilities. ONE, there's something in the gate itself that conditions verbal communication when the gate is properly calibrated; or, TWO, since the writers are, in effect, God, then God has determined that the entire universe speaks 20th century English. But wait, the Russians had their own stargate program. Did they have to learn English to understand people eight hundred light years away? Makes no sense.

I propose number ONE. Seeing how rapidly language changes (consider Beowulf, which was written in the English spoken in 700 A.D.), it would only be exasperated in other worlds. Since the shows' developers never provided an answer, we must use the tools of logic. If anyone has a better idea, I'm completely open. Also, seeing that the Ancients developed an ascension device (which made intricate changes in a person's DNA) certainly building a language component into a transportation device that can disintegrate complex biological and technical forms, then send them light years away and subsequently reintegrate them, well, that should rate somewhat more favorably on the Occam's Razor Scale than the Q-Continuum making English the cosmic language of the Universe.

But alas, there are only two choices -- you decide!

I believe this was answered in the show at some point-the Ancients spread English to all the other planets. That’s at least what I always thought.

0
How do the different species understand each other?
15
Does the crew of the Destiny have a large enough population to found a colony?
-4
How did the Russian Stargate Program work?

14
What Was the Purpose of Different Point of Origin Symbols?
6
How did the first off-world team know the return address for Atlantis?
5
Are all the Humans in the (Stargate) Milky Galaxy the same species?
12
When did it become common knowledge that the Atlantis Expedition were from another galaxy?
7
How long did it take to get to the Midway Station?
6
How did Ganos Lal avoid the effects of the Sangraal?
16
Why didn't the Ori invade Pegasus as well as the Milky Way?
16
Why are there so few ancient ships in the Milky Way?
42
Why did the writers never let the Stargate be revealed to the public?
28
How did the Goa'uld become spacefaring?