Just today I was watching Terminator 2 Judgement Day and I remembered a question that I had never asked on here: why does the T-1000 use a rod to pierce through the T-800's power cell instead of just forming sharp objects to jab at the T-800? In many of the scenes including the end, you see the T-1000 come within close range of the T-800. but he just merely fights hand to hand. What would happen and what would be disadvantageous, if the T-1000, used his knife like projections to beat down the T-800?

The question above is asked with understanding that certain events in the movie take place on James Cameron's call; however, would it be any different if the T-1000 battled in this way?

This is basic mechanics, and the same reason why humans use clubs.

When you swing a rod, it hits harder due to added momentum (greater mass AND greater speed due to larger swing radius).

When you pierce with a rod, it STAYS in the chassis of T-800, whereas the sharp appendage formed by T-1000 would need to be withdrawn.

It stands to reason that there are many potential mechanical attacks within the T-800's torso that would disable it. Electronics to damage, cables/busses to separate, servos and hydraulics to puncture and destroy.

The one attack that he probably didn't want to consider was damaging the power cell, supposing T3 is canon... it could blow him up without necessarily killing John Connor.

So what we're seeing here is the T-1000 using the (rebar, I think?) rod to wedge in and cause any of the other sorts of damage I hinted at, hoping to disable it completely. Most likely, its own stabbing appendages/implements had some limit past which they would bend or shatter. Now while those aren't an issue with human flesh, if it did this with the T-800, its knives might just snap off and the nanobots along the fracture might be permanently disabled. Arnie though has a titanium alloy chasis. Rebar works really well, with none of the downsides.

When the Connors escape from the Skynet lab and the end of the T1000's weapon arm is shot off it makes a distinct 'tinkling' sound when it lands on the road. Brittle metals tend to make higher pitched noises than ductile metals when struck so we can deduce that when formed into weapons the T1000's 'flesh' is brittle in comparison to steel.

A brittle metal is more likely to snap if used as a lever, thus the T1000 was simply using the best available tool to hand.

It also looks cool which is a factor we most never forget when analysing movies.

A T-1000 is incapable of piercing a T-800's chassis or it would. Being pointy and hexagonal as well as judging by the sound it makes when he throws it on the floor, that's a hardened-steel crow bar. I can't think of a better melee weapon for either terminator.

The T-1000 is not capable of producing weapons anywhere near this hard. As we see the mimetic poly-alloy degrade throughout the movie due to numerous woes, stabbing through hard stuff probably 'hurts' too. Speculatively, every step it takes causes damage. It seldom extends itself quickly or runs, otherwise slowly transforming itself to limit damage and conserve energy. This may also explain why it doesn't just become a blob or something to get him. "It doesn't work that way" very well.

From looking at the consistency of the alloy in this picture, it would be like hitting a rock with a lead hammer. 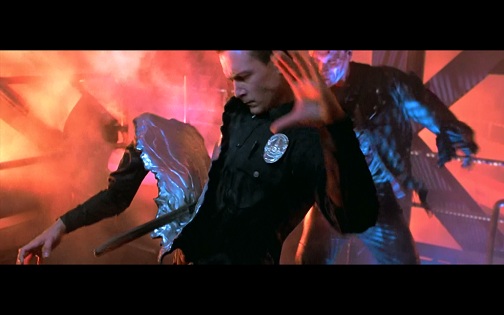 25
How does the T-1000 see?
36
What does a Terminator do after its mission is accomplished?
10
How much of the 'liquid metal' would you have to take away from the T-1000 to destroy the terminator?
15
How did the police learn that John Connor's foster parents had been killed?
9
Can a Terminator feel affection?
3
Why didn't the T-1000 wait for John Connor at his foster parents' house?
3
How did John Henry take Cameron’s chip to the future?
33
Why would future John risk sending back a T-800 to save his younger self?
24
Why does the T-1000 kill the trucker?