Is there a summary/map somewhere of the geo-political breakdown of the world in Heinlein's Friday?

I'm reading Robert Heinlein's Friday and having a little bit of trouble keeping all the geo-political breakdowns clear in my head, especially the North American ones. Is there a list or a map somewhere?

The geo-political lines in Friday are based on modern day lines with some expansion and adjustment. Some of those adjustments are carried over from other books and short stories, as Heinlein wrote Friday as a stand-alone, but is obviously informed on his views about nuclear war. Friday herself only moves through a small number of countries, but from the info in the book we can extrapolate a large amount of data about the world that she inhabits.

Places that are Destroyed

I would also assume that the major cities of the eastern seaboard of the U.S. and Canada are all but destroyed, as Friday never mentions them as a viable route, although this is never explicitly explored. The farthest east ever mentioned is Alabama. He does mention that there are now 400+ nations in the U.N. That means that the number of nations had more than doubled from current counts. It stands to reason that the eastern U.S. has to contain at least a few "nations", but they are probably considered backwaters with little to no influence.

Places that are Explored (in the book)

Canada has been split into at least two nations, British Canada and Quebec. Since BC has its capital in Vancouver and spread east, it probably stops some where in present day Ontario. Quebec probably subsumed the province of Ontario's cities and whatever remains east of the present day province. Both governments appear to resemble their modern day counter parts.

Alaska has become it's own country called the Alaska Free State. Government unknown, although based on name and the fact that Friday felt it was a good choice for untraceable travel, I would say it is at least permissive.

The California Confederacy has subsumed all the territory north to the Canadian border. It has also expanded south and east until it borders the Republic of Texas. It also has consumed some amount of the territory of Colorado, Wyoming and Idaho, since it shares a border with the Chicago Imperium. Government is a form of direct democracy, in which everyone has a vote and it is impossible to be disenfranchised.

Las Vegas has become Vegas Free State. It's not part of the California Confederacy, although all the land around it may be, depending on how California expanded around it. Government unknown.

The Chicago Imperium controls the heartland of the present USA. It controls south as far as Vicksburg, MS and north up to the borders of British Canada and Quebec. It controls west to the borders of California, and an unknown amount east. We do know that it's northern border is 2500 km (1553.43 mi), which would show it west as far as Idaho or the middle of Montana, depending on where the border between Quebec and British Canada is. The CI is normal base of operations for System Enterprises, the group that Friday works for. Government is tyrant-based, with some unknown manner of passing power.

The Republic of Texas has carved out a large amount of territory along the bottom of the present US. It extends west to the California Confederacy and east to at least the Mississippi river. Government unknown, although it appears democratically based.

New Zealand appears untouched by the dramatic political changes, as it has the same name and controls the same land that it does in the modern world. Government is assumed to be the same as well. Australia seems similarly untouched.

The Rest of the World

There is a list of Shipstone companies in the book that would highlight what other nations are important in Friday's world. That said, none of the strictly territorial nations hold anything like their former power. The power has shifted to corporations. Many other nations are mentioned, but are not important or unnecessary to understand the plot of the book. 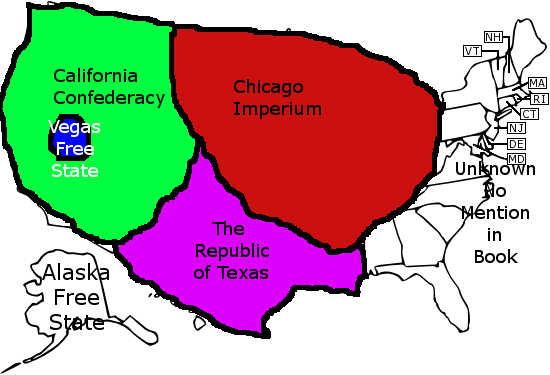 Not the answer you're looking for? Browse other questions tagged robert-a-heinlein politics friday or ask your own question.