Where Did Dolores Umbridge Get Her Evil Quill?

Where did Dolores Umbridge get her evil quill?

I would doubt she bought her evil quill at Scrivenshaft's Quill Shop in Hogsmeade (If Scrivenshaft's were in Knockturn Alley I'd have a different opinion.). Would this kind of item be issued by the Ministry of Magic? Or did she buy it on the black market?

Umbridge is known to buy items from peddlers on the streets (In the case of Mundungus Fletcher, she actually stole the Slytherin locket Horcrux by threatening Dung with arrest for not having a proper sellers license.).

A quill like that seems like an ... odd ... thing to just keep on hand, so she clearly went out of her way to procure it, I'm guessing especially for Hogwarts. So, Knockturn Alley? A Dark Arts dealer? The Ministry of Magic? A design of her own making? Is there any canon information on where Umbridge got her I must not tell lies quill? I went through Harry Potter and the Order of the Phoenix and didn't find anything, but there are six other books.

‘Now, you are going to be doing some lines for me, Mr Potter. No, not with your quill,’ she added, as Harry bent down to open his bag. ‘You’re going to be using a rather special one of mine. Here you are.’

She handed him a long, thin black quill with an unusually sharp point.

‘I want you to write, I must not tell lies,’ she told him softly.

Order of the Phoenix - page 240 - Bloomsbury - chapter 13, Detention With Dolores

UPDATE: November 2014 -- J.K. Rowling revealed on Pottermore that Umbridge indeed created her infamous evil quill all on her own, so all three answers below are canonically correct! 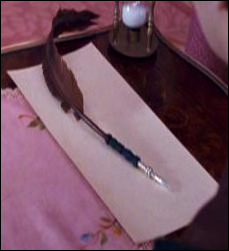 She made it herself.

Her Pottermore entry states this explicitly:

Special abilities: Her punishment quill is of her own invention

What’s even more disturbing is the fact that it doesn’t sound unique. It sounds like she has a number of similar items in her arsenal:

Combine this with the fact that “Nasty things tended to happen to people” who Umbridge didn’t like, and that “there is little to choose between her and Bellatrix Lestrange”, I’m inclined to think this is almost certainly dark magic that she learnt herself. Her Pottermore entry dances around this fact, and doesn’t say it explicitly, but I think she was definitely using illegal magic like this.

‘You’re going to be using a rather special one of mine. Here you are.’

I see no evidence to suggest she bought it, nor that she would necessarily want to be seen buying such an item, when clearly flourish and blots is a better place for quill purchasement.

The only conclusion I find then is that Umbridge an old hag a senior witch, most likely crafted the item herself.

In a biography of Umbridge written by JK Rowling herself, which can be found on Pottermore, it states that Umbridge created the blood quill herself. You can read this article on today.com. Link: http://t.today.com/books/j-k-rowling-writes-harry-potter-halloween-tale-profiling-malicious-1D80248516

Not the answer you're looking for? Browse other questions tagged harry-potter magic magical-items dark-arts or ask your own question.

5
Where did Umbridge get a new wand?

24
When did Umbridge acquire the locket of Slytherin?
3
Was Mundungus Fletcher a Full Member of the Order?
28
What was Dolores Umbridge's blood status?
6
A deliberate hook by the author for future reference?
19
Did Umbridge hold prejudices towards muggle-borns before the fall of the Ministry?
27
How do the headmasters of Hogwarts get appointed?
78
Why was Dolores Umbridge not arrested after the end of Harry's fifth year?
31
Why did Umbridge collaborate with Voldemort?
32
Did Snape really give Umbridge a fake Veritaserum potion that Harry later pretended to drink?
4
Where was Rufus Scrimgeour before Harry Potter and the Half Blood Prince, and what was he doing?