How did Chuck Berry come up with Johnny B. Goode in the original timeline?

In Back To The Future II, we learn that traveling forward in time, after having altered the past, lands the traveler into an alternate present or future compared to the one they originally left. 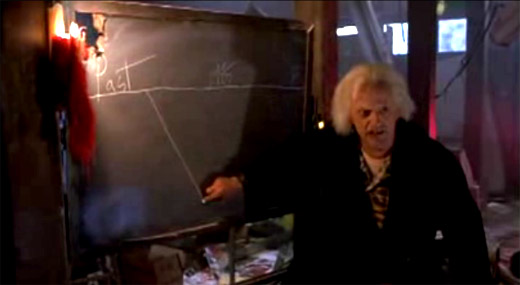 (Thanks to @Xantec for the image)

However, in Back to the Future I, it is clearly implied that Marty's performance of Johnny B. Goode at the Enchantment Under The Sea dance was the inspiration for Chuck Berry's composition of the song.

If, in the altered past, Marty is the inspiration for Johnny B. Goode, then how did Chuck Berry come up with it in the original timeline? Could this be a paradox?

Actually, you are very wrong when you say:

"it is clearly implied that Marty's performance of Johnny B. Goode at the Enchantment Under The Sea dance was the inspiration for Chuck Berry's composition of the song."

If you watch the movie carefully, most of the actual Johnny B. Goode song is performed BEFORE the phone call, so what Chuck Berry gets to hear over the phone is the godawful metal shred that would forever live in infamy.

Evidence: Watch ~1:30mins into this clip

So, in the original timeline, Chuck Berry invented the song. Marty heard it later.

Chuck Berry hears Marty performing the song over the phone (in 1955). In a way this means he 'stole' the song :) - but he indirectly stole it from himself.

That Chuck Berry is the one who wrote the song. He had to have.

I wouldn't say it is exactly a time paradox.

Presumably Chuck Berry is an accomplished musician and songwriter in either timeline. What prevents him from spontaneously composing it?

You're overthinking this way too much. There's no evidence, not even circumstantial, that he's incapable of doing it on his own.

-3
What kind of paradox is this?
15
Back To The Future: Time Travel Paradox

63
Why was Marty present in his jump to 2015 in Back to the Future 2?
16
What was George McFly's and Biff's jobs in the original timeline?
23
If Marty had faded out, would that have destroyed the universe?
29
Why did Biff not pursue a relationship with Lorraine in the original timeline?
8
Did Michael J. Fox write his own music for BttF?
2
Does Back To The Future ever directly (visually) contradict itself?