Did Draco Malfoy Have the Dark Mark?

Draco Malfoy would have become a Death Eater shortly after he turned 16 years old, after the events of Order of the Phoenix. Here is what J.K. Rowling says about Draco being a Death Eater:

J.K. Rowling: Draco did a lot of growing up in [Half-Blood Prince]. I had an interesting discussion, I thought, with my editor Emma, about Draco. She said to me, "So, Malfoy can do Occlumency," which obviously Harry never mastered and has now pretty much given up on doing, or attempting. And she was querying this and wondering whether he should be as good as it, but I think Draco would be very gifted in Occlumency, unlike Harry. [...] But I thought of Draco as someone who is very capable of compartmentalizing his life and his emotions, and always has done. So he's shut down his pity, enabling him to bully effectively. He's shut down compassion - how else would you become a Death Eater? So he suppresses virtually all of the good side of himself. But then he's playing with the big boys, as the phrase has it, and suddenly, having talked the talk he's asked to walk it for the first time and it is absolutely terrifying.

The werewolf might be allowed to wear Death Eater robes when they wanted to use him, but only Voldemort’s inner circle were branded with the Dark Mark: Greyback had not been granted this highest honour.

‘Draco should be proud,’ said Bellatrix indifferently. ‘The Dark Lord is granting him a great honour. And I will say this for Draco: he isn’t shrinking away from his duty, he seems glad of a chance to prove himself, excited at the prospect –’

Narcissa began to cry in earnest, gazing beseechingly all the while at Snape.

‘That’s because he is sixteen and has no idea what lies in store! Why, Severus? Why my son? It is too dangerous! This is vengeance for Lucius’s mistake, I know it!’ 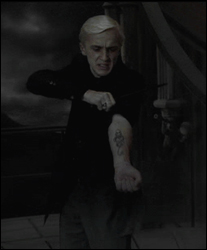 In the movie Harry Potter and the Half-Blood Prince, which is presumably reviewed by J.K. Rowling, Draco reveals he does have the Dark Mark to Dumbledore; however, is this really feasible and accurate in a canon context?

An answer based in canon would be ideal!

At the end of the Half-Blood Prince, when Harry and Dumbledore are alone with Draco, several other Death Eaters enter the room. Later, when Lupin and the others are discussing what happened, they say something like "We were thrown against the barrier, but Snape ran through it as if it wasn't there. You must have needed a Dark Mark to get through it."

I'm not sure when the barrier was put up, so I can't say that Malfoy got through it with his Dark Mark. However, he and Snape do make a run for it at the end, and presumably make it through the barrier easily, implying that they both have the Dark Mark.

It's not explicitly stated, but Draco's reaction (in HP and the Cursed Child) to being asked what those with the Dark Mark are feeling is especially telling.

HARRY: Now this is difficult but we have to ask it to rule it out. Those of you with a Dark Mark . . . have you felt anything? Even a twinge?

DRACO: Back to being prejudiced against those with a Dark Mark, are we, Potter?

HERMIONE: No, Draco. Harry is simply trying to —

Acording to the latest Pottermore update (12/2014), yes, he became a full fledged Death Eater - which carries with it a Dark Mark:

Furious at the world that seemed suddenly to have turned on his father, Draco accepted full membership of the Death Eaters and agreed to perform the murder Voldemort ordered.

I've always assumed, yes, he does. As someone mentioned before about the scene in Borgin and Burkes and Malfoy wincing in Madam Malkin's, there are subtle tells that elude to it. When you go back and actually think, what could have actually frightened Borgin into taking him seriously? As to the part about Snape and Malfoy escaping... the barrier was put up after Draco was at the top of the tower and destroyed before they ran down the steps. No question to that.

The book only makes sense in the context of Malfoy actually having the mark even though it never is confirmed. I think J.K. wanted to leave it open ended because if she flat out came and said he was branded, you kind of lose any last bit of sympathy you may have with the character and his struggle. I believe she left it so you could sympathize with Malfoy and his difficult predicament, if she didn't do it that way... most would probably just write Draco off as plain evil at that point and never give him a second thought about his true nature, i.e. trying to protect his family.

So all in all, I'd say, yes he definitely had the mark. It just doesn't make much sense the other way around.

I've always assumed he did have the Mark not only because of the subtle tells mentioned above but because giving him that mark was like the ultimate punishment for his father. Think about it; he's branded for life, they'll never forget their entire relationship with Voldemort and as mentioned above, Narcissa is convinced that Draco was chosen as punishment for Lucius's mistake. Plus, just because he has received the Death Mark doesn't mean he wanted to be for the enjoyment of being a Death Eater. Perhaps he only wanted to be b/c he knew he needed to for his family's sake. The repressed good in him is still there, he's just a boy who had to make sacrifices.

This was an inconsistency in the film. Right before Draco confronts Dumbledore, he leaves the hospital wing after nearly bleeding to death. Don’t you think someone would have noticed the dark mark while making sure all of his wounds were mended? On top of that, let us consider the fact that Draco was living in a dormitory. Students living in a dormitory don't really have that much privacy: i.e. changing cloths, bathing, etc. Imagine trying to go a year in such conditions without anyone noticing your forearm.

RhienwaldRhienwald
1
4
Add a comment  |
Highly active question. Earn 10 reputation (not counting the association bonus) in order to answer this question. The reputation requirement helps protect this question from spam and non-answer activity.

Not the answer you're looking for? Browse other questions tagged harry-potter death-eaters draco-malfoy or ask your own question.

12
What Happened to the Malfoys after the Second Wizarding War?