I am trying to find a short story that I read in my youth. I unfortunately can't remember anything of the title. I thought it had been written by Arthur C. Clarke, but a search of his short stories turns up nothing for me so far.

At least the first part of the story involves one or more conversations between two aliens of the same species, who had been childhood friends but then grew apart. One went off to become involved in a military struggle against other aliens on the same planet, who I believe were the same or a related species. I believe the aliens were quadrupeds, or perhaps a centaur type creature or a unicorn. One of the creatures may have had a broken horn. I believe they had long bodies.

The friend who had gone to aid the military effort was describing telepathy as a weapon to his initially incredulous friend, I believe. That friend then remembered at one point when he and the military one had played together as children, pretending that the other had taken control of their bodies, and how he had sometimes really felt powerless.

I'm sorry, I know this is not a lot to go on, but it would help me tremendously to find this story. Thanks for reading and any help you can give me.

The story is "Second Dawn" by Arthur C. Clarke, originally published in Science Fiction Quarterly in 1951

A full copy of the text can be found here 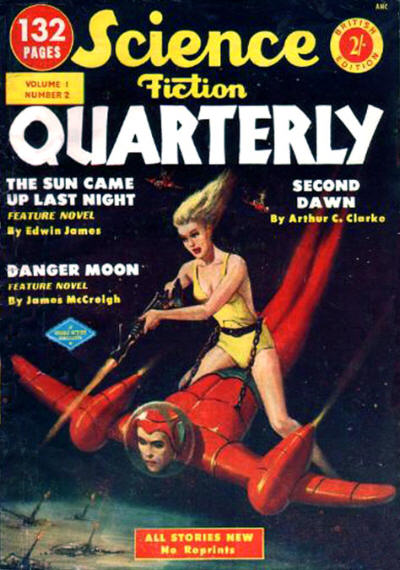 19
Movie or TV film - full story happen on a military starship,
16
Sci-fi series: humans are immune to telepathy, become soldiers for an alien group fighting against invertebrate telepaths
10
Title of 2 books about 2 different alien species who are fighting for earth
7
Identify short story with group telepathy with an interstellar consciousness
7
Short Science Fiction story similar to "Story of Your Life"
6
Short story about a fantasy creature zoo with a centaur man
11
Short story about shark-like alien species that eats other sentient aliens
11
Short story where a translation box is used to avert a war between two alien species