Why do they still refer to the "Seven Kingdoms" in Game of Thrones?

As I understand it, the "Seven Kingdoms" refer to the kingdoms before Aegon's Conquest. Aren't there more kingdoms around the time that the first book is set? (For example, the Iron Islands and Riverlands are now two kingdoms, right?)

So why does everyone refer to there being seven?

For example, Robert says to Ned:

"In the South, the way they talk about my Seven Kingdoms, a man forgets that your part is as big as the other six combined."

After the Conquest there were no more kingdoms (plural), just one single kingdom under the Iron Throne founded by the Targaryens and now ruled by the Baratheons. But the story of the Targaryens conquering the Seven Kingdoms of old is now an intrinsic part of the lore of the land, and the stuff of legend. So when people refer to the Seven Kingdoms, they really mean the lands that were once ruled as seven separate kingdoms before the rise of Aegon I. You can say it's a romantic way to refer to Westeros.

A real life analogue would be the UK, which is more officially known as The United Kingdom of Great Britain and Northern Ireland. There's only one kingdom, but it was once many kingdoms that united into one.

The titles which Aegon created for himself and all other Kings inherited after him were:

King of the Andals and the Rhoynar and the First Men, Lord of the Seven Kingdoms, Protector of the Realm

This title remained the same even 300 years after Aegon's death despite the fact that in Post-invasion era, there were no longer 7 Kingdoms or administrative Units. This is the title which causes all the confusion because many people do not realize that When Aegon came, there actually were seven Kingdoms which is no longer the case today or necessarily before Aegon's times.

The De-jure Kingdoms of Westeros which are based on distinct cultures and religions (And in some cases ethnicities) are:

That gives us a sum of 8 De-jure Kingdoms.

When Aegon came however, Westeros was not divided along de-jure lines. Kingdoms were continuously at wars against each other with all of them occupying de-jure regions of some other Kingdom.

Many centuries before the conquest, House Justman ruled Riverlands with splendor. Last of their line Bernarr II Justman was killed by King Qhored Hoare of Iron Islands. Riverlands fell into chaos with every House claiming the throne for themselves. The Chaos Ended when King Torrence Teague claimed the throne. Riverlords did not like House Teague and rose in rebellions many time.

Finally during one uprising, The traitorous Tullys, Vances and Blackwoods under leadership Roderick Blackwood invited King Arlan III Durrandon of Stormlands to attack their own liege King Humfrey Teague. House Teague was wiped out in Battle of Six Kings and King Arlan merged Riverlands into Stormlands.

Years passed until Harwyn 'Hardhand' Hoare took throne of Iron Islands. The ambitious King kicked Stormkings out of Riverlands and became King of Isles and Rivers. Rule of House Hoare over Riverlands continued until Aegon came to conquer Westeros.

So at time of Aegon's conquest, Riverlands was not a royal political entity but rather subjects to Kingdom of Iron Islands. De-Facto Kingdoms at that time were the following (With their current status in parenthesis):

A Pre-conquest map of Westeros from Crusader Kings II: A Game of Thrones Mod (Which I can verify is correct except the fact that technically Dorne should be referred to as a principality as Rhoynar culture has Princes, not Kings even though they are equivalents of Kings for all intents and purposes, and that It should be Kingdom of Isles and Rivers instead of Kingdom of Iron Islands): 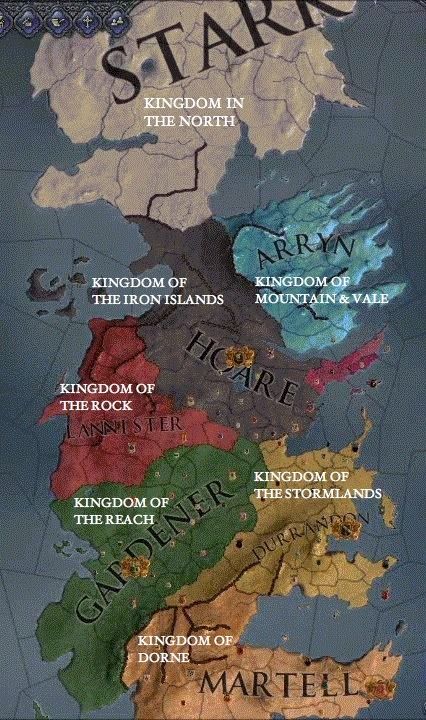 Aegon the Conqueror usually retained the political hegemony of Kingdoms which submitted to his rule.

The Notable exception was however Kingdom of Isles and Rivers because they refused to submit and chose to fight till the bitter end. Riverlords under Lord Tully rallied to Aegon's cause against King Harren the Black. Harren the Black refused to submit to Aegon's rule and chose to fight. After House Hoare was extinguished in Burning of Harrenhal, Aegon raised Lord Edmyn Tully to office of Lord Paramount of Riverlands due to Edmyn Tully's service in cause of Targaryens especially in the initial days of the conquest when Targaryen position was uncertain.

The other Part of Harren's Kingdom, The Iron Islands fell into chaos. Many pretenders to House Hoare's inheritance rose and fought against each other. King Aegon invaded Iron Islands two years after completion of his invasion of mainland Westeros (With Exception of Dorne). Aegon defeated all the pretenders but allowed them to choose their own Liege Lord which was unique as all other Lords Paramount were appointed by Aegon I and Ironborn were the only people who were allowed to choose their own Leaders. Defeated Ironborn chose Lord Vickon Greyjoy. Aegon named Vickon as Lord of Iron Islands and left for King's Landing. Greyjoys were now Lord Paramounts of Iron Islands and answerable to no one except the King himself.

Other than that Aegon also took the disputed regions of Blackwater Rush and Bay as royal lands because there was no clear owner of those Lands and Aegon needed a foothold on main continent to stabilize his rule. This region was named Crownlands.

So in Aegon's time there were following administrative units with their own governing ruler:

Later Dorne also came under Iron Throne during reign of King Daeron II (And briefly in reign of King Daeron I). According to the agreement, Dornish retained several special rights which included the right to address their rulers as Prince/Princess instead of Lords. So the new Administrative units were:

A map of post-Robert's Rebellion Westeros which has the same administrative units as constituted by Aegon the Conqueror.

I quote from the recently published The World of Ice & Fire: The Untold History of Westeros and the Game of Thrones (A Song of Ice and Fire) by George R.R. Martin, Elio Garcia and Linda Antonsson:

For centuries it has been the custom to speak of the Seven Kingdoms of Westeros. This familiar usage derives from the seven great kingdoms that held sway over most of Westeros below the Wall during years immediately preceding Aegon’s Conquest. Yet even then, the term was far from exact, for one of those “kingdoms” was ruled by a princess rather than a king (Dorne), and Aegon Targaryen’s own “kingdom” of Dragonstone was never included in the count. Nonetheless, the term endures. Just as we speak of the Hundred Kingdoms of yore, though there was never a time when Westeros was actually divided into a hundred independent states, we must bow to common usage and talk of the Seven Kingdoms, despite the imprecision.

When Aegon I came to power there were 7 kingdoms (1-North 2-Vale and Mountain 3-Iron Islands and Riverlands 4-Rock 5-Stormlands 6-Reach 7-Dorne) of which Aegon conquered SIX as he failed to take Dorne ("Unbowed, Unbent, Unbroken").

The six kingdoms he took conquered were divided into 8 sections, 7 of which had their own ruling family.

Dorne came into the picture much more recently making a grand total of 9 kingdoms under the rule of the iron throne (plus that wonderful tenth one on the other side of the wall).

I'd say it has most of its roots in the religion of the Andals, however, with their seven gods in one.

The seven kingdoms before Aegon’s conquest are:

Note the Targeryens and Baratheons did not have any kingdoms. The Targaryens came from ancient Valyria and then moved to Dragonstone before the conquest. The Baratheons are a bloodline of Targaryens whose ancestor was a bastard but were legitimised as a house when the bastard Targaryen was legitimised by his true born brother after the true born brother became king. Because they had no kingdom of their own was the main reason why Aegon set out on his conquest with Visenya and Rhaenys.

By bestowing the Wardens of the North, South, West and East, House Targaryen gave houses Arryn, Stark, Lannister and Tyrell dominion in his stead and any revolts against these houses would have been seen as rebellion against Aegon. This is why the Tyrells were able to rule peacefully in Highgarden even though they were only stewards to the Garderners (original lords), and despite the presence of other true born royal houses like the Oakhearts, and the Florents.

25
Why did Aegon Targaryen give up attempting to conquer Dorne?
17
Under which kingdom are the Iron Islands?
14
Why is Daenerys willing to let Iron Islanders secede but not the Northmen?
13
What are the different provinces mentioned in a Game of Thrones?

24
In Game of Thrones, which were the "Seven Kingdoms" of Westeros?
31
What is the bank system in Game of Thrones and why is it legitimate to exist?
37
Who supported the Targaryens during Robert's Rebellion?
22
How did Ned see Cersei more recently than Robert?
17
Under which kingdom are the Iron Islands?
25
Where do the regions of Westeros appear to align as of the season 6 finale?
14
Why is Daenerys willing to let Iron Islanders secede but not the Northmen?
4
Why does the Seven Kingdoms have a royal navy?
6
What happens to the property of Westerosi Houses if they're wiped out?