the plot as best I can remember: Middle aged woman (spy?) was set adrift/banished from earth in a space ship. Saved by near-human aliens she ends up undergoing a special surgery/process to take the place of a teenager (princess?). She is captured by a group that conditions young women to be sex slaves and a side effect of not being exactly the same species is that her older mature competent mind is not in complete control of the young body she inhabits. This makes it difficult for her to escape. It was surprisingly adult content for a 1984 high-school book club book.

This description matches very well with what I remember of Mind Guest by Sharon Green. Book 1 of the "Diana Santee, Spaceways Agent" series. First published by DAW Books in 1984, which agrees with your recollection of running across it during that same year. (If it was part of a high-school book club offering, I can only assume that someone selected it from a list of DAW's latest offerings without ever reading it, and simply had no idea of what was actually happening to the narrator within the pages.) Here's a scan of the cover of the original paperback edition. 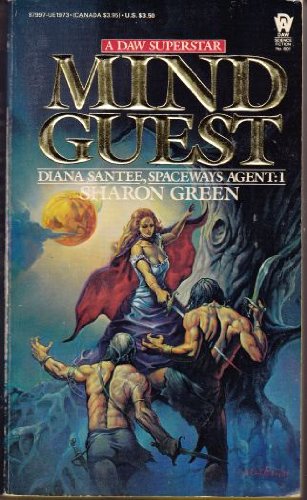 I tried to read a used paperback copy once, back around the turn of the century. I thought it started out fairly well, but then it went downhill and I started skimming ahead just so I could know how it finally ended. (Afterwards, I never bothered to try my luck with any later volumes in the same series.) As you say, there were two sets of memories uneasily coexisting inside the same body: the narrator's original personality, a highly trained, well-experienced, supposedly tough-as-nails futuristic secret agent (a sort of female James Bond) -- and a copy of the memories and personality of the spoiled-brat princess whom she was impersonating. Here's what the official summary on Amazon says about the plot -- but, as I recall, this is just summarizing the first chapter or so of the novel:

Diana finds herself on a disabled space ship, where she'd been put while unconscious by the slaver she'd been after. The man wanted to be able to say she was alive and well the last time he saw her, and as far as he knows she's still the same.

Diana has nothing but death to look forward to, having been headed out of the area of space of her Federation. Instead of waiting, though, she tries to repair the damage done to the ship. Instead of the effort working, though, she makes things worse. Just as the end is coming she's rescued, but not by her own people...

And here's an Amazon reviewer's very critical one-paragraph summary of the entire plot, which matches up quite well with what I thought I remembered from many years ago (and didn't like):

It isn't a perfect match, but it does sound like one of Chalker's "Dancing Gods" series. He does a lot of things where peoples bodies and minds are changed at the whim of heartless power mongers.

6
80s teen novel about an alien virus on a space ship?