Why didn't the dwarf women have beards in "The Hobbit: An Unexpected Journey?"

I may have missed it with the 3D, but I could have sworn I saw what I suspect was a lady Dwarf or two running from the Erebor in the beginning of The Hobbit, but they didn't seem bearded.

If dwarf women aren't bearded, then was Aragorn just kidding in The Two Towers (movie) when he intimated that they all had beards?

It's also stated by Tolkien in appendix A to The Lord of the Rings that female dwarves appear identical to males and we can assume they are also born with beards, just like their male counterparts.

If they looked like women, human or otherwise, they weren't Dwarf women.

From the movie; Gimli to Éowyn on the way to Helms Deep:

Gimli: It's true you don't see many Dwarf women. And in fact, they are so alike in voice and appearance, that they are often mistaken for Dwarf men.

Aragorn: It's the beards.

Gimli: And this in turn has given rise to the belief that there are no dwarf women, and that Dwarves just spring out of holes in the ground! Which is, of course, ridiculous.

Did Dwarf women have beards?

From: The Tolkien FAQ by William D.B. Loos

It seems they did. In the note on Dwarf women in Appendix A it was told:

It was said by Gimli that there are few dwarf-women, probably no more than a third of the whole people. They seldom walk abroad except at great need. They are in voice and appearance, and in garb if they must go on a journey, so like to the dwarf-men that the eyes and ears of other peoples cannot tell them apart. The Return of the King, 360 (App A)]

Since beards were part of the appearance, not the garb, of dwarf-men, we must conclude that dwarf-women did in fact have beards.

The question has been raised as to whether all dwarf men necessarily had beards (the above conclusion depends upon this premise). Insofar as the matter was mentioned at all, it was shown through either direct statements or casual references that at least Thorin, Dwalin, Balin, Fili, Kili, Gloin, Bombur, and Gimli all definitely had beards The Hobbit, 20-22, 159, 186, 198; The Fellowship of the Ring, 240; The Return of the King, 148); it is natural to assume that the others did as well. While no definite statement about the beard status of dwarf-men in general was ever presented as a matter of lore, a thought which reflects the assumed view was given to Bilbo early in the The Hobbit: [as Bilbo rode along wearing Dwalin's hood]

"His only comfort was that he couldn't be mistaken for a dwarf, as he had no beard." (The Hobbit, 42)

In any event, the notion of bearded dwarves seems an assumption with fairly firm foundations.

The movie is not expected to be seen only by LOTR fans and former readers. Probably there are thousands (if not millions) of possible spectators that won't have even known that female dwarves had beards, even after Aragorn's joke in "The Two Towers".

This means that representing bearded female dwarves in the movie would probably make them pass undetected by many viewers, and would surely create uncomfortable questions for many others.

It is more than probable that the use of a "more traditional female aspect" on dwarven females was a production mandate to fulfill the political correctness that's expected from a family movie. And I'm quite convinced of it after seeing that not all dwarves in the movie had "dwarven facial traits". You can see several dwarves with heavy facial dwarven identity, while others (Thorin and Fili, for example) are far more human (of a bearded class).

The marketing of a movie forces directors often to concede on (not always) minor aspects to keep producers (aka money) happy. Handsome dwarves and human-like female dwarves are probably one of many minor aspects to which Peter Jackson had to adjust.

I presume that we'll see bearded female dwarves in the future extended versions of the movies (maybe interpreted by Peter's daughter? :D)

If you google image dwarf women and hobbit, there are concept pictures purportedly from Weta Workshop that show women with light beards and extended sideburns—but definite facial hair. For all intents and purposes, these were probably the beards that Aragorn was referring to—they just weren't full mutton chop / lumberjack beards that we are familiar with...

Not exactly discreet, so yes, they did have beards... 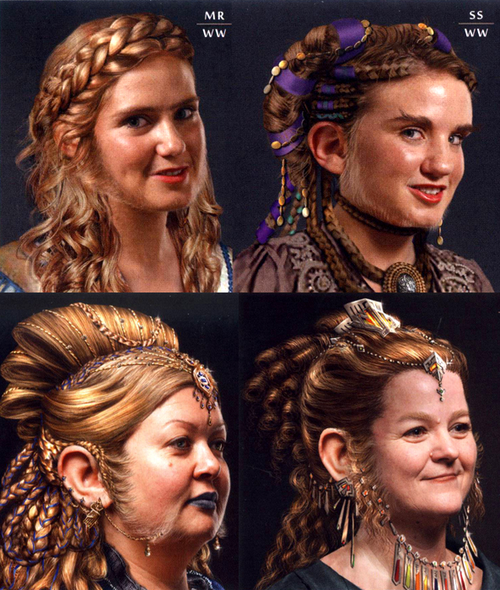 The female dwarf in the section where Smaug attacked the Dale had fluffy sideburns. I thought it was a compromise.

I recall watching an interview with Richard Armitage in which they mentioned the lack of Female Dwarves during the scene when Bilbo was writing about Erebor. He said that female Dwarves had beards so they might have just missed them.

So, according to him there were female Dwarves there and they had beards. Possibly the ones seen fleeing Erebor were still quite young and hadn't grown into their beards yet.

As with most IRL ethnicities, not only are people often considered "indistinguishable" by outgroups (as in "all chinese look alike" or "all blacks look alike" —often uttered by people with few or no friends of these ethnicities)

There also is a tendency to exaggerate so-called "identifiers" and elevate them to "racial" —even racist— stereotypes.

The most believable, less weird, interpretation, is the idea that dwarf women have a tendency to grow a "fuzz" which may or may not be called a "beard" by outgroups, comparable to the "sideburns" or "moustaches" noticeable in some black or southern or middle-eastern (south-american/south-european) ethnicities.

Remember how Frida Kahlo vindicated this "moustache"? Look up pictures of her, and you will see it wasn't that dark or all that "shocking". Hence the fuzz, as in above images, that may or may not be shaved, trimmed, bleached or hidden, depending upon the status, traditions and practices in said dwarven subculture or family.

This interpretation takes into account that Tolkien's books are considered being written by ELves or Humans… both outgroups to the dwarves.

The idea of female dwarves being indistinguishible from male dwarves echoes the ideas of Viking societies in which some women (even lesbian women) were known to join in the fighting/pillaging, wearing "male" armor and weapons, but also echoes to me how until recently any woman who spoke up, or took part in public life, and used the language of male society, were considered "boorish" and "unladylike". Classical Japanese culture is an example wherein women are demanded to remain "ladylike", but men are demanded to remain "boorish": they have distinct speech/language and behaviour… Tolkien's rather male-oriented society (kings, not queens) —even in Jackson's more feminist interpretation— may believably interpret a less "gendered" society (at least in language and movement) as being "one-gendered".

Another idea may be that most dwarves are (on the contrary) extremely jealous of their women appearing in public (echoing many human cultures IRL), which may render concepts of the "female dwarf" as something only dwarves could have information on. Gimli's remarks that they get mistaken for male dwarves, can echo both possibilities of a less-gendered "egalitarian" society, or a highly gendered society in which women are "hidden"/"disguised" when leaving the dwarves' abodes.

Aragorn's "It's the beards" seems the kind of joky, playful remark, resembling a reference to the "moustache" of latinx women. Racist stereotype, yes, but probably okay between fighting buddies travelling together, sharing the same hardships.

Not the answer you're looking for? Browse other questions tagged tolkiens-legendarium the-hobbit dwarves an-unexpected-journey or ask your own question.

3
Are there any female dwarves, and if not, how do they reproduce?

13
Is the theory that dwarf women look like dwarf men limited to the works of Tolkien?
39
What non-canon elements were added to The Hobbit: An Unexpected Journey
7
Could the bearded Dwarf-like Easterlings be Dwarves from Rhun?
18
Small bird knocking on Erebor (Lonely Mountain) at the end of movie The Hobbit: An Unexpected Journey
3
Was there a symbolic reason for Thorin losing his shield in The Hobbit, The Unexpected Journey?
14
How much Dwarvish appears in Tolkien's work?
6
Why does Tolkien make Thorin to be older than Balin, only to present Balin in the Hobbit as "very old-looking"?
4
What did Tolkien write about the beard style of male dwarves other than of Thorin and Co (and Gimli)?
44
Do dwarf women have beards?