What is this Klingon Santa saying?

I just received this by e-mail: 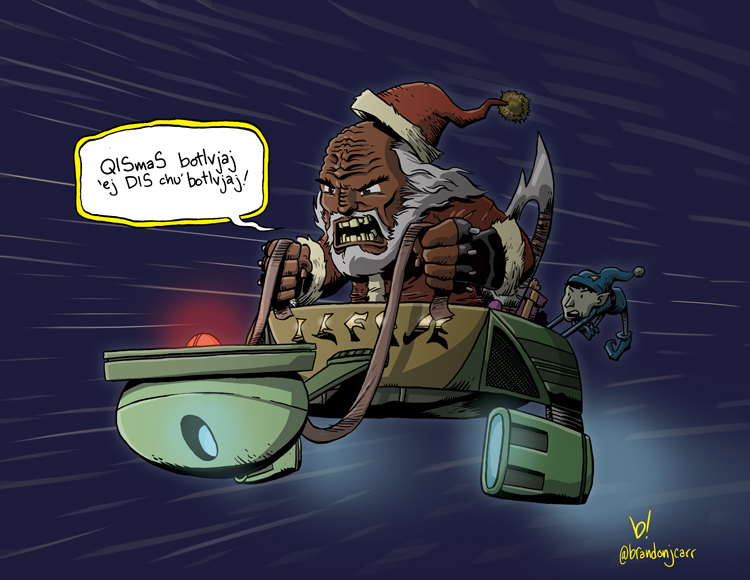 Can anyone fluent in Klingon translate what this Klingon Santa is saying?

star-trek translation klingon-language
Share
Improve this question
edited May 2, 2016 at 14:51

QISmaS = Not a canonical tlhIngan Hol word, but a phonetic approximation of "Christmas".

bo- = Pronomial prefix; indicates that the subject of the verb is second-person plural and the object is third-person. "Y'all do something to him/her/it/them"
tIv = enjoy (verb)
-jaj = Verb suffix; indicates a wish on the speaker's part (similar to the jussive mood). "May it be so."

Edit: Also, the pIqaD text on his sleigh appears to say Sannta. That consonant cluster in the middle isn't really allowed in traditional tlhIngan Hol, but I think the Empire will forgive the artist; after all, it is QISmaS ;)

Indeed, big kudos to the artist for doing their research; most people take a lot of shortcuts when writing "Klingon", and that's quite understandable, but whenever somebody does get it right, it's a real treat for those of us in the Klingon-speaking community :)

According to omniglot.com it means:

Not the answer you're looking for? Browse other questions tagged star-trek translation klingon-language or ask your own question.

9
Klingon for 'arrow'?
3
Is there any more Klingon Opera?
24
Grammar and quality check for a Klingon warning notice for server room
9
Is this real Klingon?
9
Are there words in Klingon for different types of numbers (ex. integers, rational numbers, etc.)?
2
What about half-Klingon hybrids?
10
What does Worf say in Klingon in the TNG episode "All Good Things"?
8
What does this reportedly Klingon text say in Revenge of the Sith?
6
Dog training commands in Klingon
3
What does the Klingon phrase in this ritual mean?