What did the Dwarvish Runes Say in the Final Shot of the Hobbit (Part I)?

In the final shot of the first Hobbit film, there is a series of a runes displayed prominently on the wall

behind the treasure hoard which hides Smaug

I cannot, unfortunately, locate a screenshot for it - too current, I think. Can anyone tell me what it said, both in the Tolkien language and in English?

For bonus points, can anyone tell me what the sign that Gandalf placed on Bilbo's door was?

Took me a while! I actually had the same question, then researched online and found this thread.

The way Tolkien writes 'The Hobbit' seen in the published books:

lead to the easiest clue; the first section is the word 'The". Yes, I know, so intense. Further analysis if TOLKIEN'S RUNES (I tried Elder, Younger and Modern Futhark initially) reads 'Founda-.

So after watching that hi-res video of Joe Letteri talking about the VFX in The Hobbit, I could finally make out the inscriptions on the pillars in Erebor. 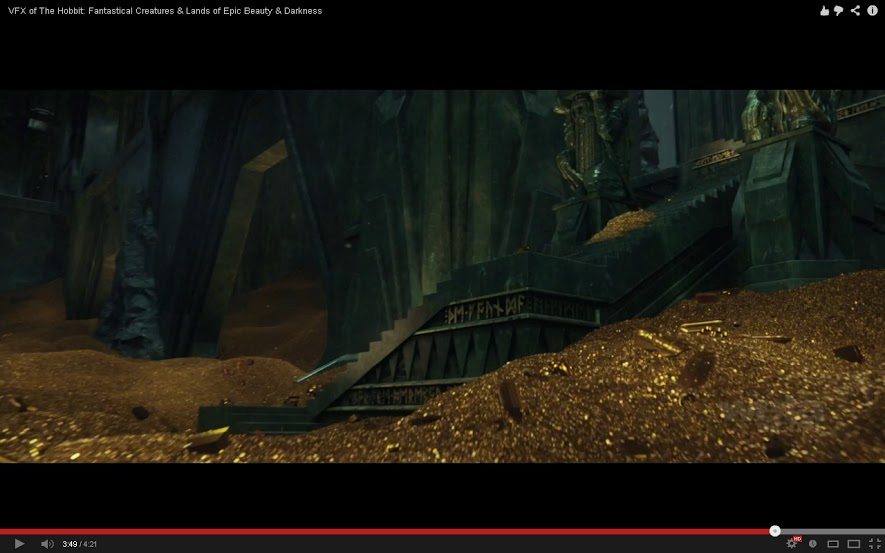 On the "top row" of the "left face" can be seen the writing "the founda", and I can only assume the sentence continues on the same face of the pillar at its bottom (to read "foundation" or "foundations" I suppose) as it's obvious there's writing along the "bottom row" of the "left face" of that same pillar, the last few that seem to read "ereb" (meaning "Erebor" perhaps).

On the "top row" of the "right face" of the same pillar the inscription reads "hammer".

It looks like there's more writing on the further pillars/walls (at the top of the flight of stairs near the statues), but even at 1080 I think it's impossible to read them.

After watching the scene frame by frame, this is what can be read in the stairs:

It's written in Futhorc (old Anglo-Saxon runic alphabet) and not in Cirth (Tolkien's invented runes based on Futhorc and Elder Futhark), just as all dwarvish texts in the Hobbit book. The meaning is the following:

alk of Durin masters of stone

Note: I don't understand why herebor is written in the second line; also I'm not sure about mae, thus the parentheses, as it may be an incomplete word and is very blurry in the film.

So that, it seems that the walls and stairs of Erebor narrate the foundation of Erebor by Durin's folk.

I will only take the bonus points for $200 please.

And I assure you there is a mark on this door - the usual one in the trade, or used to be. Burglar wants a good job, plenty of Excitement and reasonable Reward, that’s how it is usually read. You can say Expert Treasure-hunter instead of Burglar if you like... - Glóin

And here's Tolkien's drawing of the mark (as far as I am aware, the source is "J.R.R. Tolkien: Artist and Illustrator" by Hammond and Scull, on page 99, there is a colored pencil drawing by Tolkien entitled “Gandalf”, illustration number 91)

After about three days of trying to get a screenshot of that scene, this is the best I was able to do. The scene in question moves pretty quick and those stairs are pretty dark, so there's a lot of compression artifacts (and this is from the highest quality video I was able to find). 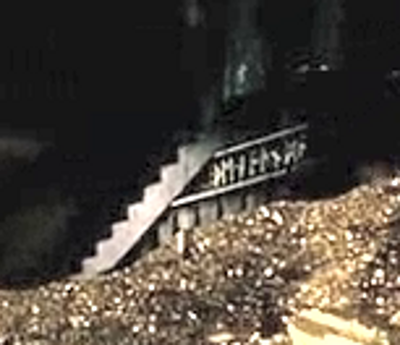 The interesting thing about Dwarvish (Khuzdul) is that it was an extremely private language. Only a handful of words (and another handful of place names) were known to non-dwarves. Reportedly, even the "true" names of Dwarves were never shared with other races. So the vast majority of dwarvish you see is simply transliterated English. And there's apparently more than one alphabet.

I'm afraid the screenshot isn't detailed enough for me to be able to make out more than a letter or two here and there. Maybe you'll be able to find/make a higher quality image once the DVD comes out.

The runes are old english Futhorc and the language is English. It's transliterated using the same unique and obvious system Tolkien used in the Hobbit (using futhorc characters for sounds that don't occur in the original language like x, j, c vs. k, v vs. u, etc., preserving silent Es). The movies used a guy that was a Tolkien linguistic expert and he probably came up with this. There is not enough attested Khuzdul (Tolkien's dwarven language) in the canon to create an inscription that long an inscription. English in futhorc is easy but tricky enough to see that someone knowledgeable created this. A real dwarven inscription would be in Khuzdul using the Cirth runes. An example is shown on Balin's tomb in both the books and the movies in the Hall of Mazarbul scene.

29
What symbol does Gandalf put on Bilbo's door?

50
What age group did Tolkien write The Hobbit for?
6
Are the runes on the Magic Mirror the same as the Dwarf runes in The Hobbit?
6
What does Gandalf say To Galadriel in the Hobbit trailer?
9
What parts of the Hobbit book are covered by the first film?
23
In The Fellowship of the Ring, why did Tolkien switch the Elvish and Dwarvish runes?
11
What does Kili say to Tauriel in dwarvish when he gives her the moon rune, in The Battle of The Five Armies?
15
Do the dwarves know what a "hobbit" is?
11
Why is Bilbo's door and Hobbit house so incredibly oversized in Tolkien's own final illustration in The Hobbit?