Are there multi-headed trolls in Middle-earth beyond The Hobbit reference?

I was just reading about Bilbo and the three trolls: William, Bert, and Tom.

At the end of the quote, there is a reference to multi-headed trolls.

William choked. "Shut yer mouth!" he said as soon as he could. "Yer can't expect folks to stop here for ever just to be et by you and Bert. You've et a village and a half between yer, since we come down from the mountains. How much more d'yer want? And time's been up our way, when yer'd have said 'thank yer Bill' for a nice bit of o'fat valley mutton like what this is." He took a big bite off a sheep's leg he was toasting, and wiped his lips on his sleeve.

Yes, I'm afraid trolls do behave like that, even those with only one head each.
- The Hobbit p.35

Does Tolkien further describe multi-headed trolls in his notes, or is the reference just a one-off limited to The Hobbit?

"The Hobbit", when originally written, was simply a story for his children. A lot of the book was written as if actually being told to the reader. See the above quote: "Yes, I'm afraid trolls do behave like that..."

I have heard many stories as a child of giants, ogres, and trolls with multiple heads. And usually they were defeated by the hero causing them to fight among themselves, much like Gandalf does in the book.

I don't think Tolkien meant to imply there were multi-headed trolls in Middle-earth, as much as to relate his story to other tales the reader might be familiar with.

Multi-headed trolls do not appear elsewhere in Tolkien's works, but they appear in other stories Tolkien would have been familiar with, most notably "Soria Moria Castle" from Andrew Lang's The Red Fairy Book.

In The History of the Hobbit, John Rateliff notes about this line (which in the original draft read "Yes I am afraid trolls behave like that, even those with one head only.")

Trolls with multiple heads appear in many stories, perhaps the most famous of which is Dasent’s ‘Soria Moria Castle’, where the hero must confront and defeat first a three-headed troll, then a six-headed troll, and finally a nine-headed troll (East o’ the Sun & West o’ the Moon [1888], pages 397–401). This same story might have contributed to the naming of Moria; see Tolkien’s letter to Mr. Rang, August 1967; Letters p. 384.
The History of the Hobbit - The Second Phase, II. Trolls

As Rateliff points out, Tolkien refers to this story as a possible source for the sound sequence he used when naming Moria.

In fact [Moria] first appeared in The Hobbit chap. 1. It was there, as I remember, a casual ‘echo’ of Soria Moria Castle in one of the Scandinavian tales translated by Dasent. (The tale had no interest for me: I had already forgotten it and have never since looked at it. It was thus merely the source of the sound-sequence moria, which might have been found or composed elsewhere.) I liked the sound-sequence; it alliterated with ‘mines’, and it connected itself with the MOR element in my linguistic construction.
Letter to Mr. Rang, August 1967, The Letters of JRR Tolkien #297

In The Annotated Hobbit, Douglas Anderson makes a similar observation, and also points out that this story along with an illustration of such a troll was included in one of Tolkien's favorite children's books. 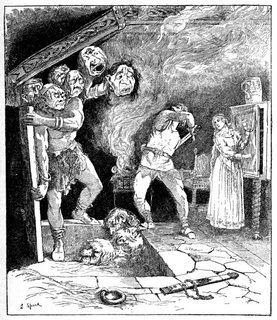 Often in fairy stories, trolls are depicted as having many heads. The illustration above, by Lancelot Speed (1860-1931), is of the troll in the story “Soria Moria Castle” in The Red Fairy Book (1890), edited by Andrew Lang. The Red Fairy Book also contains one of Tolkien’s favorite childhood stories, that of Sigurd and the dragon Fafnir.
The Annotated Hobbit

It is thus likely that Tolkien was trying to reference other fairy stories that his children would have been familiar with.

Not the answer you're looking for? Browse other questions tagged tolkiens-legendarium the-hobbit trolls or ask your own question.