1980s robot cartoon. A boy, girl and a baby robot, they were red bodied with white heads

Does anyone remember an obscure short lived cartoon in the 1980s. I remember it had 3 characters, boy, girl and a baby robot. Red bodies, white head, yellow belts and yellow and blue shoes. They made toys of them and when you used batteries they played the theme song.

story-identification cartoon
Share
Improve this question
edited May 26, 2020 at 18:43 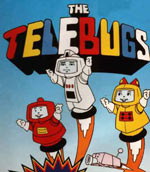 The Telebugs were a hi-tech trio of merry monitored robots created by absent-minded Professor Brainstrain - or indeed, 'Bwainstwain' owing to his unfortunate lisp. Theses robots were 'Pwogwammed to help people in twouble', but more specifically to combat the new threat of computerized villains and advanced adversaries springing up around the country.

The Telebugs' leader was a white-shelled droid called Chip. He was a calculation robot, able to process data and statistics at a phenomenal rate. Samantha was the yellow one. She was a hi-tech monitor and tracking device. Her bow-tie was actually a spinning radar. Then there was Bug, the red robot programmed to acquire video footage and pictures. Bug came with a sidekick called Mic, a mobile independent camera.

And yes, there were toys.

Robot Man. Tried to post a pix. Not sure if it worked

Following up with an expanded version of t.k.'s answer:

This may be the cartoon adaptation of the Robotman character, Robotman & Friends. Robotman was perhaps better known for his newspaper comic-strip, which was later renamed after support character Monty.

In 1984, Peter Shelley recorded an album (apparently released in 1985) called "Robotman and Friends, Straight From The Heart". This album was the soundtrack to the animated cartoon above. The soundtrack included keyboard work by John Woloschuk. It was also co-produced by John Woloschuk. One of the songs, though, goes back to 1977. It appears that Mr. Shelly was working on this concept for a while.

In 1985, United Feature Syndicate asked Jim Meddick to create a comic strip based around the Robotman character. The visual appearance of Robotman was about all that Meddick kept from the original Robotman. Over the years, the strip went through some changes. Eventually it was renamed "Robotman and Monty". Later, Robotman was phased out and the strip was again renamed, this time to just "Monty". http://www.klaatu.org/Robotman-records.html

The appearance is not quite the same as you remember, with Robotman and Oops being in red and yellow, Stellar being in white and pink, and there was also Lint, a white fuzzy humanoid creature. 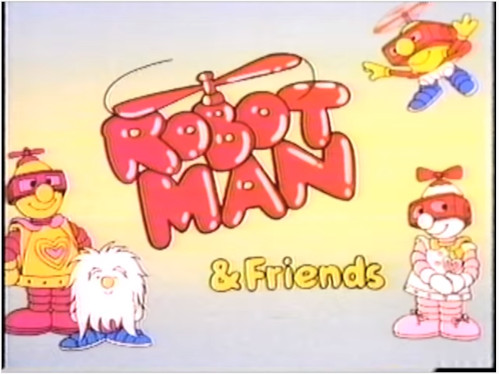 And indeed, there were toy dolls released of the characters that would play music. 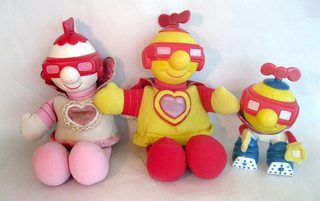 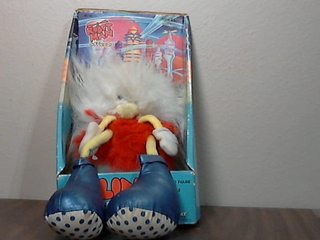 More merchandise can be found on Jim Meddick's site.

13
80s Cartoons with three robots with "screen" heads one white, one yellow and one red

11
A cartoon/anime with a blonde-haired boy with blue eyes and his father(?), they're looking for 7 gems/diamonds
2
Anime/cartoon? - redhaired kid in yellow jacket fights monster with a magic glove that dispenses food
5
Mecha anime where 2 girls fight with mechas
13
80s Cartoons with three robots with "screen" heads one white, one yellow and one red
3
There was this cartoon show that I used to watch as a kid. I don't really remember but the main characters were 2 guys and a girl?
10
Animated movie with a cute little girl, a talking dog, and a talking humanoid robot
5
Pokémon-like movie where the characters fuse with their monsters. The plot includes a school trip to a museum and an Asian baby that was a king