What happened to this scene?

I've watched LOTR mutliple times and the extended editions. Read multiple making of the film books and character and extra etc. I'm a LOTR movie nerd however I have never seen this scene except this picture. Could someone please shed some light on it, cheers 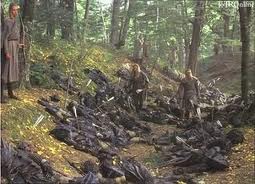 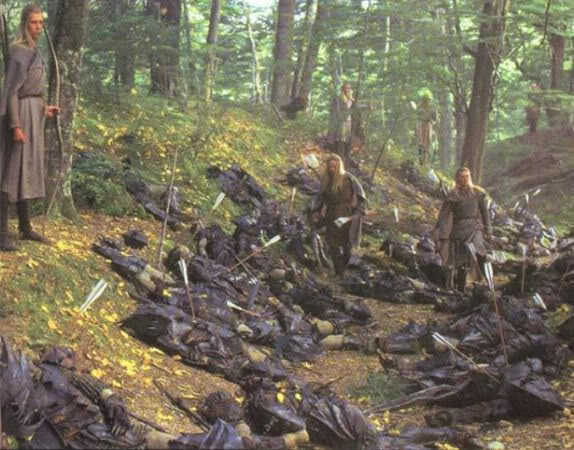 This scene was never used in the film.

It's a scene that depicts orcs coming from Moria into the woods of Lothlorien.

Based on the fact that there are tons of dead orcs with the arrows sticking out of them, this is unlikely to be the aftermath of Boromir's final fight.

I would venture to guess that this is a result of Eomer's attack on the orcs when they were carrying Merry and Pippin (which DID happen near the TreeBeard's forest, as that was where the orcs fled)

It could be the scene from Fellowship of the Rings where Boromir is killed. That does look like it could be Legolas standing there, but the hair is too short to be Legolas, and Legolas typically wears tight-fitting leggings with a tunic that reaches to mid to upper thigh. Éomer's blond hair is darker than Legolas's, and the long dress-like garb is typical of the Rohirrim in the Jackson movies.

On the other hand, in the scene where Éomer finds Théodred after Théodred is attacked and wounded by Saruman's Uruk-hai (Orcs), it is pouring rain, very dark greyish, and looks cold and miserable, not to mention that all the fallen victims are lying in water in a riverbed.

The above picture seems to show glowing light shining through the trees and sunny surroundings. I think I'll check the movie to see and will update my answer accordingly. My guess is that it is Éomer, but I don't think it's from the scene where Théodred is rescued.

As far as I can recall, and I've seen these movies a ton of times, there is no scene with Éomer standing over any of the Uruk-hai killed when the Rohirrim took out the Uruk-hai that were carrying Merry and Pippin to Saruman. Please correct me if I'm wrong.

[Edit] I just watched the scene from this version of the trilogy, where in The Two Towers the Uruk-hai flee Helm's Deep for Fangorn Forest; there is no bit where any character is standing over a pile of dead Uruk-hai or Orcs. The entire gang is sitting on horseback, watching the Uruks run into the forest. They shout a warning at the Uruks to not go into the forest, but otherwise they don't go after them.

Could this be a production outtake? Or a screenshot from the documentary portions of the trilogy version I linked to above? This could be a possibility.

Not the answer you're looking for? Browse other questions tagged tolkiens-legendarium the-lord-of-the-rings movie deleted-scenes or ask your own question.

47
Do Balrogs Have Wings?
89
Are orcs and goblins really the same thing?
25
Why did Teddy (Jeff Daniels' character) pick Glorfindel from the Council of Elrond
21
Where is it said that the Witch-King had a fire-sword?
7
Old children's film or tv special where man has a magic bucket of paint?
12
Who's standing behind Theoden in the "So it begins" meme?
14
Movie in which all paper vanishes because of a bacterium
4
Which version of The Return of the King contains this changed line?
15
Movie with a battle at a huge white castle with a long drawbridge?