What kind of rabbits did Radagast use to pull his sleigh?

In the Hobbit movie, Radagast has a sleigh that is pulled by rabbits. At one point he says something along these lines to Gandalf:

What kind of rabbits are they, and where in Middle-Earth/the Tolkien universe do they fit in?

They are Rhosgobel rabbits, but they are an entirely original concept that appears in the movie alone.

Rhosgobel, anyway, is where Radagast lives.

Radagast lived for much of his time in Middle-earth at Rhosgobel in the Vales of Anduin, on the western eaves of Mirkwood, between Carrock and the Old Forest Road, near the Gladden Fields, its name deriving from Sindarin rhosc gobel meaning "brown village".1

Mirkwood is this forest. The Misty Mountains are on the left (the Shire being farther in the West) and the Lonely Mountain on the right. Going South, you'd see Rohan, Gondor and Mordor. 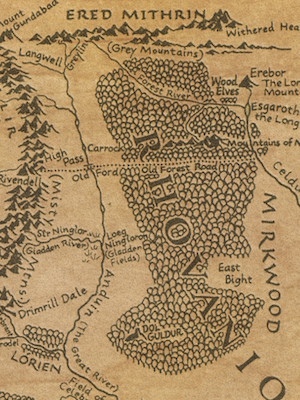 The line is "These are Rhosgobel Rabbits, I'd like to see them try!" Rhosgobel is the old home of Radagast the Brown. The house is said to have been located between the Carrock and the Old Forest Road, on the western borders of Mirkwood as per the Lord of the Rings: The Fellowship of the Ring as well as Unfinished Tales. The rabbits themselves where added for the movie version and do not show up in Tolkien's works.

38
What non-canon elements were added to The Hobbit: An Unexpected Journey

11
Trolls and the Olog-hai
9
Gandalf's different attitude towards magic rings in The Battle of Five Armies and The Fellowship of the Ring
14
What was the point of the were-worms in the movie?
7
Did Sauron literally anticipate the arrival of the Istari?
2
Is there a companion or guide to The Silmarillion?
15
Is there a way to determine the respective canonical status of Tolkien's Middle-earth related works?
38
Does Gandalf need to eat, drink, and sleep?
71
Were wizards initially intended to be much more common?
8
In-universe, is there any reason Gandalf considered the number thirteen to be unlucky?