Is the Borg Collective limited to bipeds?

How does the Borg deal with non bipedal sentient lifeforms? Are there any who have been assimilated into the Borg Collective?

Other than the Species 8472 comment I made, I've found 2 candidates and one interesting note:

The Greech are this thing: 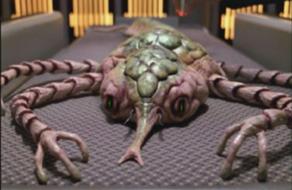 In the Voyager novel Unworthy, they, along with the Neyser (humanoid), the Dulaph (sphere-shaped silicon-based species), the Irks (a bio-mimetic species), a moth-like species, and a noncorporeal species, created the Indign cooperative in an attempt to mimic the Borg, when the Borg considered them unworthy for assimilation.

So in the novels at least, it seems possible (although unlikely) for non-humanoids to be assimilated. However, given that the Borg Queen is humanoid, it could well be that the Borg idea of perfection includes humanoids. Their attempted assimilation of Species 8472 would then be explained as an attempt to gain knowledge of their biology in order to adapt it to the humanoid shape.

So, No, the Borg are not limited to bipeds if "omnicordial lifeforms" are not bipeds - and even if they are, it is unlikely they are limited since they did at least try to assimilate the 3-legged Species 8472

Assimilation will require fitting into the Borg structure. I.e able to use regeneration alcoves etc, the assimilation process of non-bipedal life forms could just use the head and torso of the the individual assimilated and replace a quadrupedal or hexapedal limb system with a mechanical bi-pedal limb system. As is the case with the Borg Queen. Having not seen her original form, she may not have been a biped.

Not the answer you're looking for? Browse other questions tagged star-trek aliens borg or ask your own question.

73
If the Borg assimilate a planet of idiots, does the Collective become dumber?
17
What happens if the Borg queen dies?
20
The Borg uses many numbers as species designation, who were Species 1?
4
How can The Collective have The Borg Queen?
1
Does each drone have a copy of entire Collective memory?
18
Why are there so many human Borg?
8
When did the Borg contact the Cardassians?
4
How could Hugh infect the collective?
11
What is the end state of a starship that has been assimilated by the Borg?
20
Are there examples of “liberated” Borg who, even after a long time away from the collective, wished to return?