I've realised something which, given the canon of SG-1, seems odd. If we go on the idea that the Ancients did create the Stargate network (obviously this wasn't mentioned in the film and possibly the idea of the "Ancients" didn't even exist at that time) then why is the point of origin for Earth the symbol of a pyramid under the sun? This obviously has everything to do with the Goa'uld and their reign on Earth, even if it is just a pyramid and not symbolic of a Ha'tak. 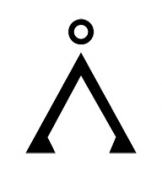 A couple of things...

They obviously still needed the symbol to be the same as the movie, but given the SG-1's canon, it makes no sense for the symbol to be of a Goa'uld pyramid ship or even just the pyramids built under their reign since the Ancients obviously wanted them gone, and they probably didn't even rule Earth at the time the gate was created.

EDIT: Now, in the film, even though it doesn't explain who built the Stargates, Ra or his species built the gates it can make sense to use such a symbol, in which case it becomes a casualty of changing ideas in SG-1.

According to the Stargate Wiki, the gate using this symbol as the point of origin was brought by Ra from an unknown location. This gate became the gate used by the SGC. The point of origin on the gate found in Antarctica ("Solitudes", S01E17, now known as the "Beta gate") is the original Lantean-specified one: 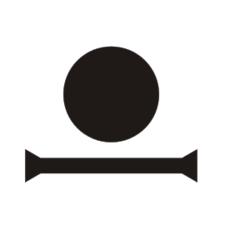 The gate symbols actually represent a sound in Lantean, they work that out when Morgan kept saying Proclarush Taonas when in reality she was actually giving them the gate address. And when Jack was infected by the Ancient knowledge device...again...he sounded out the symbols.

I've recently started watching SG1 all the way from the beginning again (been on my bucket list as I was way younger than most when the first series came out).

It's all well and good to say why this, why that, but we must remember the show started off as what was meant to be a one off movie. THEN due to popularity, a series was commissioned afterwards and BOOM like dynamite it was epic.

The Ancients are never discussed in detail until season 3 when O'Neil gets uploaded with all their knowledge and builds an energy device to attach to the SGC's power grid, to dial an 8th chevron, to travel to an entirely new galaxy to speak to the Asgard (though first mentioned when rescuing Ernest from the meeting place of the "Four Ancient Races" (Asgard, Knox, Ancients, and the last one slips my memory I apologise! :/ )

It is only when O'Neil has all this knowledge that Dr Daniel Jackson helps to translate some of his speech, to clear up the fact that he was speaking in and of the "Ancient ones".

As the Stargate on earth was never intended to be used there, and was brought by Ra when he enslaved the ancient Egyptians, it is fair to then infer that the gate system, and Earth's gate (the first one), was created before Earth's pyramids, and before the Goa'uld existed in the galaxy (who then later designed their ships the way they did, and the pyramids are ONLY the shape they are to accommodate Goa'uld mothership landings/dockings).

So it is THEREFORE fair to say the Alpha gate was built for a planet on the other side of the galaxy probably (or even the galaxy the Ancients originated from - as discussed in Atlantis), and the origin symbol is pure coincidence. Ra scavenged the gate, among many more probably for other worlds he would then establish human slave colonies on (mining for Naquida(?) In most cases, or as host colonies). He may simply have taken a liking to the origin symbol for its likeness to his mother ship, and then saved it for a world with only ONE sun (at one stage he probably had a whole stack of Stargates sitting in his mum's garage for later use!).

And then he invaded earth, enslaved the Egyptians, and had them build pyramids for him to slot his ships on top of like Lego bricks, or galactic sized birds and the bees.

There could be COUNTLESS tangents we could go on, to explain away any plot holes in the writers work. Maybe the gate is from a whole other universe, or alternate reality, or Ra collects millions like they're Goa'uld Pogs (or Tazos as they were called in Australia when I was a kid haha).

Simple question... Do you enjoy the show? Does it bring you joy? Do you love the characters? Do you enjoy the plots of each episode? If you answered yes then let's forgive the writers for a few gaps here and there.

After all, its all fantasy and could never exist in real life. Or does it already, and the show is just a global initiative to desensitize the world to the idea of galactic travel by wormholes, before coming out and confirming it as real? Haha maybe the ratings were too good that it became impossible to break the news due to global meltdown haha

21
Why does Earth have two stargates?
14
What Was the Purpose of Different Point of Origin Symbols?
13
What Does the "Point of Origin" Symbol Actually Do?

18
How Do Stargates Communicate Before they Open a Wormhole?
14
How Could the SGC Dial the Destiny Without Knowing Where It Was?
10
Is a Dial Home Device Connected To A Stargate In A Wired or Wireless Fashion?
20
How can there be more than 39 stargates when each gate needs a unique "point of origin"?
4
Beta Gate Point of Origin Glyph
7
Is it impossible for Earth Stargate be modded to dial all Stargates?
12
Are any of the hieroglyphs, runes, etc. appearing in Stargate intelligible/meaningful?
5
Why was the Alpha Gate/Tau'ri symbol important to the Ancients?