Did the Doctor and Jabe ever have intimate relations?

In the main room of Platform One in the reboot episode "The End of the World", there is a scene where Jabe of the Forest of Cheem is making suggestive conversation with the Doctor, with the specific mention of prostitution and other playful banter. Rose, standing right next to them, was acting suspiciously coy as the two walk off into what appears to be a bedroom. Are we to believe that Jabe and the Doctor had sexual relations? What repercussions would there be if a Time Lord mated with an alien being?

I don't think so - at least not in the classic way.

In the end he mourned her sacrifice and is obviously hurt, but that's nothing special here, he'd probably do (and does) the same for other companions, even if they're just a "companion of the week".

When they both first met and presents are exchanged, the doctor is empty handed (tapping all his pockets without finding something at first). His immediate reaction is blowing some air into her face: "I give you air from my lungs." Jabe answers: "How intimate."

Based on that reaction I could think there's been some "special moment" happening, but probably nothing more. However, she notices he's no normal guy (as far as you could consider an alien normal): Shortly after she tries to identify him/his species with some kind of portable computer.

Also, what you consider a "suggestive conversation" is more some kind of trying to determine Rose's role in this (at that moment she knows he's a Time Lord, but she doesn't know Rose's connection to him). So she at first asks what she is - wife, concubine, prostitute, and some other possibilities (she is noble after all, so she probably expects others to "own" someone following them if there's no relationship).

She probably wants to spend some time with him, not necessarily for sexual reasons, but rather curiosity. She just didn't want to get into the way of a possible wife or anything (again: probably due to her noble origin).

In the end, the doctor starts leading her "I'm all yours", which causes Rose to answer with "I want you home by midnight", because she's quite annoyed by Jabe suggesting her being a prostitute, so she just tries to give it back a bit by playing the parental role.

They also don't walk into a bedroom. The light green backdrop seems to be another door on the other side of that corridor (it's the same color and pattern as the door the Doctor and Jabe pass through): 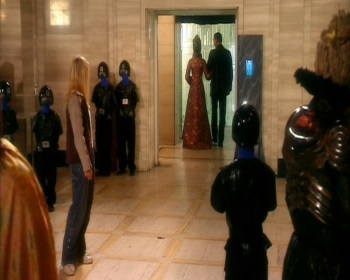 In the next scene they're passing through the maintenance corridor or whatever it's supposed to be.