What does the Starfleet insignia represent?

A consistent part of the Starfleet uniforms in the Star Trek shows and movies has been some version of this insignia:

I originally thought this was a stylized letter "A", but that doesn't really make sense.

What is this symbol supposed to represent?

It is my understanding that the symbol is a stylized version of the NASA emblem of our time. 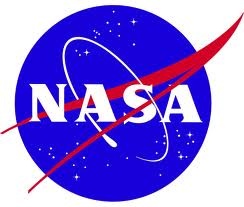 Memory Alpha also leans towards a connection between Star Trek and the NASA badge:

In a form of fact emulating fiction (and vice-versa), the US Air Force Space Command badges have a delta arrowhead very similar to the 1960s-designed Enterprise insignia, while the 22nd century Starfleet insignia seems to be a deliberate synthesis between the TOS era pennant and the NASA logo.

This has been retconned over the years. This is the most current version, that I know of:

This is the NASA insignia: 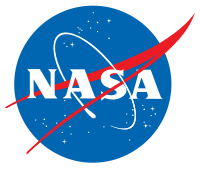 This is the United Earth Starfleet insignia (in the 2150s, ENT-era): 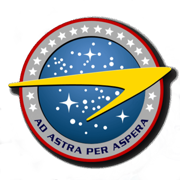 These are the TNG-DS9-VOY-era Starfleet insignias: 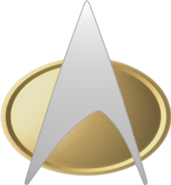 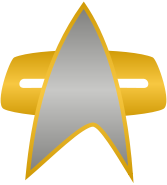 And one further variation from the future:

Originally, this was Starfleet's insignia in the TOS era (no explanation given): 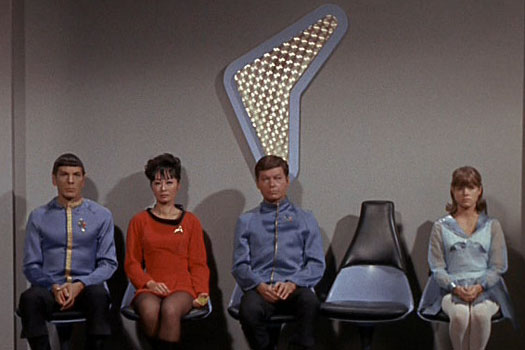 The truth is, the symbol we all know was originally the assignment patch for Kirk's Enterprise. In that era, each ship had their own symbol, and the pennant seen above was Starfleet's. The Enterprise symbol was later adopted for all of Starfleet in recognition of that five-year mission (in-universe). For alternate examples:

This is Admiral James Komack, wearing the Starfleet admiral patch/pin of that time: 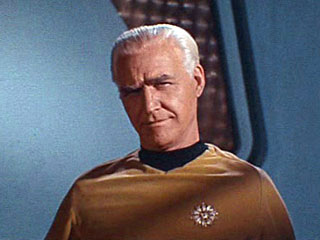 This is Commodore Matt Decker, former captain of the USS Constellation, wearing the insignia for his ship: 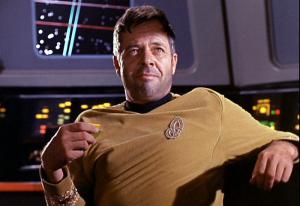 From left to right, these are the assignment patches for the USS Exeter, the USS Defiant, and finally, the USS Enterprise:

And there's a whole lot more, in every era prior to TNG.

I vaguely remember a Star Trek novel named "Federation" where both the TOS and TNG Enterprises are involved with Zephram Cochrane and in that novel a decsription of the insignia was given based on the physics of the warp drive.

In that book, the insignia represents how warp drive sidesteps relativistic mass dilation. The top curve represents the energy required to continue accelerating at near-light speeds, which approaches infinity. IF you could somehow exceed the speed of light, that would then work backwards (higher energy would result in you moving slower. Time would also run in reverse.). The lower curve represents how warp drive cheats. However, being a book, this is not canon

I seem to remember reading an article back in the early '70s that attributed some influence on the emblem to the constellation Aquila, the Eagle. I can not attest to the accuracy of this, but there is some resemblance. 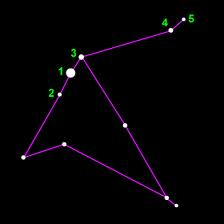 Its the USAF Space Command insignia prior to NASA. 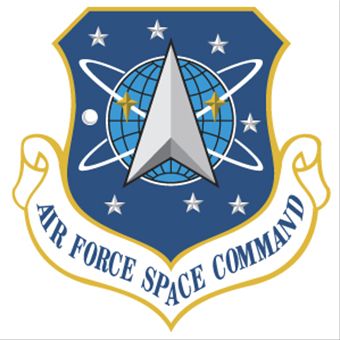 I've figured it out... it's an upside down harp. Occurred to me while watching this video.

I don't know why. You can't prove it and they don't mention it, but, I always thought the insignia looks like the anarchist symbol. https://en.wikipedia.org/wiki/Anarchist_symbolism#mediaviewer/File:Circle-A_red.svg Things such as, the non-interference principal, and the fact that Gene and company were looking to the future, it might be possible they saw this insignia as a mixed or hidden version of it. Purely a guess but merits pointing out. Spock's Vulcan beliefs also closely match voluntaryism. Most people won't know what that is without a little reading. Although that is totally contradicted by Gene's belief in a united earth future. Also maybe he saw the AA symbol somewhere? Now I'm being funny.

The insignia also refers to the arrowhead like shape of the warp field, as initially sketched and theorized, and later proven by Zepherin Cochran.

Not the answer you're looking for? Browse other questions tagged star-trek star-trek-insignias or ask your own question.

16
Why does Commodore Decker have a different insignia on his uniform?
18
Did Starfleet(TOS) adopt the Enterprise logo after the 5 year mission?

10
Has Starfleet improved interstellar travel?
22
Has Starfleet ever made First Contact with a pre-established space-faring species oblivious to alien intelligence?
9
Why does Chakotay wear apparent lieutenant commander's insignia?
115
What's the story behind the Spock helmet?
38
Do Starfleet personnel ever salute each other?
32
Did Starfleet ever have an Enterprise-class of starship?
8
How could the footprints in the sand be seen by the Shenzou from space?
7
Why did some vessels in the 23rd Century use unique assignment patches?
13
Why does the Federation insignia have two acronyms?
6
Why don't Starfleet captains force other Starfleet ships to lower their shields every time they fight?