How does Sam bleed?

During the arena sequence in Tron Legacy we see Sam take a grazing hit from a disk and bleed a few drops of blood, thus identifying him as a User.

From a plot and drama point of view this is very important but it appears to break the rules of the virtual world. Programs don't bleed, Quorra doesn't bleed, but Sam does. If he is a simulation within a virtual world how can he bleed? Or, more importantly, why is Sam simulated as having blood when programs do not?

Interesting points: in the original Tron movie Kevin Flynn seemed to absorb the energy of a program when it 'died' and was able to change colour, all of which indicate that he could interact with the world in ways different than other programs.

The presence of Sam in the virtual world is not the same as for others victuals words, he is not "Jacked-In" like in the Matrix, he is completely Digitized, all his molecules are transformed into code. 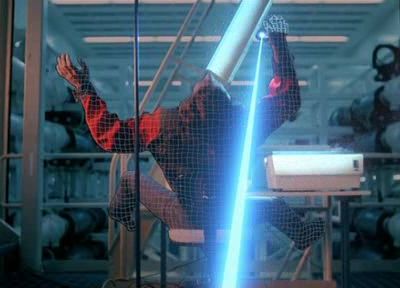 Thus, if it's not real Sam that control his simulation of himself from outside, it's a full and complete simulation of Sam that run, including his brain, all organs and of course, his blood.

If you ask how a 80's computer could run a full and complete simulation of a human being, well, it's just a movie! But the Grid seam to have done some simplifications, of adaptations to how it works. User sometime react like a normal program (the need of a disk, circuitry in the original Tron, etc), but sometime like humans (blood among others). It's like the simulation of a user works like a human locally, but like a program globally. The separation between those is more an artistic decision than a rationalized deductions.

As for program, they don't bleed because nothing in theirs code say they need to bleed; they are build of pure code. In Tron Legacy, when a program is hurt, the wounded part shatter into smalls cubes, an representation of the bit theirs code is build of, literally theirs building blocks : 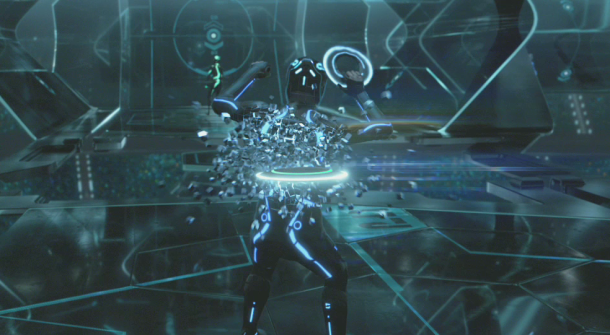 11
Is the inner world of Tron a simulation or an alternate reality?
18
Is Quorra human now?

8
In Tron: Legacy, how did Kevin Flynn recognize Rinzler as [REDACTED]?
8
How did Clu plan to bring his army into the real world?
5
Do Programs/Users need to eat or drink?
9
Where is this missing part to the “Tron: Legacy” soundtrack?
8
Why does Rinzler (Tron) purr?
1
How does Sam know Quorra is an ISO?
0
How can Sam appoint Bradley to be CEO?