Did Kirk and Uhura actually kiss?

Recently I rewatched the Star Trek episode "Plato's Stepchildren" and observed the well-known Kirk-Uhura kiss, which occurred under the psychokinetic duress. I know that the kiss was scripted, but as filmed I could not tell whether Kirk and Uhura's lips actually met. There was no doubt with the Spock-Chapel kiss in the same episode, but the Kirk-Uhura kiss was shot in such a way that the studio had plausible deniability if the TV audience reaction were extremely negative. Perhaps the first scripted interracial kiss on television wasn't a kiss at all.

Did Kirk and Uhura actually kiss?

Acceptable proof would be a quote from Shatner or Nichols or someone else on set that day saying the kiss actually happened.

William Shatner recalls in Star Trek Memories that NBC insisted their lips never touch (the technique of turning their heads away from the camera was used to conceal this). However, Nichelle Nichols insists in her autobiography Beyond Uhura (written in 1994 after Shatner's book) that the kiss was real, even in takes where her head obscures their lips.

Wikipedia, with a citation.

Here's an interview with Nichelle Nichols in which she directly confirms that she and Willian Shatner did kiss during the filming of TOS: Plato's Stepchildren.

Apparently the first take was a bit too realistic

Director : You kissed her

Shatner : I know I kissed her, I thought that was what we were doing?

The Director [David Alexander] evidently asked them to scale it back for the version that was ultimately used in the episode, which merely has them pressing their lips together. 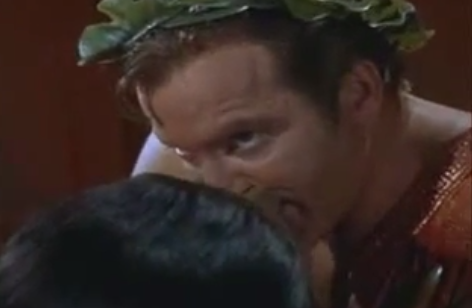 One more thing to consider is that during that time on television, kisses were almost always done in such a way that the audience would not be able to see their lips touching. So in retrospect, the fact they were instructed to do it the way they did really had nothing to do with race, it was just the way it was. From looking at the scene again it really doesn't appear to be much of a kiss and I would say it appears that their lips may not have really touched. I suppose what they did "represented" the first inter racial kiss. I guess the answer depends on what definition you use as what constitutes a real kiss. Back at the time they filmed this scene( in the 60's), the fact they even got close enough to even appear to be kissing is a big deal and if they didn't touch I don't think in the 60's it would have made much of a difference. It was the perception they gave.

Unfortunately, what Gene meant by "Let's shoot it two ways" was that we'd shoot the Kirk/Uhura kiss twice. In the first take, we's actually kiss on camera, and in the second, Nichelle and I would turn our bodies as we embraced, so that my back was to the camera long before our lips would have ever touched. We'd give the impression of kissing without ever touching lips. Sadly, when push came to shove, the network got their way and the no-contact kiss made it to the airwaves. For that reason, the widely held assumption that Star Trek features the first interracial kiss in the history of television is absolutely untrue. And if you happen across the episode, look closely and you'll see what I mean.

And from Nichelle Nichols's Beyond Uhura...:

Finally, we were back on the set, ready to shoot the scene Shen suddenly the director realized that this would be an interracial kiss. He panicked... skipping a bit ...Knowing that Gene was determined to sir the real kiss, Bill [William Shatner] shook me send hissed menacingly in his best ham-fisted Kirkian staccato delivery, "I! WON'T! KISS! YOU! I! WON'T! KISS! YOU!"
It was absolutely awful, and we were hysterical and ecstatic. The director was beside himself, and still determined to get the kissless shot. So we did it again, and it seemed to be fine. "Cut! Print! That's a wrap!"
The next day they screened the dailies, and although I rarely attended them, I couldn't miss thus one.Everyone watched quietly as Kirk and Uhura kissed and kissed and kissed. And I'd like to set the record straight: Although Kirk and Uhura fought it, they did kiss in every single scene. When the non-kissing scene came up, everyone in the room cracked up. The last shot, which looked okay on the set, actually had Bill wildly crossing his eyes. It was so corny sync just plain bad it was unusable. The only alternative was to cut out the scene altogether, but that was impossible without ruining the entire episode. Finally, the guys in charge relented. "To h--- with it. Let's go with kiss." I guess they figured we were going to be canceled in a few months anyway. And so the kiss stayed.

"That is so-o-o-o-o-o find. When I get to know you better I'm going to ask for a ride in this Stingray. It's BAD, you know."

Unfortunately I can only give an answer that is based on my very old memories:

In William Shatner's book with his Star Trek memories, he writes about this episode and the kiss, as was already mentioned in another answer. Nichelle Nichols also gives her perspective in the chapter.

Now if I recall correctly, they write that they actually filmed two versions of the kiss: One where their lips touch and one were they do not touch. In both versions the mouths were actually concealed by their heads, so it should not matter, which version they used. However the directors chose the shot with the faked kiss.

I just recently watched this episode again and noticed that Shatners lips are not pursed. So even if their lips did touch in certain spots, it was not technically a kiss. Whether or not Nichelle's lips were pursed you cannot tell because of the head shift into the camera angle.

43
What Star Trek episodes (any series) have been censored?

6
Is there any basis for the Kirk/Uhura flirting?
14
Did Captain Kirk take advantage of Drusilla?
0
When did Kirk and Spock check the records in Assignment Earth?
34
Kirk and Spock friendship in Original Series
7
Did Kirk ever send multiple landing parties?
13
Did Uhura ever show evidence of older memories after The Changeling?
12
When was Uhura Captain of the Enterprise?
2
What is Kirk referring to when he says "Uhura, notify the Discovery on subspace radio"?
5
How did Kirk identify Gorgan in "And the Children Shall Lead"?
20
What did Kirk mean by "Wheels"?