Scifi novel from 90's with AI, robots, and a holodeck-like room

Can't recall what any of the title would be or who the author was. But the book involved the main character meeting a rich genius with a private island. He has an AI as his central computer, and it acted more like a teenage girl. His robots were emotional AIs too. And i remember a scene where part of their education was them in a room with a cow, they end up killing the cow and they learn how to control their robot bodies.

Also the main character ends up learning about the rich guys' plan for mining an asteroid as she is in a holodeck type room.

Seems like it should be easy to google this but my keyword combinations are coming up empty.

EDIT: OK someone else must have read this book. Let me summarize some more information I remember and see if that helps jog anyone's memory about reading this book.

I'll keep updating this post with more information as I remember. But the critical pieces like character names I just can't recall.

The female protagonist has some sort of psychology background and has caught the attention of the wealthy genius telco/data magnate mentioned above. He has an AI controlling his systems/satellites which is having some problems and needs a little 'help'.

You're bang on with the holo deck and mining of an iron asteroid that he has towed in from the asteroid belt as iron in space in FAR more valuable than gold.

If any of this helps please let me know the authors name and or the ISBN of the book.

I do remember the rich guy was wondering if someone with a psychology background (the female main character, who jumped into this assignment because of something that happened in her professional of personal environment) could help his robots to overcome some mental problems.

She doesn't know upfront what she's stepping into, and has to discover for herself what's really happening on the island, namely robots who procreates themselves, and learn by trial and error.

I remember the book giving examples as how a human would not calculate exactly how much coffee he can put in a cup without spilling it while walking around with it, we learn by trial and error, sort of "fuzzy logic" (don't know if that term is used in the book).

It looks like, Society of the Mind: A Cyberthriller. 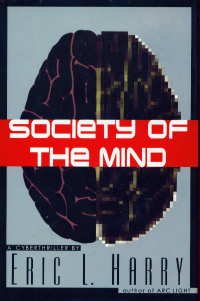 The comments from other people on this site that you've added also appear to match this book.

7
A 90s anime/cartoons/ with a main character who has a red mecha suit with a weapon like a spear
14
Fantasy novel with two dream-like worlds, one good and one bad
6
Story about robots which learn and age of information
4
Novel with a room with model sailing ship bifurcated into metal and wood
6
Help identify story: 80s/90s childrens book about a child in a society ruled by robots