How did Kakashi know Kushina will give birth to a 'son'?

Note: This is based off the latest manga scanned and translated by fans online and not the current manga in print. If you aren't up on the latest manga, this question contains spoilers 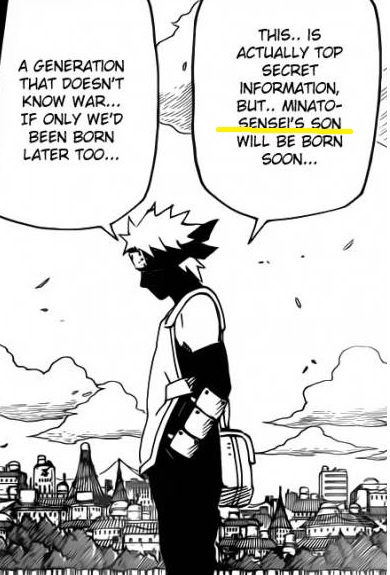 In Naruto Manga chapter 607 Kakashi visits Obito's grave and reveals some secret alongwith the fact that Minato will father a male child(not female). It was clear that Kushina would go into labor soon but in the Naruto's world gender of a child can't be judged until and unless the baby is born.(Due to obvious reasons) How did he come to know about this?

The Japanese and Chinese language don't distinguish male/female in speech sometimes (ie: in Mandarin, "he/his/him" and "she/her" are all "ta", with a difference only in its writing) and possibly in certain writing too. Though, the actual word used in Kakashi's speech was probably "child" (as in "sensei's child") without an reference to the gender of said child. For translation's sake, it was probably either easier use "son" than child, or the translator neglected the consequence of this hint when referring to Naruto and subconsciously indicated the child's gender, already knowing this child to be Naruto.

(extra info on languages and translations below. continue reading if you feel like it.)

In some languages, when speaking, people don't really bother to indicate the gender of the person on the go mainly because of excess words (ie: words used to refer to "son" are actually the combination of "male" and "child", so it would sound something like, "My male child is 6 years old."). Usually translations are hard due to many factors. One of them is the usage of words to refer to something (something that is 1 word in English may be translated to 3 put together in an other language and vice-versa). And we're not even talking about words/expressions/descriptions that don't exist whatsoever in some languages.

Not the answer you're looking for? Browse other questions tagged naruto or ask your own question.

5
Why didn't Kakashi use his Mangekyou for many years?
2
How did Orochimaru die a second time