How is the Ogier Loial able to drive back the shadowspawn?

Since joining Rand, Loial has shown the ability to fight and drive back shadowspawn such as Trollocs and Myrddraal. It is known that Ogier are peaceful creatures and are not used to weapons. I've seen Loial using a weapon made from a tree stick. However, I don't remember him using any other weapon in their journey.

If it is not the weapon, is it the size of his body that makes him so great at fighting?

In The Shadow Rising, it is written:

“Loial,” Faile said, standing up from behind one of the banks of flowers with a book in her hands, “is a hero.”

Perrin jumped; the flowers had masked her scent completely. Loial made shushing noises, his ears twitching with embarrassment, and waved his big hands at her, but she went on, her voice cool but her eyes hot on Perrin’s face.

“He gathered as many children as he could—and some of their mothers—into a large room, and held the door alone against Trollocs and Myrddraal through the entire fight. These flowers are from the women of the Stone, tokens to honor his steadfast courage, his faithfulness.” She made “steadfast” and “faithfulness” crack like whips.

Ogier were feared warriors during the Trolloc Wars. Quoting from Wikia:

They also seem to have served as feared warriors during the Trolloc Wars, so fierce they were not considered to be safe, though only warrior Ogier of Seanchan seem to have maintained this reputation.

The Ogier refuse to take any part in the wars of humans, and avoided the later War of the Hundred Years. However, they are 'concerned' with the Shadow and whenever the Shadow threatens the world the Ogier will march to face it, as they did in the War of the Shadow and the Trolloc Wars and may do again at Tarmon Gai'don.

The wiki also notes their presence in the Seanchan Deathwatch Guard:

The Ogier also live in the Seanchan Empire far across the Aryth Ocean; very little is known of Seanchan society or how the Ogier function within it, except that a division of the Seanchan Empress's Deathwatch Guards is composed solely of (free) Ogier, known as Gardeners, who carry huge axes and apparently do not have the same reservations against violence as Ogier in the mainland. 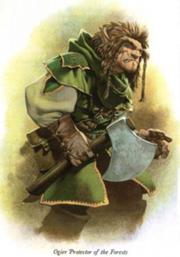 Caption: Ogier Protector of the Forest

Loial also favours the axe. From Lord of Chaos, Chapter 54:

And Loial, leaning on the longhandled axe he had found in the Sun Palace, with its ornately engraved head like the head of a huge woodaxe, stood still as a statue with his broad face truly looking carved from granite.

He wields it to good effect in the battle at Dumai's Wells. From Lord of Chaos, Chapter 55:

Snatching his axe free, Perrin hacked down a Shaido in his way and leaped over the man as he fell. They had to reach Rand; everything rested on that. Beside him Loial’s great axe rose and fell and swung, carving a path.

The similarity between the words Ogier and Ogre is not by chance :) That said, I tend to imagine Ogier faces as being more ... pachydermal, thanks to the emphasis given to their ears.

The Ogier are culturally conditioned against violence. But when angry they make fearsome warriors. This is supported by the saying "To anger the Ogier is to bring mountains down on your head".

The "Gardeners", a group of elite Deathwatch guards which act as bodyguards for the Empress is also solely made of Ogiers.

These indicate that as a race Ogiers can be very handy at fighting when they get to it.

It is also possible that the fact that he was defending children caused Loial to fight harder.

6
Why don't Uno and the other Shienarans go back to Shienar
3
How was Olver able to do it?
6
In the Wheel of Time series, was it ever revealed how Logain was able to resist the tainted saidin?
9
How was Ishamael able to visit Lews Therin after the Dark One was sealed away?
9
Could any of the "Chosen" have ever turned back to the Light?
6
Why was Rand not able to heal Tam in The Eye of the world?
33
Do the balefired souls get reborn when the Age comes back?
13
Do we ever find out who these Darkfriends are?
18
In The Wheel of Time, how were Aes Sedai able to be used as damane while under the Three Oaths?
2
Is there any clue in canon or interviews as to how Padan Fain was able to subdue a Fade?