Were there (or are there) any Dark Wizards who were Sorted into the Hufflepuff House?

I just finished watching Harry Potter and the Sorcerer's (Philosopher's) Stone on DVD. Not my first time seeing in the movie by a long shot, but Quirrell captured my attention during the film. He was a servant of Lord Voldemort I have heard on Pottermore that Quinius Quirrell was a Ravenclaw, and that Hufflepuff has had the fewest Dark wizards, so I started thinking of some famous Dark Witches and Wizards each of the four Houses may have.

Slytherin had Lord Voldemort (most famously, along with many Death Eaters) Gryffindor had Wormtail; Ravenclaw had Quirrell.

I have tried to find some Dark Witches or Wizards from Hufflepuff, but only in vain.

Are there any current Dark Wizards (most likely in Azkaban) or former Dark Wizards who are known to have been a part of Hufflepuff House?

The Hufflepuff welcome letter on Pottermore makes a claim about their Dark wizard turnout:

However, it’s true that Hufflepuff is a bit lacking in one area. We’ve produced the fewest Dark wizards of any house in this school. Of course, you’d expect Slytherin to churn out evil-doers, seeing as they’ve never heard of fair play and prefer cheating over hard work any day, but even Gryffindor (the house we get on best with) has produced a few dodgy characters.

Of course, take that with a pinch of salt, since it comes from a Hufflepuff prefect.

That it says “the fewest” might suggest that they have turned out a non-zero number of Dark wizards/witches in their history, but less than the other houses (so the answer to the original question would be yes). But I don’t know of any canon examples that back up that interpretation.

It’s also possible that this Prefect doesn’t know of any instances of Dark wizards in Hufflepuff, but doesn’t want to say “no Dark wizards” in case there are some that they don’t know about.

Comments in the Slytherin welcome letter also hint at Dark wizards across all three houses, but again fails to cite specific instances:

I’m not denying that we’ve produced our share of Dark wizards, but so have the other three houses – they just don’t like admitting it.

But again, that comes with the bias of being written by a Slytherin prefect.

Overall, I’d say it’s pretty likely that Hufflepuff have turned out some Dark wizards and witches, but they probably pale in comparison to the number and notoriety of those turned out by Slytherin, hence they don’t tend to get mentioned much.

Harry Potter Wiki suggests that Hufflepuff has the fewest dark wizards of any house, but I have found several accounts that suggest that they have none.

So either they have none, or they have a few very-unknown ones as at least one Slytherin claims.

In an alternate timeline, Cedric Diggory, a prominent Hufflepuff alumnus, suffers a deep humiliation during the Triwizard Tournament and ultimately becomes a dark wizard and a Death Eater.

SCORPIUS: He wasn’t supposed to do it alone. Cedric was supposed to win it with him. But we humiliated him out of the tournament. And as a result of that humiliation he became a Death Eater. I can’t work out what he did in the Battle of Hogwarts — whether he killed someone or — but he did something and it changed everything.

SNAPE: Cedric Diggory killed only one wizard and not a significant one — Neville Longbottom.

SCORPIUS: Oh, of course, that’s it! Professor Longbottom was supposed to kill Nagini, Voldemort’s snake. Nagini had to die before Voldemort could die. That’s it! You’ve solved it! We destroyed Cedric, he killed Neville, Voldemort won the battle. Can you see? Can you see it?

In an interview, JKR confirms that there are people connected with Death Eaters in the houses other than Slytherin, and does not in any way attempt to specifically exclude Hufflepuff.

ES: But there a lot of Death Eater children in the other houses, are there?

JKR: You will have people connected with Death Eaters in the other houses, yeah, absolutely.
- The Leaky Cauldron interview (July 16, 2005)

She doesn’t state explicitly that there are actual Death Eaters in Hufflepuff, and it’s possible that there are only people connected with them but no one who actually joined them there, but it seems likely from this that there would be at least one Death Eaters in Hufflepuff. The houses of many of the wizards that could be classified as dark, even the named ones, are not mentioned. For example, the houses of Barty Crouch Jr, Rookwood, Yaxley, and Rowle are never stated or implied. Any of them could be a Hufflepuff, particularly if they did not have strong traits of any of the other houses, as Helga Hufflepuff took all students.

“Good Hufflepuff, she took the rest,
And taught them all she knew,
Thus the houses and their founders
Retained friendships firm and true.”
- Harry Potter and the Order of the Phoenix, Chapter 11 (The Sorting Hat’s New Song)

Considering that Hogwarts has existed for centuries, and during that time there are likely to have been several Dark wizards who attended Hogwarts since its founding, it seems almost impossible that no Dark wizards were ever in Hufflepuff. This is particularly clear when it is kept in mind that students who did not fit into one of the other houses may become Hufflepuff because of the Founders’ individual preferences and Helga being the one willing to accept all students.

But there's this quote from the first book:

"Better Hufflepuff than Slytherin," said Hagrid darkly. "There's not a single witch or wizard who went bad who wasn't in Slytherin. You-Know-Who was one."

In the film, pretty much the same quote is made by Ron. This implies that all the dark wizards were from Slytherin.

Umbridge is widely believed to be a Hufflepuff, although in Pottermore it says she was a Slytherin, evidence suggests otherwise. The traights of a Hufflepuff are: Hard-working - she is definitely trying hard to ... give extreme power to the witches and wizards and destroy all muggles, loyalty - umbridge's blind loyalty towards the minestry makes people believe she is hufflepuff, friendship - still working on this one, and honesty - Umbridge is honest but not in a nice way: when she said she was going to punish Harry 'the way she think he diserves' she was brutally honest and used his own blood as ink and made him write lines.

Also, Helga Hufflepuff (the founder of Hufflepuff) looks a lot like umbridge. This might just be my imagination but look at the image attached. So she could be a distant relative of Helga's, which most definitely would put her in Hufflepuff. 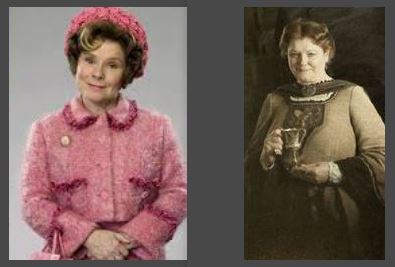 Not the answer you're looking for? Browse other questions tagged harry-potter hogwarts sorting-hat dark-arts or ask your own question.

123
Is Slytherin Evil?
23
Did any Gryffindor marry a Slytherin?
17
Are there any non-Slytherin Death Eaters (besides Pettigrew)?