What is "the prop" used in many Sci-Fi movies?

While watching the Crew Commentary on the Babylon 5 Pilot Movie "The Gathering", I heard JMS and John Navarro talk about "the mystery object", a prop which has supposedly been passed around and included somewhere in many Sci-Fi movies. It seems to be an inside joke in Hollywood. I've been looking for it, but I can't figure out what it is.

I think they are talking about the teddy bear.

The story goes something like that, J. Michael Straczynski, creator of Babylon 5, hates cute things. He promised there were going to be no children or androids in Babylon 5 (maybe in response to Wesley Crusher and Data). Eventually, someone gave him a teddy bear. A writer. And the saga begins.

JMS promised to get revenge and a paraphrase "by fucking up his script". It's somewhere on Babylon 5: Artifacts from Beyond the Rim. The teddy bear was pictured on a Babylon 5 episode when they open a merchandising store:

The writer then wrote a Star Trek episode, or some other series, where the teddy bear appears, in space, and one of the characters says:

Who would space a teddy bear?

Some more about it: Babylon 5 Easter Egg - JS Teddy Bear on The Easter Egg Archive.

Per FITorion's earlier answer, the 'Mystery Object' referred to in the Crew Commentary for "The Gathering" is known as the Oscillation Overthruster 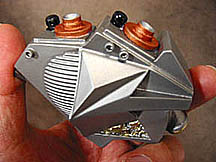 Voice of God (JMS himself) stated that John Navarro knows what the object is;

Now it's driving me crazy -- did John ever tell you what the mystery object was that has supposedly appeared in every sci-fi movie/tv project? And, more importantly, is it true?

There was a group of folks in the art department who were referred to jointly as the Woodland Creatures...Dark[Hoffman], Bear [Burge], and Dragon (two of which are real names, the third is a nickname, I'll let you do the investigation on that one). There could not have been a more apt description of these guys...

And an archived interview with John Navarro on JMSNews confirms that the object in question is the "over-thruster" originally used in Buckaroo Banzai;

"Well, this thing has been driving me crazy for several days, and I finally found a bit of time to comb through some old interview notes, and I'm 99% convinced that the object in question is the over-thruster from Buckaroo Banzai. During production on B5, I spent a fair amount of time with the props guys Bear Burge and Dark Hoffman, and they were nice enough to give me a tour of the prop cage and let me take some photos for an article I had hoped to do for the B5 Magazine. For those who haven't seen it, the prop cage was like a wizard's cave of cool B5 stuff, basically every object that had been purchased or built from scratch for the series, all crammed into shelf after shelf. And one of the items that Dark Hoffman showed me was the over-thruster, which I think had appeared as a piece of Whitestar debris in one episode. But one of the guys told me that the object had been handed around to other prop department guys on other shows and movies, who would then do their best to work it into a shot. I think it was a private joke amongst themselves, not really meant for anybody else.

You can read a list of properties (including Star Trek, B5 and others) that the prop has been used in 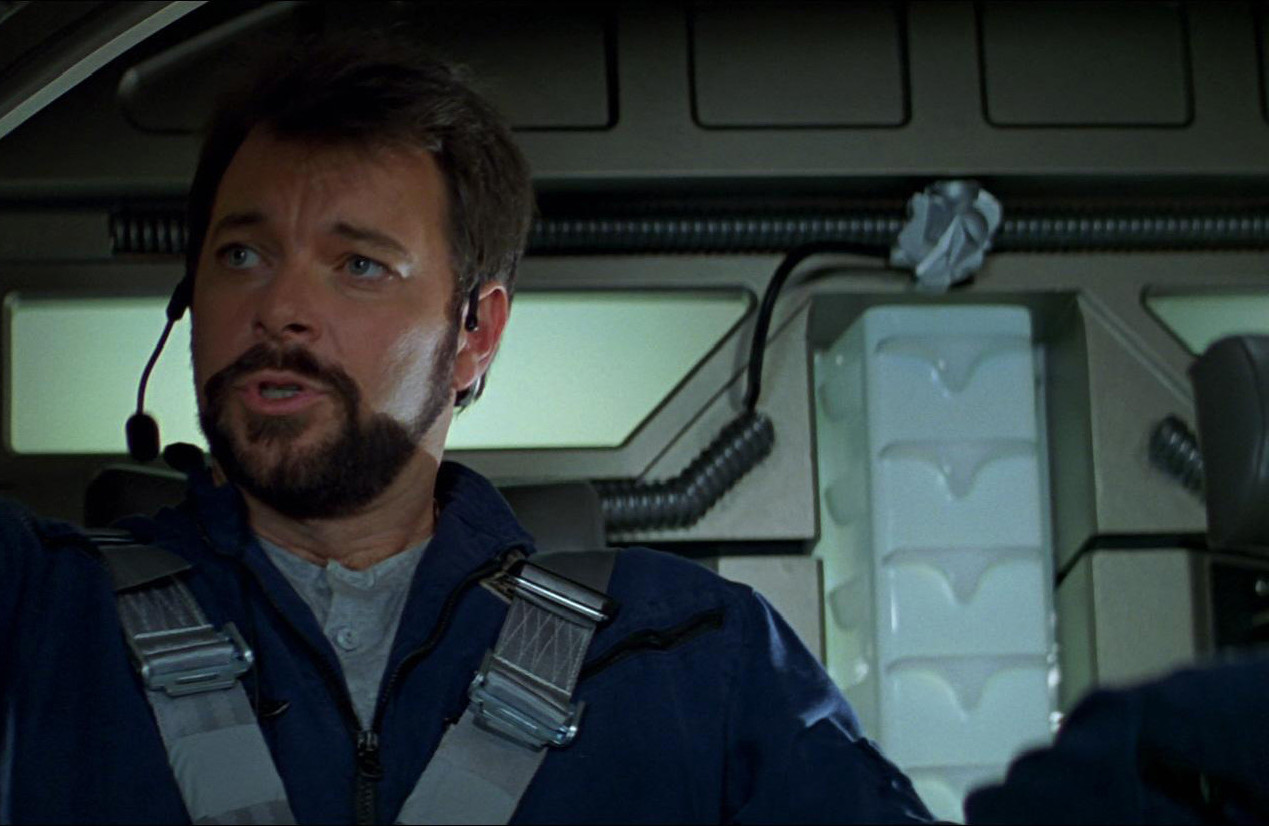 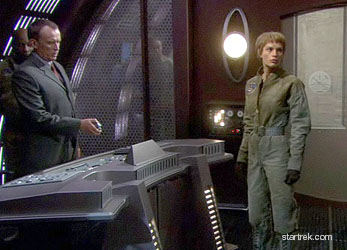 A Prop newspaper has been in dozens, maybe hundreds of TV programs, among them various SF episodes.

I have a feeling it may be this item, featured in Star Trek Voyager in the Project Pathfinder lab: 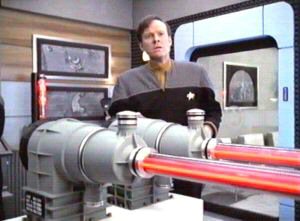 I've seen this prop loads of times, maybe some others can confirm this, there was also a couple of props in this same lab - one which had two large handles (like Joysticks) which had lights on which Dr Franklin used in the first season in this lab too, but this is not shown here. There are some more images of props I'm sure have appeared a few times in B5 and Star Trek at the source : Pathfinder Lab - Star Trek Voyager.net

This prop has been used in many Sci-Fi projects including Star Trek, The Incredible Hulk Returns (1988 TV movie), V (the old one), The Last Starfighter, Buck Rogers and oddly enough in AIRPLANE II: The Sequel with William Shatner who would again encounter it in Star Trek V: The Final Frontier which William Shatner directed and starred in! 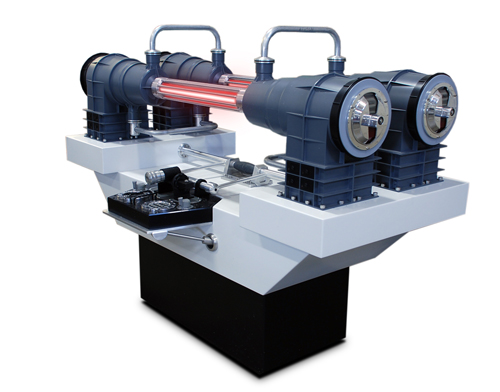 (It can be rented from ModernProps.com for $775 for the first week, in case you want to be in on the joke.)

I really doubt that it is found in other Sci-Fi shows but Han Solo in Carbonite found in quite a few scenes in the Firefly series as a prank.

The prop is described as smaller than a bread box and bigger than a coke can. It has nothing to do with the creators or writers of Babylon 5. Babylon 5 and many other shows rent props from various prop rental companies. The company B5 rented from has employees with real names like Bear or Deer or other things like that and have jokingly become known as the "woodland creatures". This company has a prop that they make sure appears in the background (usually on a desk) of every show they work on.

A teddy bear would fit. But the addition of the story that it was a joke on JMS to get something cute into the show ... eliminates it as an option. It could be that black viewing device someone mentioned... but that seems larger than a bread box to me. I don't know what it is. The mystery continues.

Doing some further research... Oscillation Overthruster Seems to be the thing. As I'm now going back through every B5 episode I will keep my eye out for it.

The Prop you are speaking of can be best seen in the original "V" series. Towards the end you will see a device on the console they use to try to turn off the self-destruct program, next to the child as she puts her hands on the turn keys and begins to glow.

The prop is a black box like construction about the size of a breadbox. It has a top part that flips up and has blinking lights on it. The flip up part has an "X" light on it.

I figured it out after watching Babylon 5 and hearing about it. In the episode where the science shuttle is taking readings from the planet the station orbits, it is used by the Asian actor.

I have seen it in other shows too, can't think of them off the top of my head. One was in a medical room in the background.

Hope that helps, sorry I couldn't offer more at the moment.

None of these fit, except possibly the bear, though I can't think of seeing a teddy bear in very many sci-fi. It was John Iacovelli who confessed it's existence to JMS, on the commentary of the B5 pilot. He refused to spoil what it was, but gave the hints that it is larger than a soda can, smaller than a bread box, and innocuous enough to fit into almost any scene. Someone once suggested to me that it might be a book, which fits (even in futuristic settings where paper books have fallen into disuse there are often a few in the possession of some of the more nostalgic characters or in time-travel episodes, archaic cultures, etc.), but I have yet to spot a specific book recurring in multiple shows and films.

Not the answer you're looking for? Browse other questions tagged movie science-fiction-genre props or ask your own question.

47
What is that high-pitched sound from all those 50s sci-fi B-movies?
4
How was the robot controller prop made in The Runaway Bride?
7
Film or book trilogy about sentient weapons
15
Is this Star Trek's most used background prop?
15
What happened to the prop ships and monoliths used in 2001: A Space Odyssey?
18
What happened to the original Jurassic Park gate prop?
32
What is the prop for Thor's hammer (Mjölnir) made of?
19
Are there any designs for Sulu's rising targeting scanner prop from Star Trek: The Original Series?
10
What happened to the Millennium Falcon hanging dice prop?