Story Identification: 1980s series about four characters who escape a post-apocalyptic city in a bubble

From what I remember the animation style was quite similar to The Mysterious Cities of Gold. I have a feeling it was a Japanese/French collaboration.

There was a city in a bubble, somewhat post-apocalyptic. From what I remember there were lots of robots and no people left in the city, only cyborgs.

It focused on the story of four people's escape, two children and woman and a man (a soldier). During their escape the man gets cut, and it appears he's got robotic circuitry underneath his skin. Eventually, they get to the centre of the city to the robot control centre (?), only to find a boy controlling the robots. Eventually, they escape, and the world outside the bubble is revealed to be full of life.

Sorry for the vague description; I have a feeling I may have added details from other movies I saw as a kid.

The "four people's escape, two children and woman and a man" part made me thought of Spartakus and the Sun Beneath the Sea, (Les Mondes engloutis in french). But I don't remember the rest of the series well enough to say if it fit with the rest of the description. 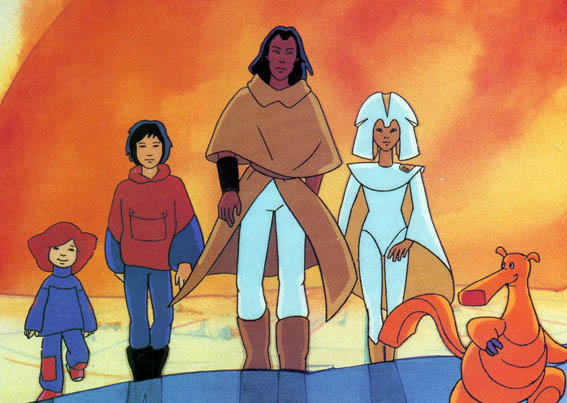 Reading further (both on English and French sites) didn't gives me more clues, there is some robots, but there is also others humans survivors. Spartacus was not a soldier but a gladiator and I don't think he was a cyborg, but he did had a magical gauntlet. But since you were dubbing about those details, it may be a good start. You may have seen a single episode of the series.

Is it possible this is The Body Electric? It's detailed in this other question: Cartoon movie where the main character had a robotic arm.

It's also the answer to my question so I guess maybe there are three duplicates?

The story for The Body Electric is about the humans of Red Sector A being forced to leave the city by a robot uprising but that was rather short sighted on the robot overlords part as everything begins to decay and fall into ruin including the a shield generator that is about to reach meltdown…which is a bad thing for the two young humans who are exploring the city.

Can Woody and Andrea make it past the robots alive? Will they be able to escape the city before the meltdown? What made the robots take up arms in the first place? Find out for yourselves when you watch The Body Electric!