Movie about a paranoid hacker being pursued by some agency [closed]

Ask Question
Asked 8 years, 10 months ago
Active 8 years, 8 months ago
Viewed 936 times
10
Closed. This question is off-topic. It is not currently accepting answers.

I'm searching for the name of a movie a saw long ago.

I'm not sure, but I think it's a pretty old movie (60´s - 80´s) in black/white.
slightly depressing atmosphere, psychotic style, underground movie.

A guy lives in a small apartment with lots of computers and parts, so he is some kind of hacker. He becomes more and more paranoid over time due to his works, and at a time he has to go outside (can't remember why).
He has a suitcase, I think with money or secret information and he is scared about being followed.
There was something going on with his pursuers (FBI or CIA).

A main part of this movie is his room, and I think there where some bugs/ants crawling over the electronic parts.

This is probably Darren Aronofsky's Pi released in 1998, but I could easily see the black and white, gritty feel of the film leading you to believe it was older. The film is intentionally over-exposed and grainy - evoking the feel of films from the 30's and 40's. 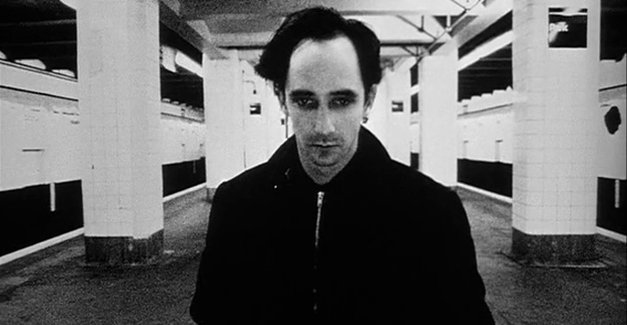 It involves a mathematician searching for a unifying theory based on numbers. As he believes he gets closer and closer, he goes just a little more insane. Other groups become interested in his work and want to steal it, so he becomes more and more paranoid. In particular, a Wall Street firm wants the work as they believe it can predict the stock market.

A group of Hasidic jews are also after the work as they believe it reveals the true name of God.

Insects, particularly ants, are used to up the bizarre feeling of the film. The ants, specifically, are all over his room and on his computer, Euclid.

13
Movie about some cowboys who travel into the future (to our time)
8
Movie Id Where Hacker Has No Monitor
7
A woman on some kind of spider web being raped by some kind of spider alien/monster?
3
Movie about two sisters, the bigger one being evil with magic
11
Looking for a late 1950s to early 1960s movie or TV show with some similarities to "The Zanti Misfits"
12
Low budget alien movie about the Earth being cooked
9
B-class sci-fi movie about postapocalyptic group of soldiers moving from outpost to outpost, with some of them being cyborgs (or diseased?)
8
Movie about a man eventually being electromagnetically attached to a woman?
4
Movie involving some kind of sentient blue being