Has there been a story of Predators mutated by and into Aliens?

In Prometheus, the Engineer was forcefully impregnated by the mutated octopus-like love child of Elizabeth Shaw. After its progeny burst from the Engineer's chest, it resulted in the original Alien creature that first appeared with Ripley.

Now since there is Aliens vs. Predators which never has been taken seriously compared with the original story line in my opinion, but I have to know, has there been a case where a similar mutation occurred with Predators?

That would have to be a very bad-ass combo although I have to lower myself in IQ by asking that.

Aliens vs Predator: Requiem showed us what a Xenomorph would look like after gestating inside of a Predator: 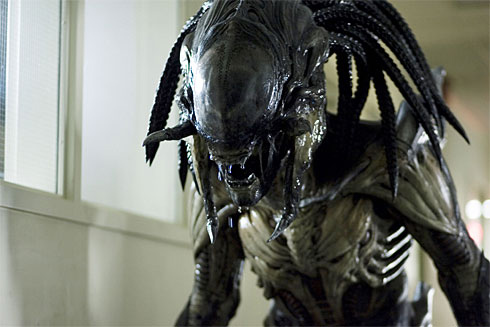 No fully developed Predator/Alien hybrid has ever been seen in cinema but at the end of Aliens vs Predator, we see the dead body of the Predator on their ship sprout the head of a hybrid as the movie ends.

The "Predalien" from Aliens vs. Predator

In Alien vs Predator 2 theres an abomination, basically crossover between an alien and a predator. mutation. but no fully developed

Not the answer you're looking for? Browse other questions tagged aliens alien-vs.-predator or ask your own question.

22
How did solitary aliens reproduce in the Alien franchise?
18
What purpose does acidic blood serve to a Xenomorph?

14
Why do Predators flay people? And what do they do with the skin?
13
How can there be a Xenomorph skull in the Predators trophy case?
9
How do the Predators select and transport their Trophies?
2
How do the Predators' Smart-Discs extend and retract?
5
Doesn't "Alien vs Predator" contradict the previous movies with regards to Predators and their relation to heat?
14
Looking for a short story where hostile aliens are tricked into curing cancer
2
Breeding of predalien and predators
13
Web story about aliens who twist humans into various sub-humans
17
Aliens attack space station and dissolve humans into food
13
Story where aliens are like giant tarantula hawks, implanting eggs into human hosts