What is Iron Man's flight range and max air speed?

EDIT: Just found this (funny) image, New York to Washington in under an hour?!? :) 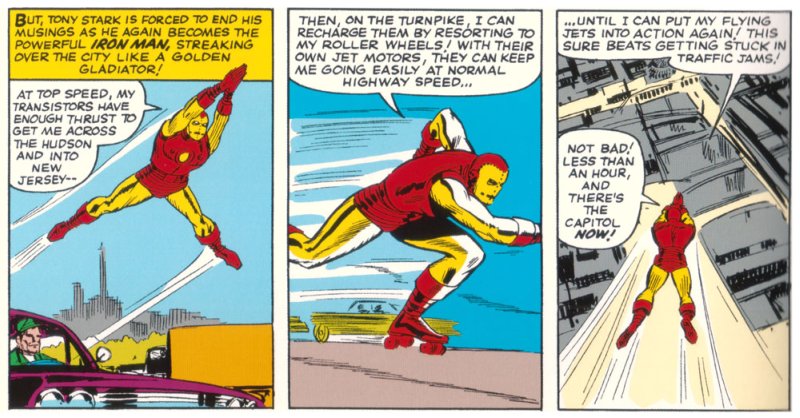 Iron Man in the comics has had multiple suits of armor each with varying capabilities. His earlier suits are far less powerful than his later designs and his latest designs are only incrementally more powerful with each iteration. What they gain is greater mobility, ease of use (though probably not of design or repair) and overall durability. While each suit has increased his power significantly he is still third in overall fighting capability after Thor and the Hulk.

In the extras from the DVD, an omitted scene had Tony Stark already on the Middle East via Stark Industries jet and holding a function/soirée, these scenes were later edited out -likely for brevity.

Your comic strip and the movies aren't compatible. In movies (and, many comic series), Ironman's armor is powered by portable fusion reactor.

If we believe Avengers movie (which is in canon with Ironman movies), he can circle the globe many times without reactor replacement (In Avengers, he used his weaponary system for many hours).

When it comes to speed, it has never been mentioned directly in the movies. But, we've seen him flying faster than a nuclear missile (Avengers movie). It means, he can travel at hypersonic missile speeds like 2.5miles/s, 5miles/s etc. He might have traveled to Afganistan faster than this because he combat against the same terrorism he just watched on LIVE TV.

I think that the best answer is that since the iron man has an ARC reactor which basically is a super power source which never runs out, well it does but after approximately 400-600 years, well beyond the human life expectancy. Now in his boots, tony stark has some sort of very powerful rocket engine which seems to last for ever, this is because the rocket is a VASIMR engine or something equivalent to it in the marvel world.

This type of engine can use any gas as fuel and act as either a rocket or ion thruster enabling very high efficiency, simply such a highly technologically advanced suit can simply extract hydrogen from the air by pressurizing and condensing rammed air thus giving water, then through electrolysis hydrogen is used to power the equivalent VASIMR engine, and since oxygen is also produced, it can be used to supply oxygen to the suit's user, enabling the suit to fly incredibly high where the atmosphere is thin enough to cause minimal drag yet provide enough water vapor for the suit, in case the suit needs a quick refill, it can simply descend to lower altitudes where the water vapor content is high, by flying at high altitudes it is able to achieve hyper sonic speeds of mach 5 (3840mph) since drag is very low. Also it can use ambient air to mix nitrogen with oxygen to get the 78%-21% mix which humans need to breathe properly at approximately 14 psi of pressure so that the suit remains pressurized.

Not the answer you're looking for? Browse other questions tagged marvel marvel-cinematic-universe iron-man physics or ask your own question.

-1
How far can Iron Man fly in one go?
14
Does Flash age slower because of his ability to run at relativistic speed?

49
How much did Iron Man's suitcase weigh?
4
How could Rhodey fit into the Mark II armor?
15
How does Iron Man's Arc Reactor work?
57
Why is there Iron in Iron Man's name when there's nothing iron about it?
13
How do the Avengers communicate?
1
What's the cost of Iron Man's armor?
37
What is this text near Iron Man's rockets?
11
What exactly are Iron Man's Repulsor blasts?