Can Iron Man recharge his suit from lightning?

I watched The Avengers (again) and I got the following question.
Near the beginning where Iron Man and Thor fight, at one point Thor hits Iron Man with lightning, and then comes the hilarious quote, where Jarvis says "power levels are 400%".

I get that this is a very funny line from Joss Whedon but then it got me thinking, is this a reference from the comics?
Can Iron Man harvest energy from lightning and recharge his energy levels?

In the Marvel movie universe, Iron Man's armour may not specifically absorb lightning, but it is apparent that it can absorb, specifically, Asgardian lightning. The energy generated by the armour's Arc Reactor is the same that is generated by Thor's hammer, as the Arc Reactor was developed by reverse-engineering the Tesseract.

A more detailed similar answer to another question: Are HYDRA's weapons related to Iron Man's repulsors?

According to the Wikipedia page on Iron Man's armour, a number of models of the Iron Man suit have had the ability to absorb energy attacks. The first instance I can find on the page is on the 'Renaissance armour' from 1998. However, when I was playing the Marvel Super Heroes RPG back in the Stone Age (late 80s), Iron Man (based on the Silver Centurion armour) had the same ability.

It seems likely this would be a defensive mechanism built into the Iron Man armor. Energy does damage when it encounters things that aren't able to handle it, to oversimplify the matter. It would make sense for Tony to design the Iron Man armor to have defenses against energy attacks. To do so, he would need to deflect or channel incoming energy away from parts of the armor which could be damaged as well as his body.

As depicted in the movie, there appears to be some of both involved. First, you can see the electricity arcing around the outside of the suit and into the ground -- this is energy that the armor has safely deflected into the ground, rather than allowing the electricity to run into the suit; this electricity remains on the outside of the suit, where it does only superficial damage. Secondly, and more relevant to your question, is the energy that is absorbed. As this energy comes in, it is siphoned off to the safest place it can be -- the energy reserves of the Iron Man armor (although it is not clear to me if this is some sort of battery, capacitor, or a function of the arc reactor itself).

Jarvis' quote indicates that he has channeled so much energy into his energy reserves that it is four times the amount of energy he can safely store for any length of time. Again, he has to channel it elsewhere to keep from overloading the suit. With the energy harnessed in a (somewhat) controlled manner at this point, he is able to fire the rest of the energy out through the unibeam, thus reducing the amount of power he is storing in his suit.

Also keep in mind that in the movie canon, the Iron Man armor is evolving rapidly. In Iron Man 2, Whiplash is shown to be able to do some damage to Iron Man, but even with that suit Tony is able to withstand the electric attacks from Whiplash. It is likely that the improvements made to the miniaturized arc reactor in that movie, as well as the realization that he could in the future face off against other foes with similar energy-based attacks (as the source of Whiplash's energy was of great plot concern), that Tony has specifically been working on the Iron Man armor's ability to withstand electrical attacks.

Yes, the capacity is within the boundaries established by the character in the canon Iron Man comics, though rarely seen, it was possible.

The first suit of Iron Man armor in the comics to be able to handle a million volts of energy and absorb or deflect the damage was the "Silver Centurion" suit which debuted in Iron Man #200 vs Obediah Stane's Iron Monger. 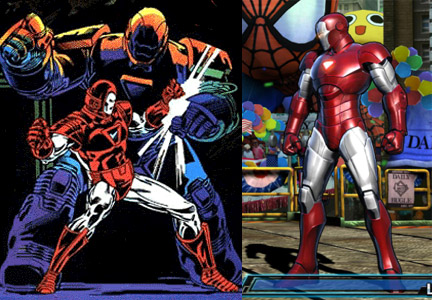 His earlier suits had capacities for absorbing energy in limited amounts using a refractory coating and linking the power to his capacitor pods on the hips of the armors. When Stark made the redesign to the Silver Centurion, he modified its capacity to allow it to draw energy from any external source.

In Iron Man #204, the Centurion armor absorbed a million volt charged-plasma beam, adding it to Iron Man’s power. He channeled energy from an AIM atomic reactor, which allowed him to lift their massive sub out of the water and fly it 2 kilometers to dry land.

The Iron Man Armor Mark VIII version II also had the capacity to absorb solar energy and to channel energy from attackers into power for Stark to use. This technology is incorporated into the Silver Centurion specifications.

Cinematic Iron Man's technology is not based off of the Tesseract/Cosmic Cube, nor is it related to Asgardian technology/magic in any way that, we the viewers, have been privy to.

I haven't ready every Iron Man comic but it's obvious that it can happen because it does happen in the film.

However it's unlikely that it would be easy to 'harvest' lightning under general circumstances because it's very difficult to predict when and where lightning will strike thus making it a much inferior method than simple recharging.

It's more likely that the suit is insulated to prevent damage from lightning strikes, similar to the way military aircraft are protected, and that this was a one off event or that Thor's lightning has a special property making it 'only strike down evil' or something similar.

He can't absorb it in the comics. Mighty Thor issue 590, Thor strikes Ironman with a lightning bolt. The suit suffers total system failure!

It was my understanding that the Mark 7 (and possibly all prior and/or subsequent armors) have a "Faraday Cage" built in :http://en.wikipedia.org/wiki/Faraday_cage or are designed to at least emulate that effect.

I think this would be a very logical and safe component to the suit for someone who is frequently zooming around in the atmosphere in a big, man-shaped potential lightning rod at any given moment.

Not the answer you're looking for? Browse other questions tagged marvel-cinematic-universe comics iron-man marvel or ask your own question.

49
Which films should I see before "The Avengers"?
45
Why didn't Tony Stark ask Thor to charge his suit with lightning?
8
When did other superheroes and the public find out Tony Stark was Iron Man?
1
How can Iron Man's repulsor gauntlet work after Thor crushes it?
9
Can Iron Man's robots (or JARVIS) lift Mjolnir?
19
How can Hank shrink without his Ant-Man suit?
3
Has Iron Man ever had a suit without flight, and if so, how effective was it?
1
What happened to Iron Man's armor from Mark 51 to Mark 84?
4
Did Tony base J.A.R.V.I.S. off of the real Avengers butler?
3
Has Iron Man visited the ''quantum city''?