How and where are those giant starbases built in Star Trek? How long does it take to build one?

We know ships are built in shipyards and take few months to be finished. But how are those giant starbases built? Those screened on screen seem to be a hundred times larger than the Enterprise, so my questions are: 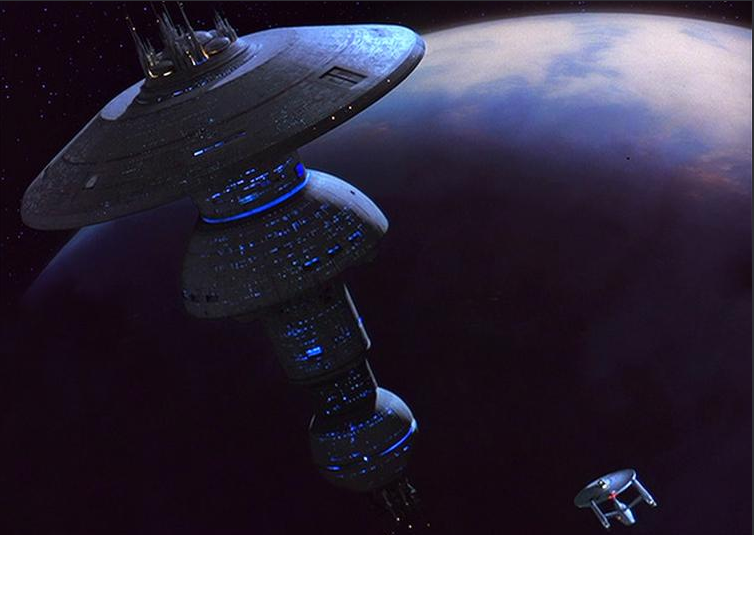 I can only provide a partial answer to point 2 based on some numbers from a soft canon source the Star Trek Online MMO where players have the option to build their own starbases.

In that universe it is expected that a fleet of captains will be able to complete their starbase in an absolute minimum of six to seven months.

Edit: I found a couple of additional points related to the building of Deep Space 9:

The station was of Cardassian design, built by Bajoran slave labor between 2346 and 2351.

So DS9 took five years to build. However it's replacement Deep Space 9 II was built much quicker:

The skeleton of the station was laid out by the Starfleet Corps of Engineers in 2383 under the supervision of Miles O'Brien,

From an Engineering veiwpoint, and based upon the sheer size. I would hypothesize that for the Big stations, such as Earth Space Dock, it would take 3-5 years, with the segments being built in an asteroid field, and then moved by tugs to where they were gamma welded to each other.

Other stations like Regula 1, the Office Complex in TMP, were smaller and could be towed into location with dedicated tug ships, and might take months to be built.

As for DS9, I don't think each station had maneuvering thrusters, and those were supposed to be station keeping thrusters (remember Empok Nor wasn't around a planet.) The only reason DS9 moved was to protect the Wormhole from the Cardassians.

What would impress me the most would be the fact that any government could compromise long enough to build 182 of these starbases. Today, we can't even compromise enough to keep the ISS up and running.

Novels are not canon... and lets not forget that use of automation would have to be paramount in space (which is thousands of times faster/better than humans/humanoids).

Let us also recall that in ST Voyager, it took the crew about a week to build the Delta Flyer... and again we don't know what it took to built it (the way it was portrayed, it seemed as if the crew mainly did it - which to me is ridiculous). Voyager has an assortment of technologies at its disposal such as tractor beams and replicators, and their computer is highly advanced (meaning, it can do the construction all by itself).

If anything similar to 3d printers exists in Trek in the 23rd century (which the probably do and are far more advanced/faster than what we have and would likely predate the replicators), then it stands to reason the Federation could easily deploy these automated construction 3d printers to build a starship in a very short span of time (within a month possibly).

A space station (depending on size) would take longer... but this depends on how many theoretical automated 3d printers are used in construction vs a starship.

In the 24th century, I don't see why replicating whole starships... or most of them in pieces, would be impossible. Drydocks and construction facilities have massive energy reserves at their disposal, and replicators in that time could easily be drawing Zettajoules of power directly from the star itself in addition to using Matter/Antimatter.

For the 23rd century, a similar process would likely take place using 3d printers that can produce whole structures... along with internal circuitry (btw, 3d printers CAN 'replicate' houses with electrical wiring btw) in a very short span of time. And since the Federation was usually portrayed as an organisation that creates modular type technology... it stands to reason that as others have said, these structures would simply be attached to each other upon completion.

So, how fast something would be built depends on how much automation you really throw at the task.

The 24th century can easily replicate everything into existence by converting energy into matter. The 23rd would need access to raw materials... and those are usually pretty much common throughout virtually every solar system. And since technical efficiency allows us to do more with less, the Federation would likely be able to take a very miniscule amount of materials and use them in a creation of a starbase (which could conceivably take about several weeks to months until completion or less - automation is exceedingly efficient and fast... plus, we cannot simply view things from a slower point of view as it's happening in real life... the Federation is massively far more advanced in comparison to us, and we are capable of some amazing feats... the Federation would in comparison be thousands of orders of magnitude faster/better than us (and that's at a bare minimum).

Since no one has a definitive answer, I will share mine as a plausible response. A new Parking garage was built next to my office, and I watched the crews bring in sections of it every day and they were all put together to make the finished product. I'm saying they might have made the station somewhere else, such as Utopia Planitia Shipyards for example, then had it moved in sections to their final destination. The sections could easily be towed by a large Starship or the equivalent of a barge. The interior would be a simple matter once the outer hull was constructed and sealed.

105
Does no one run in Star Trek?
4
How long did it take Data to build Lal?
90
Was Voyager really significantly slower than the Enterprise-D?
16
Why are Star Trek ships (mostly) built by hand?
18
How long does it take to cross Federation space?
1
How big are the Starbases on Star Trek
10
Are clinical trials done in the Star Trek universe?